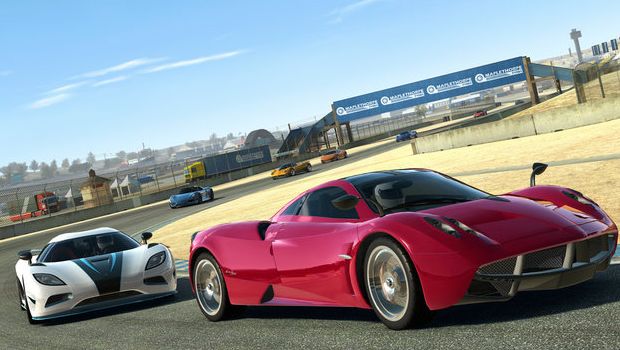 While I really don’t think there’s anything inherently wrong with free-to-play games, they can definitely be problematic — especially when a developer places the mental pummeling of customers above gratifying gameplay. This is what has happened with Electronic Arts’ Real Racing 3 — a game that can cost you up to $500 in microtransactions.

Although free to download and play, the iOS/Android game cripples the player at every turn, forcing them to wait to perform actions or otherwise spend real cash and acquire things instantly. For fans of the Real Racing series, the introduction of incredibly obtrusive pay walls has proven controversial.

“First, the game forces you to wait when you upgrade your car,” writes Ben Kuchera, in his Penny Arcade review. “The first upgrade I bought for in-game cash took two minutes to install in my car. Or I could pay gold to get the parts instantly. There is no game play reason to make upgrades take time to add to your car; this was done simply to get gold out of the player.

“You can always buy more gold after all. Your car will suffer from wear and tear in the course of normal racing, even if you don’t take much damage, and those repairs also take time. Because the most fun you can have in a game is paying money to end a needless wait.”

Many “freemium” games attempt this scenario — where you can put in the work to gradually unlock content, or open your wallet for instant stuff. Done right, this can work out well. Blacklight: Retribution remains very enjoyable without you ever having to spend a dime, and is fun enough that eventually you pay because you want to, not because you feel like you have to in order to keep playing.

This is not what Real Racing 3 does. Yes, you can theoretically play to earn gold and unlock stuff, but the grind is tedious to an excruciating degree. Buying in-game currency gets intensely pricey — with 1,000 gold costing $99.99!

148 Apps did the calculations and concluded it would take 427 hours to unlock all of the game’s cars. To buy them all would cost $503.22. Now, any freemium game will likely end up costing radical amounts of cash if you buy everything, but the game is so extreme in its methods to encourage in-app-purchases, the net cost becomes that much harder to forgive.

I gave the game a go myself and found myself hit with a 14-minute waiting period on my first upgrade. Between repairs, new cars, and upgraded parts, the game is designed to bleed your in-game currency fast and quickly move onto your real-life dollars. Like Final Fantasy: All the Bravest, the motivation for the game’s existence — to simply acquire money — is worn almost contemptuously on its sleeve.

Reactions from other games media writers have been less than pleasant. The Verge says Real Racing has been “ruined,” while Kotaku uses the more evocative “strangled.” The fans seem to agree.

“Would have been an amazing game if it wasn’t for all the freemium stuff and the waiting for cars to be serviced which is quite annoying so deleted it,” writes one player on the game’s Facebook page.

“Too bad EA had to kill a good, hyped game with the IAP,” adds another. “It takes away the fun of playing this type of game. Greedy publisher!”

On iTunes, the game’s user reviews are less than glowing. One of the one-star reviews says, “I’m really upset. I love RR and RR2 by Firemint, but then EA had to come in and buy them out and now RR3, while still good and made by the people of Firemint, is ruined. I would much rather pay $10 for the app and have no in-app purchases then have it free with ads and constant prompts to buy.”

The controversial release of Real Racing 3 coincides with Cliff Bleszinski’s defense of microtransactions and assertion that videogame companies are above criticism in their pursuit of money. While his “don’t like it, don’t buy it” attitude is a popular one, situations like this demonstrate a major problem — games that people love being brutally twisted to serve a new business model that infringes upon the gameplay and turns the experience into little more than a money delivery system.

Real Racing was a popular series, beloved by fans. EA acquired its developer and upended everything — and this is one of the things people really hate about microtransactions. Sure, they can just refuse to buy a game that boasts them, but that doesn’t make witnessing the corruption of a series they loved any easier.

Kuchera said earlier this week EA was just doing what it takes to survive, but even he found Real Racing‘s scheme excessive in its methods. Things like this go beyond justifiable survival, and become something one could describe as “tacky” if they were being very, very nice. EA’s not trying to simply keep its head above water as it perverts the freemium model for its own ends, it’s trying to get away with as much as cash as possible in exchange for the least amount of product.

That may be what it “exists” to do in the eyes of some of its defenders … but that doesn’t make it any less grotesque.