What does it mean to be hardcore?

[This month Destructoid celebrates 7 friggin’ years of whatever it is we do! Here’s the most popular article of this weekend, back in 2007, and easily one of my favorite story headlines of all time. Check our Golden Archives for more top stories from our past. -Niero]

I don’t know, but it’s likely that you know better than I do; maybe you’re the hardest of the hardcore. You probably drink Bawls by the crate, upgrade your computer more often than you change your underwear, and can direct air traffic with the orange glow of fingers long since stained by years of Cheeto abuse. Maybe you’re reading this article on Opera via a DS emulator running in Linux installed on a PS3 water-cooled by the tears of weeping babies. Hardcore.

You and I probably feel differently about this whole “hardcore” thing — matter fact, I’m sure we do. There are some insist that hardcore gamers must do certain things, play certain games, partake in specific experiences to deem themselves hardcore. Still others go on to define what they feel is a “true gamer”, laying down all kinds of crazy criteria they deem necessary to weed out the gamers from, well, everybody else. Similarly, I’ve got my own ideas, chief among them the notion that the current climate of gaming has turned us all into pansies — specifically, pansies dependent upon the domination of other, lesser pansies to make us feel less pansy.

And if you disagree, here’s another question: when’s the last time you picked up a shmup?

Take a look at that video — it’s likely that you’ve seen it before. What you’re watching is a dude playing not one, but two ships simultaneously in Treasure’s most notoriously difficult game, Ikaruga. Watching this guy play is like poetry; each motion is precise, guided, informed. You can tell that this is a fellow who knows exactly what’s about to come and has studied the game longer than we’d perhaps care to imagine. Some will be quick to point out that a key part of the player’s performance is memorization, and this is true, but how does it make this any less impressive than, say, mastery of a particularly difficult piece on a piano?

But something keeps me returning to the genre despite my repeated failings to perform well in it; some element of gameplay that goes beyond playing a game simply for the sake of completing it. For the record, of my current stock of oft-played shmup titles (including Ikaruga, Gradius V, Castle Shikigami 2 and Mars Matrix), I’ve beaten only one. I’ve died so many times in Ikaruga‘s Stage 3 that I’ve lost count of the hours invested in just that single level, but it never fails to be fun.

As Tycho of Penny-Arcade mentioned in a recent post, some people like to win games while others like to play them. If my chronic beatings at the hands of these games and my consistent return to them are any indication, I’m most certainly in that second category.

Here’s one way of putting it, though it borders a little too closely to that screwy new games journalism way of seeing things for my own comfort: shmups are about as close to purity as games are bound to get, and the opportunity for mastery that they offer is something that I sincerely believe to be exclusive to the genre. Kicking the everloving shit out of a shmup is a completely different sort of experience than pwning n00bs in Halo 2 and, I’d wager, one that marks and sets aside the truly “hardcore” from the rest of us.

Of course, s’just my opinion. But I’ll be sure to explain myself in just a moment. 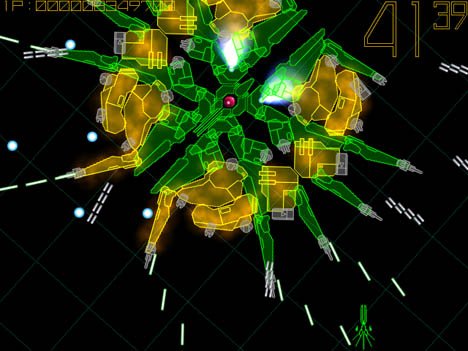 Those of you who keep up with ol’ Linde know that I have a boner for any game that “rewards expert play,” and I’ll take a moment to explain that before I take you deeper into this convoluted nest of lunacy. Some genres like RPGs, first-person shooters, and most platforming titles offer a fairly simple goal for their respective schemes of gameplay: get from point A to point B while negotiating obstacles along the way. There’s nothing wrong with that. It’s a solid foundation for any game. To shake it up, however, some games like God Hand, Donkey Kong Jungle Beat and Devil May Cry 3 incorporate systems that push you to play with as much finesse as possible; such games encourage a deep understanding of the systems in play, or at least enough to play well as opposed to just completing the task at hand.

These games — with the exception of Jungle Beat — are also considered to be fairly difficult and, in the case of God Hand, prohibitively so. Most if not all of Dead Rising’s negative PR was focused solely on its somewhat unforgiving save system, a system that often had gamers restarting from Day One rather than reload a save from an hour or two of gameplay back; there were lots of complaints. I, on the other hand, loved it for the same reason that I love shmups.

Take Gradius V, for example. I’ve been playing that game 4-5 times a week for the last two months and I have yet to actually beat it without using the slew of continues the game grants you for logging a great deal of playtime — that’s my goal, to complete the game as the game originally intended me to. It’s an overwhelming challenge and sometimes gets me hurling controllers across the room, but it’s a very compelling experience, trying to best a game like Gradius; refining technique and reflex to a point by which you might pass through an entire stage virtually unharmed. It’s hard, but dying over and over doesn’t make it any less fun.

Nowadays there are virtually no games that are, for the most part, impossible to finish in a single session. Completing a game comes down to how much time you’ve got on hand rather than skill. As much as I love Okami, it serves as a good example as to what I’m speaking about; it’s not a difficult game, and having played more than 30 hours of the game, I’ve yet to die. Not even once. But as I understand it, I’m still another 20-25 hours away from beating Okami — what matters is just how much time I’m willing to commit. In essence, gameplay like this, no matter how beautiful or technically flawless that it might be, has virtually nothing to do with skill. It’s like reading a Dickens novel; all you have to do is put in the time.

Can you name any games on your shelf that you simply cannot beat yet? Though I’m sure we’ve all got our impenetrable fortresses here and there, these games haven’t occured with the frequency that they did in the NES and SNES days. It’s not about skill anymore, and games that require the player to work hard and become good at the game before progressing beyond a certain point are few and far between in the current generation.

Shmups and games like God Hand aren’t interested in holding your hand and gently nudging you forward; if you fail, pick yourself up and try again, and keep trying until you win. There’s something to be said for that, rare though it may be. 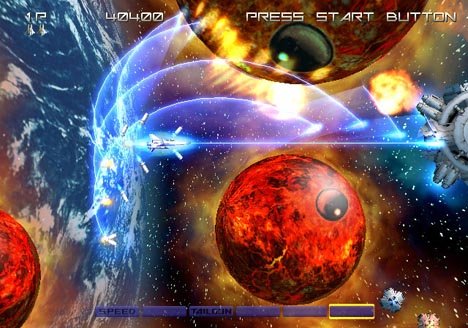 Earlier I mentioned that shmups are based on gameplay that is somehow more pure than other games, and no, I wasn’t high when I wrote that, honest. Here’s my reasoning: gaming, in its infancy, was a pastime built on things like hand-eye coordination, reflexes, and a quick instinct — more to the point, games like Space Invaders, Galaga, and Defender were foundational in building the arcade industry. They are, in a sense, boiled-down gameplay experiences that rival Super Mario Bros. in their simplicity as well as enjoyability.

Where other genres have evolved to meet an expanding and changing market, shmups remain virtually unchanged. They’ve got their gimmicks and power-up systems — hell, some have even incorporated storylines, as silly or underdeveloped as they may be — but the only thing that has been truly ramped up since shmups’ earlier incarnations is the difficulty. To do what the guy playing perfect 2-player games of Ikaruga does takes a lot of practice and an unparalleled degree of focus. In recent years, shmups have become ball-bustingly difficult exercises that show you just how much that you’ve declined in your old age — and by you, I mean me. But it’s not hopeless. With a bit of practice and some daily play, one can recover the edge that they haven’t had since they were 12, when gaming was simpler and victory was determined by skill rather than available time.

I respect gamers who hone their skills in FPS titles and online multiplayer matches, but not in the same way that I respect hardcore shmup players or, in some cases, fighter players. They’ve conquered single-player campaigns that may take weeks for the layperson to complete and understand the mechanics of the game in a way that few of us ever take the time to achieve. It’s about making a complicated, unforgiving and ruthless system of bullets, ships, and obstacles your bitch. Gradius V might never call you a n00b and teabag your corpse mere moments after slaying you with an energy sword, but it never makes mistakes, either. Shmups are crazy hard, and they’ll be crazy hard every time you pick them up. To win, you must exceed your current capabilities and try harder, refining every movement and button-press into an elegant orchestration of mind and body.

It’s a competitive experience, but not in the way that most of us are familiar or perhaps comfortable with. It’s about constantly improving yourself, as opposed to simply being better than some late-night crew on a public server. It’s a solitary but ultimately rewarding experience, and if you’re so desperate to compare your skills to others, you can always post on scoreboards.

There’s a shmup fan in all of us. I had renewed faith in the gaming community when Geometry Wars developed such an intense following, but we seemed to have come to a full stop since its release; copies of R-Type Final go untouched and unplayed, and what few shmups are released in the US are quickly relegated to the bargain bins. Japan has a huge supply of great shmups on hand; we must demand them. We must kill, bite, scrape and scratch for them. We’re missing out on one of the fundamental joys of our trade because nobody’s clamoring for it. I beg of you, Dtoid readers: clamor. Playing a good shmup is like returning to Mecca, even if Mecca chews you up and spits you out — it’s like coming home.

Be hardcore. Play a shmup.