Since Super Street Fighter IV news is being obnoxiously trickled out a drop at a time and nobody wants to read a new post on it every ten minutes, I’ve decided to round up some info and make it part of … whatever this thing I do on Friday is.

After the jump, you’ll find some juicy new details on the game, compiled from several different stops along the interbutts highway. I was going to post more Memebon pictures, but this is just as good, I guess. Follow on as we kick off the weekend with some fresh upda … mmm, Juri …

1. Confirmed game deets!
First up, IGN posted an interview with Yoshinori Ono, and he had some interesting tidbits to share. Here’s a little peek at some of the new stuff we’ll be seeing in SSFIV:

While noting that he was only allowed to say so much, he made it a point to mention a few other things. He says that the existing stages have been tweaked, and that “It’d be strange” if we didn’t get some new ones, but wasn’t permitted to elaborate. He later addressed the topic of the classic bonus stages making a comeback, and said “I’m going to try really really hard this time around.” Again, he’s not allowed to say for sure.

And when reminded that fans have come to expect new moves and attacks with updates like this, he replied, “we certainly have no intentions of betraying that expectation.”

Ono also stated that he wants to expand the use of this engine as much as possible, and the one thing he’d most like to do with it is to build a new Darkstalkers game. I would also like this thing.

2. Character Rumors
The bulletpointed stuff you read above is official. What’s not confirmed yet is the list of remaining characters that EventHubs had listed last week. I’ve linked to this a few times before, but I’m just going to list them here because a lot of people seem to miss it. This is still rumor material, but they’ve been right so far — even about Juri and her backstory before she was revealed. Unannounced fighters rumored to be on the way are:

Nakky says we should hold onto hope, and I’m inclined to agree. You can help by signing the petition under the SRK link above, and/or another one over here. I’m normally the kind of guy who laughs at petitions as an effective means of reaching game publishers, but Capcom is one of the very few companies who actually notices them. In fact, this same kind of petition is almost entirely responsible for Juri’s addition to the franchise. Speaking of …

4. Juri skin for iGoogle
The guys at Google set this up for fans of the sexy new addition to the Street Fighter universe. It’s free, of course, and it changes depending on the time of day, with different pics of the evil Korean spider lady herself. Pretty cool if you use iGoogle. They should make skins like this for everything, so I never have to stop looking at Juri. 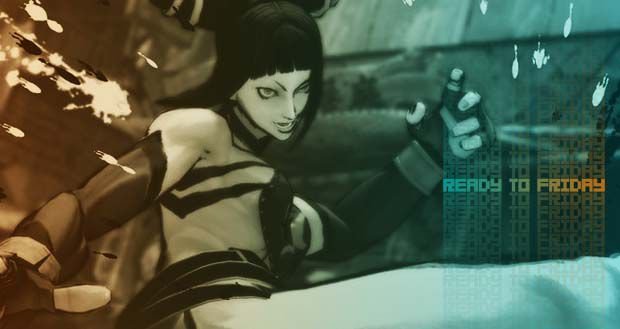 5. I am in love with Juri
It’s true. Those sinister eyes, that seductive voice. That straight, black hair with those sharp Asian bangs … and have you seen this shit? She’s also the only female character in the game so far who doesn’t look like a dude. I’m going to marry her, and we’re going to have evil spider babies together. We will then train these evil spider babies to attack Capcom headquarters and force them to put Dudley and Ibuki in the game. You’ll want to call us and say thanks, but we’ll be too busy making more evil spider babies.

That’s how I’ll be spending my weekend, anyway. What are the rest of you up to? Let’s FRIDAY.