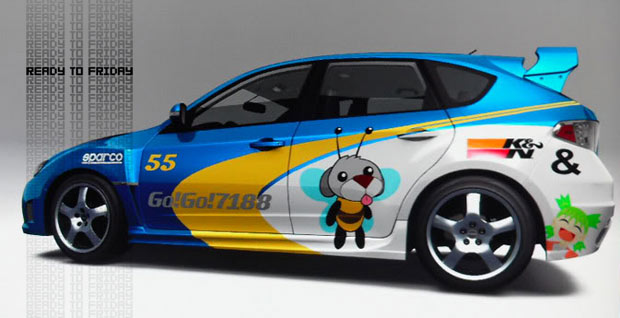 So I’ve been playing Forza 3 this week. I keep trying to NOT play Forza 3, but I can’t. It won’t let me. I keep turning off the Xbox and walking away to do something else, and ten minutes later I’m signing in again. It’s a force, I tell you. It’s sentient. Also, you can make Beedog itasha. There’s another shot of that after the jump.

Dale was right, though. I don’t know if I’d have given it a 10, with its painful load times and sh*tty soundtrack, but the Forza force would probably have made me do it anyway. It’s like an invisible giant squid, which is an analogy that is probably only making sense because I just got out of bed a few minutes ago. But it is. The more I try to fight it, the tighter its grip gets. It’s madness.

My point is, if you’ve got $60 and a 360 and you like racing sims, you should be playing this right now. And if you aren’t? I hate to be the one to tell you, but you, sir, are a dumbass. You may have time to pick it up and play it after tonight, because it’s FRIDAY.

Also, the mighty Adam Dork is about to double down. Hit the jump for the video, the other side of the Beedog car, and a picture of a pretty girl who I posted because I felt like it.

The Lovely Adam Dork. Dressed as Mario. With a handlebar mustache. Doubling down. You’re welcome.