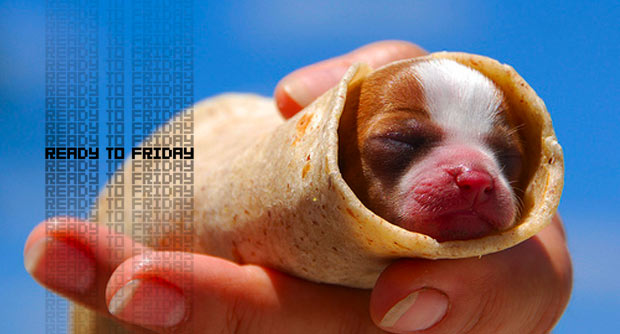 Senor Perrito del Burrito says: We’re all gonna die. I don’t know if you’ve been following news on the Large Hadron Collider, but it was reported yesterday that a couple of physicists actually believe it’s trying to destroy itself. From the future. Word is, this Higgs boson they’ve been hoping to coax forth might be:

“So abhorrent to nature that its creation would ripple backward through time and stop the collider before it could make one, like a time traveller who goes back in time to kill his grandfather.”

Maybe it’s just me, but if you build a device that can create sentient subatomic particles which are capable of travelling back in time to prevent themselves from being discovered, perhaps it’s a good idea to, you know, take the hint. It’s ok, Dr. Freeman. I don’t mind that you wasted six billion dollars. You learned your lesson and nobody’s angry with you. just put down the crowbar and step away.

That way we’ll get to stick around long enough to go out the way nature intended, as part of a widespread zombie apocalypse. The point is, we don’t have much time, kids. You’d better get your FRIDAY on.

In other news, there’s been a recent surge in the number of people who are doubling down. If I may direct your attention toward this forum thread for people who think I’m not such a bad guy after all, a bit of a challenge has been issued. Double down, submit proof that you have done so, and earn yourself a sweet new forum badge. Be it high-speed subatomic particle manipulation or low-speed sammich engineering, you too can contribute to the wonderful world of SCIENCE.