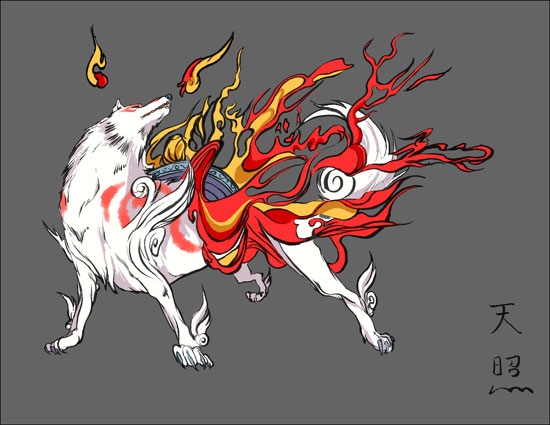 It was inevitable, and the rumors finally were confirmed a few days ago — Okami is indeed coming to the Wii. The beautiful PlayStation 2 title seemed like a perfect fit for Nintendo’s console, with its brush stroke mechanics and its Legend of Zelda Jr. gameplay (which was a good thing).

The Wii version of the title will use motion-controls for physical attacks, as well as using the Wii Remote to paint using lil’ doggie Amaterasu’s “Celestial Brush.” Other than the control scheme, there’s no word if any additional content will make its way to the Wii, but that should be perfectly OK for gamers who haven’t had a chance to play the PS2 version.

But the really interesting part of this story is not that Okami is coming to the Wii; we knew that. Capcom has also confirmed that the game is being ported by Ready at Dawn, a team made up of former Naughty Dogg and Blizzard folks. Best known for their PlayStation Portable title, Daxter, the team should be spending their time focusing on the upcoming God of War: Chains of Olympus. But really, how hard could a PS2 to Wii port be?

SAN MATEO, Calif. — October 17, 2007 — It’s finally time to experience the magic of Okami™ as it was always meant to be played. Capcom’s award winning game — hailed as “Game of the Year”for 2006 by multiple magazines and websites including Associated Press, PSM, Village Voice, IGN.com, Game Revolution and more — is set for release on the Wii™ home video game system in Spring 2008. Featuring a re-imagined control scheme built around the intuitive Wii Remote™, Okami offers players an unparalleled level of control and an opportunity to rediscover a critically-acclaimed and beautifully crafted adventure.

Okami tells the story of a mythical sun god who sets out to restore a dismal world, decimating the forces of evil who stand in the way by commanding the elements and mythical abilities the deity possesses. Mixing Japanese folklore and a stunning traditional Japanese art style, players must utilize an inventive control scheme to overcome the challenges and evil that await. By enhancing the unique gameplay, visual style and story line of Okami with the control of the Wii Remote, it is sure to be the ultimate version of the game.

Originally designed for the PlayStation®2 computer entertainment system and released in 2006, Okami now comes alive in an entirely new way on the Wii with its visually stunning art style and beautiful scenic 3D levels that have the appearance and texture of paper scrolls brushed with watercolor-like calligraphy art. Throughout the vibrant and distinctive surroundings, players must use the Wii remote to interact with a dynamic world and cast of characters. The blend of stylized graphics, movements and unique gameplay will result in a rich and dynamic experience never seen before.

Okami includes the following features:
• Innovative gameplay and control scheme optimized for the Wii – Defeating monsters requires both motion-controlled physical attacks, but also use of the Wii Remote as Amaterasu’s ‘Celestial Brush’ to paint the desired powers for decimating enemies and solving puzzles.
• Create and destroy at will – Play as a god to re-establish order and beauty to a world laid barren by evil.
• Intense action-packed battles – Rooted in Japanese folklore, fight against a diverse line-up of demons and monsters.
• Utilize various gameplay styles – In addition to the Celestial Brush, Amaterasu can wield three types of offensive weaponry, each with their own unique abilities and effects. Depending on how a weapon is equipped, it can be used as the main or sub weapon:
o Reflectors – These well-balanced weapons are suited for close range combat
o Rosaries– Sacred magatama beads are great for quick long range attacks
o Glaives – These can be charged up to unleash powerful close range attacks
• Intriguing main character – Assume the role of the sun god, Amaterasu, who descends upon the earth in the form of a wolf. The Japanese translation of the word wolf is “Okami”.
• Original visuals and revolutionary design– Vibrant and inspiring graphics, reminiscent of traditional Japanese art created on paper scrolls, produce a large variety of stages with a watercolor-esque appearance.
• Interact with a unique and dynamic cast of characters.