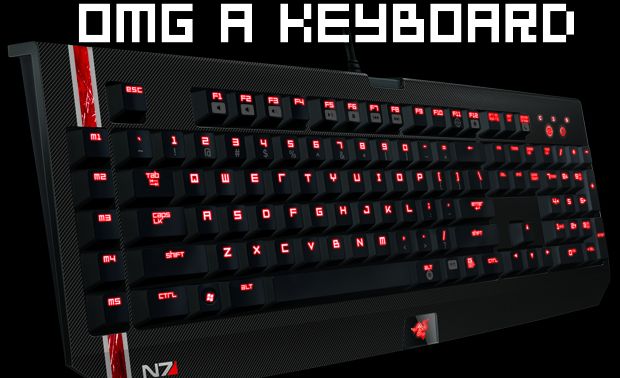 “I’m Commander Shepard and this is my favorite PC manufacture on the Citadel.” Do people still make that joke? I don’t know.

So yeah, Razer and BioWare have teamed up to release a ton of branded Mass Effect 3 accessories, just in time for the March 6 release date. So what’s on offer? Everything! Keyboard, mouse, Xbox 360 controller, messenger bag and even a mouse pad.

The most expensive of the bunch is the Razer Chimaera 5.1 headset, coming in at $209.99. The cheapest of the Mass Effect 3 collection, yet most overpriced, is the iPhone 4 protective case. Despite the price, I oddly really want the case. I am part of the problem.

As for the downloadable content, you’ll be getting a code for a “Collector Assault” Rifle and other multiplayer items. If you already have the Collector Assault Rifle, then the code will just strengthen your gun even further. Note these codes are only good for PC and Xbox 360 players.

You can take a look at the entire Mass Effect 3 Razer lineup over on Razer’s website as everything is up for pre-order right now.