More than just a pun

When the co-founder of Ragtag Studio, Chris Cobb, told me that Ray’s the Dead was Pikmin with zombies, I was just about ready to hand over my wallet. I’m not even a huge fan of Pikmin, but for whatever reason this idea perked my ears up. What if instead of commanding cute little plants to fix a spaceship I was working with zombies to understand why and when I became a zombie? The premise certainly was interesting.

Perhaps the best thing about Ray’s the Dead is its light-hearted humor. These aren’t gritty Walking Dead zombies with entrails hanging out and blood everywhere — the art style is way more cartoony and adorable. For the undead, think less DayZ and more Plants vs. Zombies. The gameplay is indeed reminiscent of Pikmin, but with a lot of mission variety.

Ray is a zombie with a bit of an identity crisis. He doesn’t seem to know why he’s a zombie, and definitely doesn’t know anything about the lightning rod in his head which allows him to raise and control other zombies. The plot wasn’t fleshed out much in the demo, but Mr. Cobb told me that the game would have playable flashbacks that would help restore Ray’s memory of his former self. These flashbacks will use the same Pikmin-esque mechanics in interesting and contextualized ways.

Ray can raise other zombies from the ground in certain locations, or can raise any recently killed human. Zombies can be aimed to go in any direction, and be sent outdone at a time with a button press. They can be recalled at any time, and eventually you can cycle through which type of zombie to send out. Some objects around the map will require a certain number of zombies to break down in order to progress, but finding more zombies never seemed too difficult. 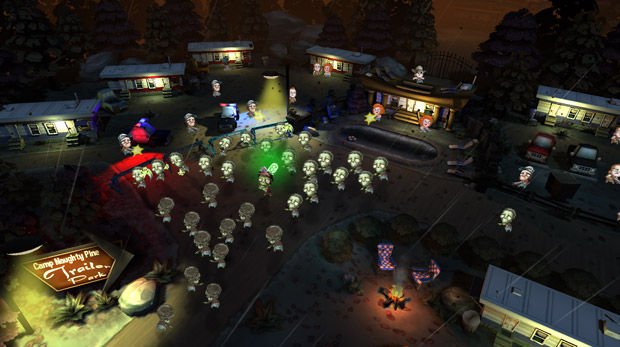 The game seems to know the importance of mission variety considering the second level had me avoiding killing humans, since it was Halloween and everyone thought my horde of zombies and I simply had great costumes. This level also had me avoid getting too close to police dogs since their sense of smell would uncover the truth. This segment played a bit like a stealth game as I maneuvered my zombies around the scent radii of the dogs.

Zombies can also be sent into bushes in order to pull humans in without causing a commotion as not to draw attention to the death in certain areas. The second type of zombie was a dog zombie which was faster than normal zombies. When confronted with enemies with guns, sending in the zombie dogs first will stun them and allow the slower zombies to approach. There’s a semblance of strategy apparent, though it’s hard to tell how much deeper it can go. Ray’s the Dead is on Steam Greenlight now and should be out this year.