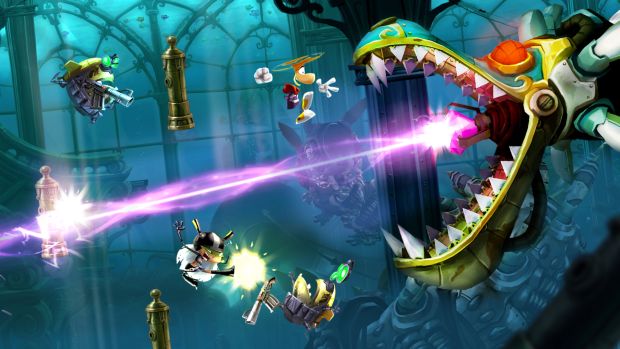 There aren’t many games out there where you just know you’re going to buy it after the second you see it in action. Rayman Legends is one such game, and I’ve played it on every platform it’s coming out for now. Xbox 360, PlayStation 3, Wii U, and yes, even the PlayStation Vita version which was just announced.

The demos I played were all based on underwater levels like the one you see in the video above. The stealth aspect was pretty neat, as you can’t just go running through it without a care in the world like other levels. Then I got to play musical Mariachi Madness stage that was a lot of fun, but super difficult to master.

My hands-on time wrapped up by fighting this giant crazy robotic dragon that’s going to require a lot of communication with your friends if you find yourself playing through it cooperatively. Communication in the form of “stop f*cking up and do what I say goddammit!” Trust me, it’s fun.

Rayman is largely the same on each platform with some minor differences here and there. The important thing is that they all have wonderful visuals, the gameplay is solid, and the entire concept is so damn charming. Really, it’s a no-brainer picking up Rayman Legends when it’s released on September 3 in the US and on August 30 in Europe.