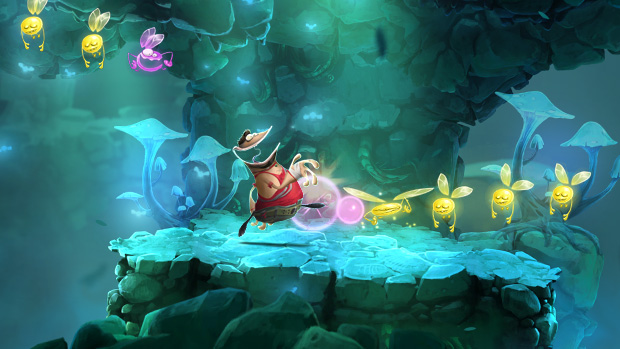 The previously-announced Xbox One and PlayStation 4 editions of Rayman Legends have been dated for February 25, 2014. Ubisoft has also given specifics about what’s new. For Xbox, there’s the Splinter Ray, Ray Vaas, and Globox Vaas costumes, plus 10 exclusive challenges to unlock “time-limited Achievements.” For PS4, the TouchPad can be used to scratch those darned Lucky Tickets, and the new costume is Assassin Ray.

More importantly, load times have been reduced. These can be fairly lengthy in the current-gen versions, so that’s great to hear. I was late to picking up Rayman Legends, but it’s quickly become one of my favorites this year. I’m talking top three, easily. That underwater stealth world — which sounds like the worst thing ever, but is quite the opposite, somehow — blew me away.

If you’ve yet to play the demo and would like to do so quickly, Ubisoft has a streamable in-browser demo that supports Xbox 360 controllers and mouse/keyboard. How fancy! I wasn’t even going to acknowledge it, but what’s the effing deal with Snoop Lion in this video? Huh?