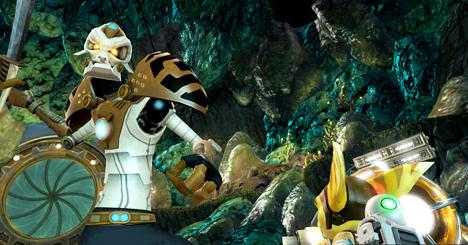 The number one number two reason to pick up a PS3 this year (recently updated since the extremely cool PlayStation Home news hit earlier today), Ratchet & Clank Future: Tools of Destruction, has a first screen shot and it is … well … a’ight.

Not that it looks bad by any means, there are just such high expectations for this game, as the Ratchet & Clank series is one the best video game series out there.

Perhaps it is the low polygon design of the skeleton character or the close angle everything is being viewed at, but, for whatever reason, this screen shot just looks like a high resolution, cleaned up shot from one of the older PlayStation 2 Ratchet games (where is my gloriously detailed, high-def lombax fur, Insomniac?).

There are rumors that this game looks nothing short of stunning, so judging things by this strange screen shot is proabably not the right thing to do. I mean, take another look at those rocks in the background. Very nice, right? The final product will most likely look great and make all of us Ratchet & Clank fans more than happy.

Check out the gallery for some gorgeous backdrop art and hit the jump for some information about the actual gameplay (space combat, story details, etc.).

One of the fellas at 1up had this to say about a pretty robust demo:

The game engine: This is all tech that developer Insomniac created themselves (which they adapted/refined from working on Resistance).

The frame rate: In the demo we saw, the game ran at 45 frames per second (most next-gen games are still only doing 30), but Insomniac is shooting for the super-smooth 60. I suspect they’ll make it since the game isn’t due until this fall (the fact that Tools of Destruction is already running at 45 is pretty damn impressive).

The space combat: Tools of Destruction will see the return of space combat, which felt very much like a Star Fox level. You’re on rails, yet the backdrops were pretty damn amazing, as one section had Ratchet navigating through this enormous asteroid field (think Star Wars Episode II) while dodging enemy fire. I suspect you’ll encounter this type of gameplay whenever you travel from planet to planet.

Ratchet’s love interest: Well, maybe he has one. See, along the way Ratchet and Clank team up with a female lombax named Talwyn who’s searching for her papa.

What do you think? Excited? Or are you holding back until you see/hear more?