Plus, more classic Ratchet heads to PS Plus Premium

Insomniac Games and Sony are celebrating the 20th anniversary of the Ratchet & Clank franchise. Some throwback armor is headed to Ratchet & Clank: Rift Apart, and some classic Ratchet is going on PlayStation Plus Premium.

The Ratchet & Clank series kicked off in 2002, with the very first game for PlayStation 2. Since then, there have been quite a few entries in the duo’s adventures.

For the most recent, Rift Apart, Insomniac is releasing several sets of armor, free for all players. They arrive in a pack today. Here’s the full list: 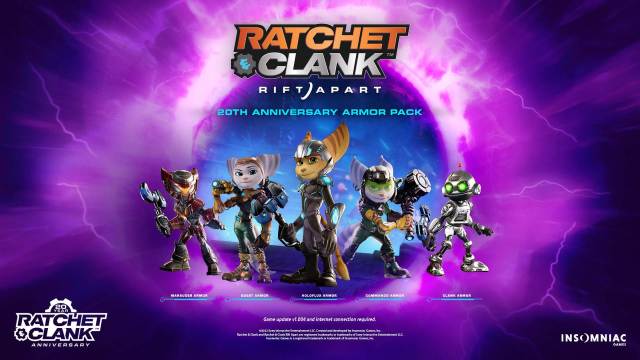 Ratcheting up the nostalgia

There are some classic Ratchet & Clank games arriving soon for PlayStation Plus Premium subscribers, too.

Several games, like Into the Nexus and Quest for Booty, are already on Premium’s game catalog. But on November 15, several more classic Ratchet & Clank titles will hit the service. These are some classic titles, going back to the PS2 era of

Today’s PlayStation blog announcing the news also dug deep into the history vaults. There are a ton of quotes and tidbits from throughout the years, discussing the history of one of Sony’s most prominent faces. It’s a cool way to explore the history and legacy of Ratchet & Clank, two decades on.