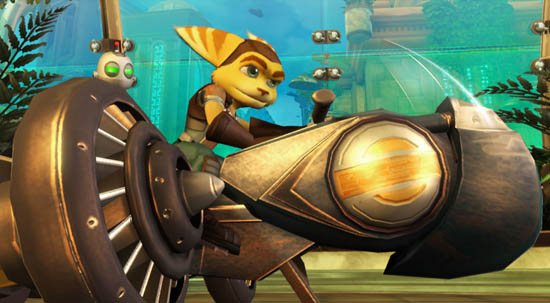 Perhaps you’ve read our review on Ratchet and Clank Future: Tools of Destruction and were wondering if you could connect this game to other titles. Okay, so maybe not, but you might be interested to know that it does support some kind of connectivity to the upcoming PSP game Secret Agent Clank.

1UP tells us about an interview with Insomniac’s Creative Director Brian Allgeier that revealed that the newly released PS3 game does in fact connect to Secret Agent Clank in “some secret, undisclosed way.”

The same interview tells us that Ratchet and Clank: ToD will not “connect” to Sony’s social networking app Home, and that we shouldn’t expect any interactivity with Insomniac’s other PS3 title. Resistance: Fall of Man.

“We wouldn’t want a Mature game and an [Everyone 10+] game talking to each other,” said Allgeier.

Filed under... #Insomniac Games#PSP#Ratchet and Clank