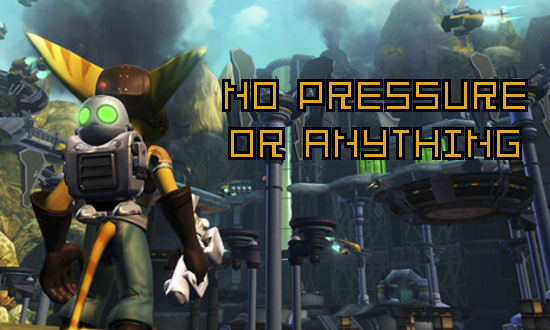 There’s no denying that Sony could really do with a hit in the near future, and there are few better franchises to tackle the Xbox 360 and Wii this Christmas than Ratchet & Clank. Recognizing this, Sony is reported to be pumping $1million into the promotion of Insomniac’s platform shooter.

The huge bags with dollar signs printed on them have won Sony prime time Saturday night TV spots, ensuring that knowledge of the game will reach the masses. As the holiday season draws near, it’s clear what horse Sony is going to back, and it’s a very good choice. Not only is Ratchet & Clank Future: Tools of Destruction bright and colorful enough to appeal to kids, the humor, gorgeous visuals and solid gameplay is something that adults can get behind as well.

The ad campaign will last for a month beginning November 16th. It will accompany a big online campaign featuring coverage on some of the biggest Web sites, both specialist and mainstream. Sony states it is looking at the game as a “benchmark” PS3 title.

Will Ratchet & Clank prove to be the secret weapon that Sony has long needed, or is the faltering company throwing good money after bad? Future: Tools of Destruction has the potential to be the biggest PS3 title to date, but it doesn’t have much competition. Exactly how big the new Ratchet & Clank will be remains to be seen. Do you think the push will pay off?

Filed under... #Ratchet and Clank