Battletoads is an interesting entity. It’s really hard, and everyone knows it. It garnered a big following long after its release and has become more and more infamous over time. Then, the characters appeared in Shovel Knight, which was crazy and very well done. Now, Rash is appearing in Killer Instinct. Even Rash knows whats up, since his victory screen breaks the fourth wall and has him saying “These cameos are killing me!” before he speeds off on his speeder bike.

Luckily, just like the Battletoads appearance in Shovel Knight, this one is done with great attention to detail and the special ingredient that makes everything better: love. 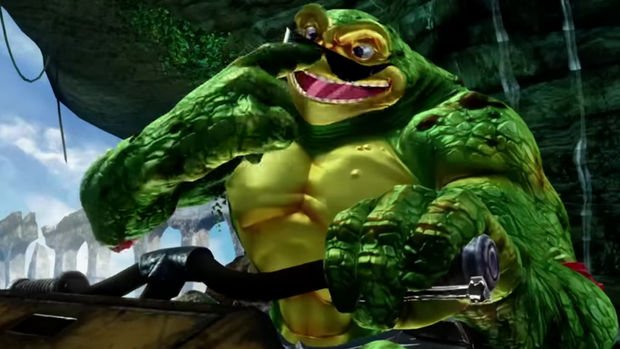 Rash plays like he’s ripped right out of Battletoads. He can grow ram horns and headbutt his opponent, turn into a wrecking ball, kick with a giant spiky boot, and even call in the infamous speeder bike. While these sounds completely ridiculous, it never feels out of place or strange. I mean, this is a game with robo-dinosaurs and flame cats.

My favorite moment so far has been against an Orchid. We were both very low on health, so she starts spamming her fire cats across the stage. Since Rash doesn’t have a projectile, I just decided to keep eating hers. Eventually she ran out of Instinct and I was able to use the Shadow version of the Wrecking Ball to seal my victory!

The animations and sound prove that this isn’t just some ham-fisted nostalgia-fueled cameo done for the money. It’s clear that a lot of care was taken when re-creating Rash for the modern era. Going back and forth between Rare Replay‘s Battletoads and Killer Instinct‘s Rash is way too seamless. Players can even button mash while fighting to perform a combo, though this isn’t super useful.

What needs to change before he’s finished:

The biggest thing that irks me about Rash is that he only has one linker move, Battering Ram. Every other character has more than that and I expect Rash to by March as well. Rash’s trailer seems to have a second linker in the form of a traditional Russian dance, so perhaps we’ll see that come March.

Other pieces are missing as well, like an actual Ultra, but that’s a given for his final version. His throw demonstrated in the reveal trailer has Rash picking up the enemy and moving with them, just like in the original Battletoads, but this is not implemented in the current version.

Rash feels like a great addition to the Killer Instinct cast. If this is how all future cameos are done, then I am all for adding in more. I have a feeling I’m going to go through some intense withdrawal between September and Match without having Rash on the roster.