At a pre-gamescom press event today, Microsft and Rare showed off the Champion Creation System for upcoming game Kinect Sports Rivals. Through this, the Kinect Sensor of the Xbox One captures your face and body and makes a one-of-a-kind champion to be used in the game.

Rare has created tech that sees your your face, body, hair, skin tone, and everything else, and then spits out a virtual character.

Starting out, standing in front of the Kinect Sensor has it reading your body shape. Waves of pixel-y blocks shimmer over your digital form as you move your arms and legs to help it read you. It looks pretty cool, and seems to imply that some fancy computations are going on under the hood.

From there, users will wave your arm one way or the other to determine gender. Apparently it can’t see that.

Stepping in allows the sensor to better see faces. It takes its sweet time in reading every contour of faces, but entertains with a neat blockface model while doing so. The system promtps for front and side poses, and then gets more specific, asking for more subtle head turns. A fair bit of posing and holding is involved before it spits out a character. 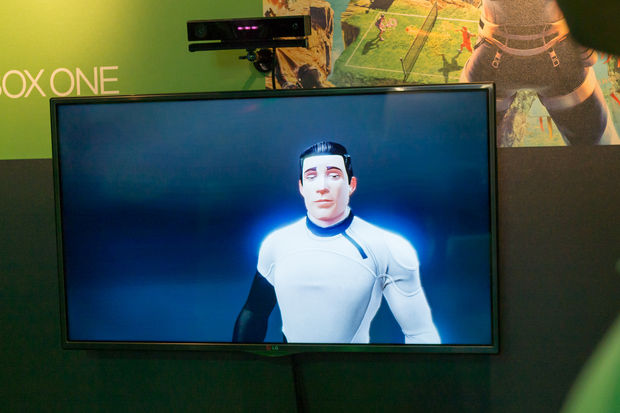 From here, users can tweak things like chin size or hair color. I saw the Champion Creation System in action several times, and while it was mostly accurate, I saw a black man come out as a lanky white guy with slicked back hair. The software absolutely nailed his face shape, and the eyes were close, but the hair and skin color were so far off that some giggled. But, with a few tweaks, the end result was pretty good.

Rare feels good enough about how these Champions are turning out that they’re making t-shirts with players’ faces on them.

I’m up to get mine next.