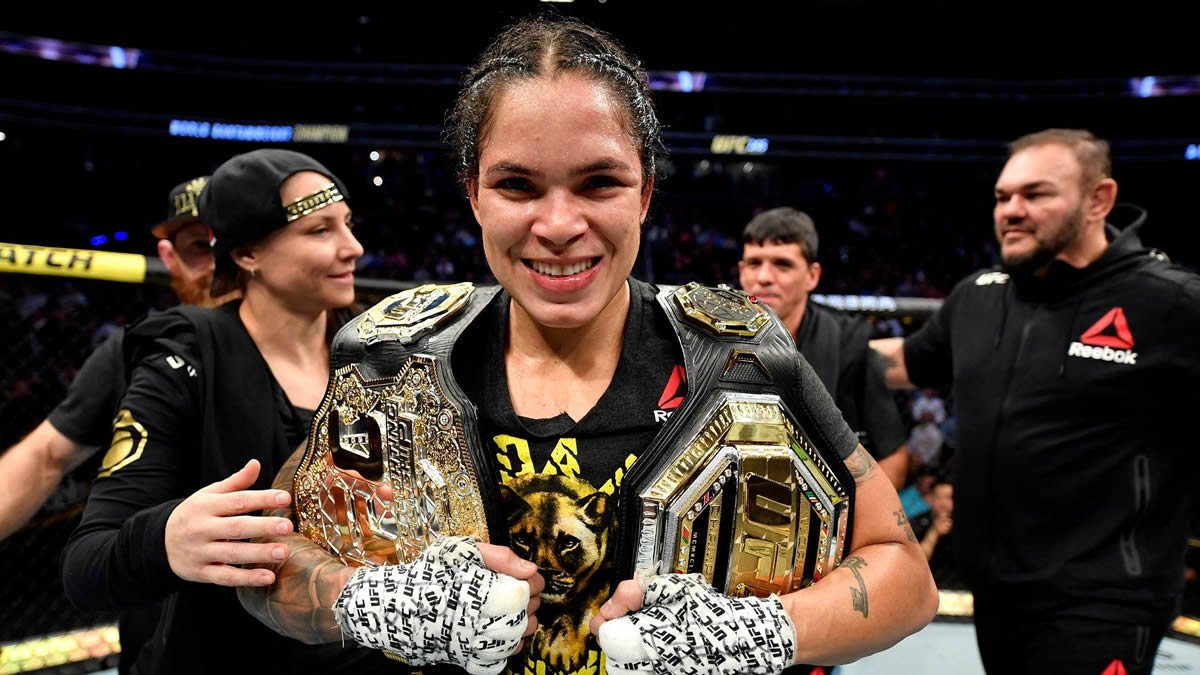 Yesterday’s EA Play Live event came and went without the expected reveal of EA Sports UFC 4. Some promotional materials for July 11’s UFC 251 at Fight Island (which has a monster card, by the way) casually mention that a game announcement will happen during the Pay-Per-View. Waiting a little longer isn’t too much hassle considering we already know what we’re waiting for.

I used this space three years ago to argue that Joanna Jedrzejczyk should be on the cover of EA Sports UFC 3. That argument aged very poorly as she lost for the first time ever mere days later. Since then, she has lost three more times to some of the best names in women’s MMA. She will not be on the cover of EA Sports UFC 4 unless there’s a Mars Attacks edition. Still, Joanna’s my favorite fighter and you can’t take that away from me.

So, who will be on the cover? It’s tough to say because while the UFC has only grown in popularity in recent years, it no longer has a transcendent star like Ronda Rousey or Conor McGregor. (Conor “retired” again a few weeks ago.) There are many options but few clear-cut locks. Let’s rank them.

He very well might be the greatest mixed martial artist of all-time but his outside-the-cage track record has been less than stellar. He’s fresh off a DUI conviction where he went joyriding while firing a handgun in the air, but that’s hardly the extent of Jones’ problematic history. He’s also got that hit-and-run against a pregnant woman, another DUI, a suspension related to cocaine use, and two more suspensions for using banned substances that most fans suspect were masking agents for anabolic steroids.

Seeing him on the cover of EA Sports UFC 4 will have people questioning their vision, like they were just on the wrong end of a Jon Jones eye poke.

Justin Gaethje is a world-class wrestler who has exactly [checks notes] zero takedown attempts in the UFC. He doesn’t play to his most obvious strength because he loves punching dudes in the head. And it works because the throws absolute bombs.

He just got a signature win over Tony Ferguson in May, setting him up for a crack at Khabib Nurmagomedov’s Lightweight belt. Gaethje isn’t yet big enough for a video game cover, but don’t be surprised if he gets there very soon.

There’s probably not a more underappreciated fighter on this list than Valentina Shevchenko. She only has two losses in the UFC, both decisions dropped to Amanda Nunes. She hasn’t lost since 2017. She rolls through the Flyweight division and it doesn’t seem like anyone is going to legitimately challenge her anytime soon. Yet, she doesn’t stand much chance of being our cover athlete.

If Gaethje and Shevchenko are substance over style, Jorge Masvidal is the exact opposite. Gamebred has a career that’s peppered with losses until a three-fight redemption arc has rocketed him toward the top of the public’s interest. It started with a win over Darren Till but, more specifically, an after-fight backstage bonus scrap where he got into it with Leon Edwards and gave him “the three piece and a soda.” The legend grew with his ridiculous 5-second knockout of Ben Askren.

Of everyone on this list, Masvidal is the only one to never hold UFC gold, not even an interim belt. No, the BMF belt doesn’t count.

The Nigerian Nightmare has stormed through the Welterweight division, knocking off longtime champ Tyron Woodley in 2019. Also, he’s headlining the card where EA Sports UFC 4 is going to be announced.

Honestly, just give him the cover for shutting up that phony MAGA idiot.

Khabib is probably the toughest to parse when it comes to this list. He also can lay a rightful claim to best MMA fighter ever. He’s undefeated and might very well stay that way forever.

Yet, he’s not all that exciting from a marketing perspective. He lets his opponents do 98 percent of the trash talking to hype up a fight. Then he gets in the cage and chokes them out. Besides, something tells me Khabib wouldn’t want to be on the cover anyway — but maybe I’m wrong!

Yes, I know that perhaps Stipe Miocic is a better pick here because he just beat Daniel Cormier for the Heavyweight championship. Yes, I know that Cormier will forever have the Jon Jones losses hanging over his career like Pig-Pen’s dirt cloud in Peanuts.

Something tells me Cormier is a very real contender, though. He’s in the twilight of his career and UFC president Dana White has made comments about doing right by Cormier as he nears retirement. He’s getting a rubber match with Stipe in August. He already has a cushy announcer position when he’s not fighting. There’s a chance he might be on the cover of the next UFC game too.

Forget what I said earlier, there’s a very real chance Conor’s on the cover of EA Sports UFC 4 because selling video games is what’s most important. It’s likely enough that he leapfrogs all those fighters who are, you know, still fighting.

Not long ago, Israel Adesanya was an up-and-comer but now he’s up-and-here. The current Middleweight champion is one of the most exciting fighters on the UFC roster. He’s patient, relying on dodges and counter-strikes. He feints a lot, finding weird angles to throw jabs. And, he will kick the absolute shit out of your legs.

Also though, Adesanya is one of the most charismatic on the roster. He’s the rare mixed martial artist who has a personality, and isn’t a forced smacktalker who comes off as cringey. There’s crossover appeal too because Adesanya is a huge anime nerd. He’s done a walkout performance based on Naruto. He mimics writing his victims’ names in a notebook a la Death Note. His nickname is “The Last Stylebender,” an homage to Avatar: The Last Airbender. Yeah, Izzy feels nearly perfect for the cover.

Izzy feels nearly perfect for the cover because there’s only one actually-perfect choice. It’s Amanda Nunes. She is the greatest women’s fighter of all-time. She currently holds the belt in two different divisions. Every time she fights, the only real takeaway is “Damn, Nunes really is that much better than everyone else.”

Here’s a recent example: Nunes just defended the Featherweight belt two weeks ago against Felicia Spencer. Midway through the fight, the discourse was entirely “Wow, Spencer is tough as hell because she’s taking a real beating,” and “Corners need to be better about throwing in the towel to protect their fighters.”