While we wait for SimCity to connect …

I’m a bit of a mess, to be honest. A disheveled, disorganized, forgetful mess. Yet somehow, this all evaporates when I fire up a city builder. Obsessive? Definitely. Compulsive? Without a doubt. Everything needs to be just so, and if it isn’t, well woe be anyone that stands in the way of my bulldozer.

When it was first revealed, I squealed in delight at the prospect of playing a new iteration of the beloved SimCity franchise, and at first, SimCity seemed to be just what I wanted. The more information that came out about it, however, the less interested I became. The always online nonsense, the miniscule size of these, let’s face it, towns, and the focus on the micro scale — it just didn’t appeal to me. I couldn’t care less about the names of my Sims, I just care about their utopia or, when I’m feeling moody, their dystopia.

If you’re like me and have lost interest in SimCity, or you’re just one of the many people who can’t get into the game right now, I can offer a few alternatives. Not just alternatives, as it happens, these are my favorite city builders. There was some discussion amongst the Destructoid staff about what constitutes a city builder, but for the purposes of this piece, I’m taking it literally. No 4X titles, no “Theme” games, just the construction of cities, and one space station, because I’m inconsistent. 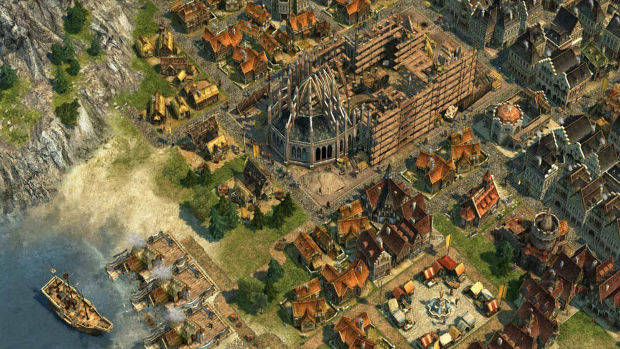 I knew I wanted to put one of the Anno series up here, but for the life of me I wasn’t sure which one to pick. I have many fond memories of being a muddled young man, trying to build a profitable city and run a complex trade network, but I think it was with 2009’s Dawn of Discovery, as it’s known in the US, where the series really hit its stride.

It retained a great deal of complexity, but moved along at a surprisingly lackadaisical pace, never getting quite as frantic or stressful as some of its peers. The generally sunny setting, the beautiful water, and rather sumptuous graphics all added to its overall pleasant feel.

Of course, it wasn’t all taking it easy and admiring the pretty topography and renaissance architecture. There were island fiefs to run, ports to maintain, and citizens to keep happy. Status played a large role, as it so often does in these games, and as you provided more resources and goods for your citizens, they would move up the social ladder, demanding even more from you and giving you the impetus to expand your trade and settlement.

Unfortunately, some rather uninspired ship combat was also shoved in, and no thought needed to be given to tactics. It’s just about building more ships. Numbers are everything.

I should note that I recently just picked up Anno 2070, and I’m having a bloody good time, but I’ve yet to play enough for it to knock Dawn of Discovery off the list. 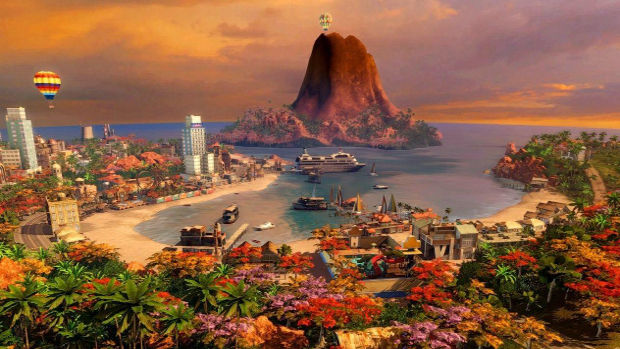 It’s good to be a dictator, especially in a sun-soaked banana republic. I’m a big fan of all the Tropico games, even the pirate spin-off, though the fourth iteration represents the best of the franchise. Honestly, not much has changed since the original, with every game just improving on the mechanics and features incrementally — but damn are they fun.

The construction of the city itself isn’t the high point, it’s maintaining it that I always found to be delightful. It might seem like an easy job, having absolute power, but citizens are likely to get all up in arms if you treat them as terribly as you may want. They’ll bugger off into the jungle and strike just when you least expect it. With guns! The bloody cheek.

So, more often than not, Tropico becomes a juggling act, trying to keep the factions which represent the interests of your population happy. Build a church for the religious faction, make friends with the USA to keep the capitalists rolling in it, stop pumping toxic chemicals into the air and you’ll find that the environmentalists are happier with your rule — it’s all me, me, me from these blighters.

Of course, doing something for one faction might upset another, so it can actually become reasonably complex, certainly more so than first impressions suggest, as you’re lounging in your presidential hammock. It’s a good thing there are all those edicts which help you to enforce your will on the people, and lets not forget the dictator’s best friend: propaganda.

It’s also got some cutting satire underneath the colorful veneer, and amid the clamouring for elections, secret police, and military propaganda blasting over the airwaves, you do start to wonder if maybe you’re a terrible person. 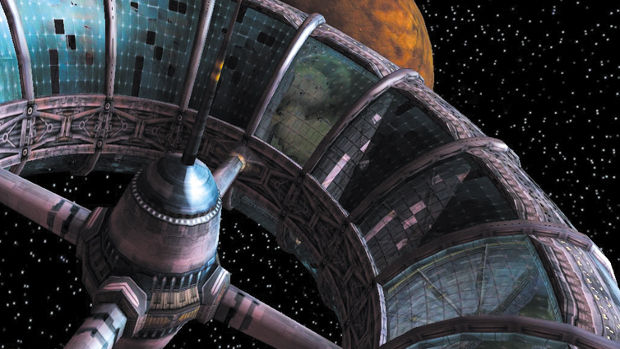 I know, I know. I’ve got a cheek not including things like Theme Hospital when I’m bringing up Startopia, but what is a space station if not a city in space? Certainly, in Startopia that’s exactly what it is, and it’s bloody marvelous. With the character and comedy of Hitchhiker’s Guide to the Galaxy, tons of rather silly alien races, and lots of splendid construction and management, how could I not mention it?

Startopia puts you in charge of a commercial space station, or series of them, which cater to the various needs of hordes of grubby aliens. Hospitals must be built in case your visitors get ill, quarters have to be constructed because even aliens sleep, garbage has to be recycled, and an entire floor of pleasure and leisure facilities need to be maintained.

Most rooms can be upgraded with different equipment to expand the quality of your service, while aliens can be employed to man them. Each resident and visitor has their own mini-bio, and they aren’t all necessarily good workers. If you hire a crap doctor, patients will die.

For greenthumbs, there’s also a biodeck to fiddle around with. Terrain can be morphed, moisture levels can be altered, and a variety of flora can be grown, harvested, and then sold. It’s also a great place for the hippie aliens (yep, that’s a thing) to chill. 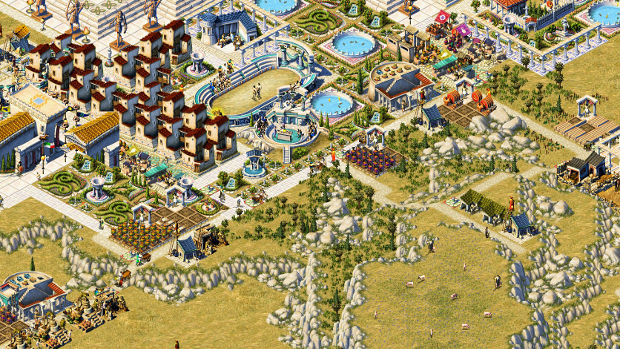 This was another challenge to pick, despite being absolutely amazing. Zeus is part of the trinity of Impressions’ best city builders, the others being Caesar III and Pharaoh, and damn was it tough to choose between them. Honestly, you can’t go wrong grabbing any of them, even now, but the one that entertained me the most had to be Zeus.

As I tend to enjoy a good challenge, Zeus may not seem like it would sit on my number two spot. It’s a lot more easy going than both Caesar III and Pharaoh, and it’s pretty easy to keep your city ticking. But rather than seeing it as the easier sibling, I consider Zeus to be the product of a lot of fixes and the removal of a hell of a lot of tedium. It’s better paced, less fiddly, and simply more fun than its predecessors.

It retains everything that made the others so compelling, as well. Grand monuments that take time and logistical planning to construct, the organic flow of the city as everything and everyone is tied together, from lowly farmers to the most wealthy of nobles, and a complex flow of resources and trade.

I confess to some bias, as I do adore the Ancient Greeks, and even a tongue in cheek caricature of them floats my proverbial boat. Seeing the deities and heroes walking around the city, or going off to get in some scrap always brought a smile to my face. You go, Jason. Steal a woman from her home and drive her insane until she murders your children. Okay, so maybe Impressions didn’t quite capture everything, but it’s tongue in cheek; a comedy not a tragedy. 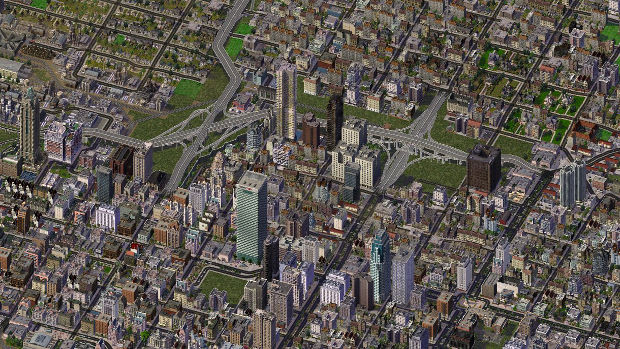 Come on, you knew it was going to at least be a SimCity. This was, for some time, a toss up between SimCity 2000 and SimCity 4, but the last one won marginally thanks Rush Hour and introducing regions in a way that didn’t make me want to punch a baby — take note, EA.

It can be an unforgiving bastard of a game, and so damn easy to ruin your city, but it sucked up years of my life. I built cities on top of volcanoes, tried to recreate my home town, and had vendettas against annoying sims I imported from The Sims — a feature that, in hindsight, was a bit shit.

I think SimCity 4 is my greatest building sim love because it’s the one where I started to actually try to be a better city manager/planner/mayor or what have you. Previous SimCity titles were chaotic messes when I was in charge, even if they were still messes I loved every minute of.

In the end, SimCity has always been about the same things, however, and whether it’s 4 or any of the others, there’s simply so much to do. Planning out even the roads, water pipes, and power feels like a game in itself, but that level of control over my city is what made the experience so compelling. The additional complexity of zoning, density and wide array of services that need to be provided could become a bit overwhelming, but that never stopped me from sitting in front of my PC and playing it until dawn.