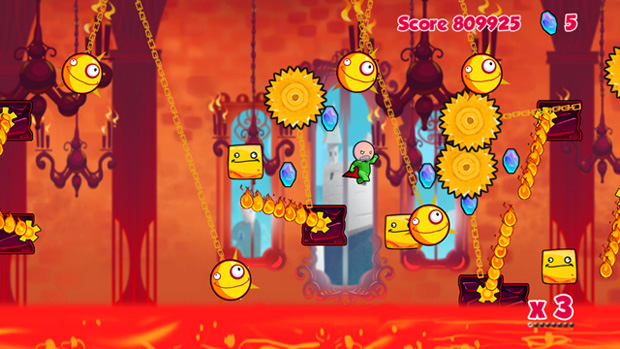 Push it to the limit, walk along the razor’s edge

Other platformers have gone the random generation route, but not to the extent that Cloudberry Kingdom has. In fact, it’s taken developer Pwnee Studios over four years to perfect the engine and game logic. After seeing it in action, I can tell you that it was time well spent.

Thanks to the robust customization tools, a level can be a simple stroll through the tulips or a cutthroat race through the lowest circles of hell. At its most challenging, Cloudberry Kingdom makes Super Meat Boy and even I Wanna Be the Guy look like chumps. But with up to four players vying for the goal door all at once, the toughest challenges can still be a blast.

In the game’s story mode, you hop through level after level of procedurally generated obstacles. Stages are super short — roughly 20 to 30 seconds long if you can make it to the end without stopping or dying — so even if you fail, you’ll never feel like you’ve lost an inordinate amount of progress. Some levels even have checkpoints, reducing frustration even further.

You’ll want to keep your cool, because the challenge only gets worse.

Every few levels, the rules will change. For one set of levels, you’ll have a double jump ability. For the next set, you’ll have a jet pack that operates a lot like the Rush Jet adapter in Mega Man 6. And if you’re playing co-op, you might find you and your friends chained together by a bungee cord, Knuckles’ Chaotix style. For that latter one, players who die become dead weight for the others, which can make completing the level impossible if you are unable to jump high enough.

The free play mode is the meat and potatoes. Here, you can customize the kinds of levels you and your companions will tackle by adjusting sliders for every hazard. Do you want a moderate amount of lasers? Move that slider to the middle. You want no spikes? Slide that puppy all the way to the left. You want flames to rain down like a tropical storm? Crank the sucker to the max. Meanwhile, you can set unique play rules, like forcing all players to ride atop pogo unicorns while tethered together.

In a group of four, it’s total madness. Everyone is hollering as one by one they tumble to their deaths. Definitely a game you’d pull out at gatherings to get some laughs.

So what happens if you move all the sliders to their max setting? Satan’s rave party, a solid blanket of death from which no one can escape. I have seen some ridiculous level designs in my day, but this puts them all to shame and then some.

But what’s the point if no one can beat it? Here’s the secret: every level can be beaten.

Pwnee spent years making sure that even the most seemingly impossible stages are beatable, and to prove it, the game has its own “Super Guide” like in New Super Mario Bros. An AI-controlled avatar will run through the gaps in the level’s defenses with ease, then you can play alongside a shadow of the avatar’s run, trying to match its performance realtime.

Obviously, there will be leaderboards to flaunt your skill to the world, and Pwnee is also hoping to implement video sharing for those skeptics who need a little extra proof of your godhood.

The whole system would collapse if every detail wasn’t in fine working order, but it looks like Pwnee has got the science down like a boss. That leaves the team to drizzle a little extra icing on the Cloudberry Kingdom pie, such as cutscenes animated by the same studio that did Halo 2‘s cinematics — WHAAAAAAAAT!? — and even voice acting from the likes of Kevin Sorbo of Hercules: The Legendary Journeys fame.

If you think you’ve got the grapes, grab Cloudberry Kingdom later this summer on Wii U, PS3, Vita, XBLA, PC, or Mac.