You may or may not know that I am red-green colorblind. Money looks grey to me, pink looks white, brown looks green. No big thing. Since I was born colorblind, I have no frame of reference for how the world is “supposed” to look and, therefore, I’m not constantly in a state of misery and woe over the fact that I can’t differentiate maroon from purple. If anything, colorblindness works as a great ice breaker at parties.

But what of how it relates to my favorite pastime, videogames? How does my lack of rods and cones affect how I do what I do for a quasi-living? Which games can’t I play? Which developers have I come to respect? What am I missing out on, and what do you take for granted?

Hit the jump and thank God you can read this.

Stuff I can’t do

You know Rockstar Games presents Table Tennis? Is that game any good? Because I wouldn’t know.

Table Tennis relies very heavily on the player’s ability to see the color of the ping pong ball’s trail. If the ball leaves a green streak in the air, it’s got forward spin. If it’s got a yellow streak, it’s got backspin. That’s what it seems like to you, anyway: to me, there is only the blue streak and then three other ball trails of identical color which I cannot, in my wildest dreams, hope to differentiate between. There are very subtle visual cues to differentiate forward spin from backspin, but they don’t give the player the immediate visual feedback a simple color does.

When I tried to play Table Tennis the first time, I immediately noticed the color-based spin system and, despite my best attempts (in this context, “best attempts” means “continually hitting the downspin button and cursing violently when my shot doesn’t work the way I want it to”), I got my ass handed to me by my non-mutated friends. 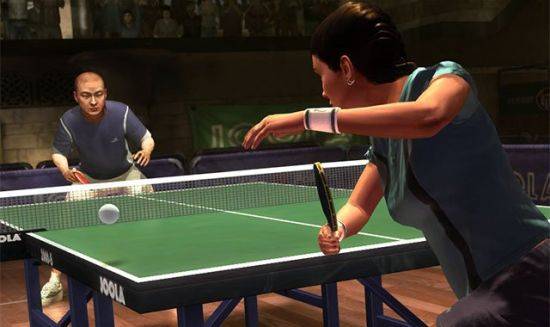 I flailed about pathetically for about half an hour before abdicating completely to Rockstar’s will. There was simply no way to play the game on higher difficulty levels, or against other people, without subliminally and instinctively reacting to the color scheme.

Thankfully, Table Tennis is the only game I can currently think of which I absolutely cannot play under any circumstances; still, I am aware of some stuff I’m missing in other games due to my oh-so-unimpressive affliction.

I didn’t know that the Big Daddies in BioShock changed the color of their eyes based on how pissed off they are at the player. A few days after BioShock came out, someone posted this in the cblogs and I just plain didn’t get the joke. Put yourself in my shoes: imagine how weird this comic would seem if, instead of the traffic light gag which is currently there, the Big Daddy’s eyes stayed the same color all throughout the comic. Panel one: he stands there. Panel two: he stands there. Panel three: he punches a car for no reason. Everyone in the picture’s comments is laughing their asses off at something you just don’t get. It’s weird.

But I’m whining, and nobody likes a whiner. Colorblindness isn’t really that bad; I just wanted to point out some little odd things that I have slight trouble with that you might otherwise take for granted. Let’s take a look at the positive now, shall we?

Stuff I can do 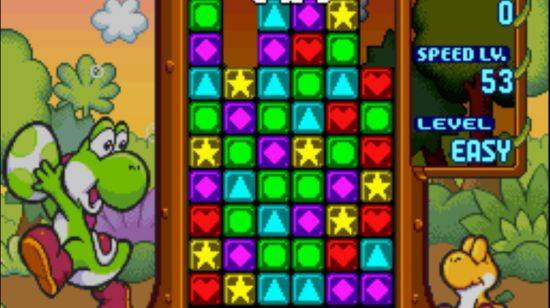 In my Rez HD review, a few commenters expressed irritation over the fact that a colorblind guy would review a game based completely around the concept of synaesthesia. This is a reasonable complaint, but those readers need not have worried — even in funky graphics-centric games like Rez, I can almost always discern what is going on and what to do.

This doesn’t mean I can play Space Giraffe with any degree of efficiency (though I go back and forth on whether my SG suckitude is a result of my own eyesight or the game’s too-confusing visuals, or a combination fo the two), but my respectability as a reviewer need not be diminished just because I don’t like this shirt. There are plenty of other reasons you shouldn’t respect me as a reviewer.

Oddly enough, I can play most puzzle games. I think the people behind Lumines or Tetris Attack or whathaveyou actualy had colorblind gamers in mind: more often than not, puzzle games include individual symbols for each differently-colored block, so as to ease with immediate recognition. See how the blue (?) blocks have triangles in them, while the purples (?) have diamonds? These are the sorts of things colorblind people need in a game.

Also — and I’m editing this in after the fact, due to kacie360‘s comment below — rhythm games like Guitar Hero or Rock Band present absolutely no problems for me whatsoever, for two reasons.

Firstly, the green and red notes in each game are vibrant enough so that even moderately colorblind people should be able to tell the difference between them. Colorblindies™ can still differentiate between certain vibrant types of green and red, which is why we haven’t all been killed at traffic intersections.

Secondly, guitar/drum/whatever games structure their notes not just in terms of color, but by location. When I play Guitar Hero and see a note coming down on the leftmost fret, I know to press the leftmost fret. When I see one in the middle, I hit one in the middle. Frankly, this isn’t all that different from what regular gamers do; non-Colorblindies™ don’t actually look at the guitar neck as they play for the sake of color recognition, and I don’t either.

Which brings me, as most things do, to indie developers. Upon first loading up Peggle, I noticed that it had a colorblind mode. Turning this mode on changes this 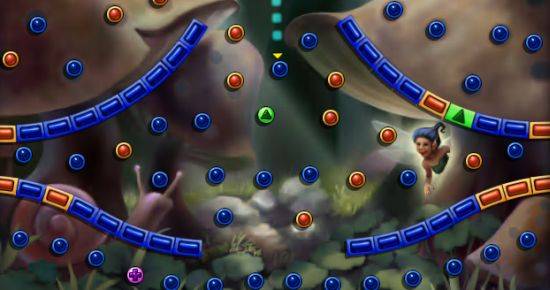 This colorblind mode prevents the game from being literally impossible to play for people who are red-green colorblind. The colors are made much more vibrant, as you can see, and notable blocks now have symbols on them.

Similarly, Audiosurf graciously allows the player to change up the color of the beat blocks based on personal necessity or preference; on the left, you can see the default colors, with my color-retarded changes on the right. 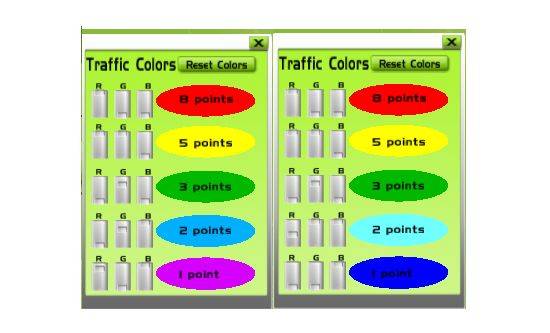 Again, I don’t mean to complain — I just wanna let you know what it’s like for the colorblind gamers out there. It’s not terribly difficult, being colorblind, just a bit different; I know more than a few of the Dtoiders out there are colorblind (Ceark is like, eighty times more colorblind than I am but bitches about it way, way less), and I figured it might be interesting for you sight-unimpaired people to take a look at our world for a little while.

Then again, maybe it wasn’t interesting at all and this reads more like a gussied-up LiveJournal post than a legitimate article. Either way, it isn’t my fault.