Rainbow Six has had quite an interesting history. After playing it in 1998 on a friend’s PC I fell in love, and so did mostly everyone else in the gaming community. For a full decade, Ubisoft pumped out game after game, most of which were serviceable at the very least.

But, in 2008, the future of Rainbow Six was put on hold, leading to the cancellation of Patriots in 2014. Fortunately, the franchise lives on in the form of Rainbow Six Siege, and I’m really enjoying it so far based on my playtime with the alpha.

This week, the Rainbow Six Siege closed alpha kicked off, featuring one mode (Hostage Rescue), two maps (a house and an airport), and 10 Operators (classes). Although playing a single gametype can lead to a certain degree of tedium after a while, I really enjoyed seeing the core components at work, and I think it’ll be worth checking out come release time later this year.

Hostage Rescue hosts a very simple premise: two sides, each playing the role of either offense or defense. Before the match actually begins, a prequel phase of sorts occurs, with the offense commanding rolling drones to locate the target, and the defense setting up barricades to hinder the capture of the hostage. It’s a really fun mechanic, as drones can leap through the air and the defenders can blow them up after locating them.

There’s quite a bit of stuff to do during this phase on either side. Teams can hole up with the hostage, or go out in the open, put down barbed wire on chokepoints like stairs, or tactically leave drones in a spot that will have a lot of foot traffic — allowing an attacker to switch views mid-match to get a better look. Those on the offensive will have plenty of fun rappelling off walls with the tap of a button (with the ability to go inverted at will), and defenders can set up their own labyrinthine corridors and traps to thwart the other team. While asynchronous multiplayer has the tendency to favor one side in terms of fun factor, I really liked playing both. 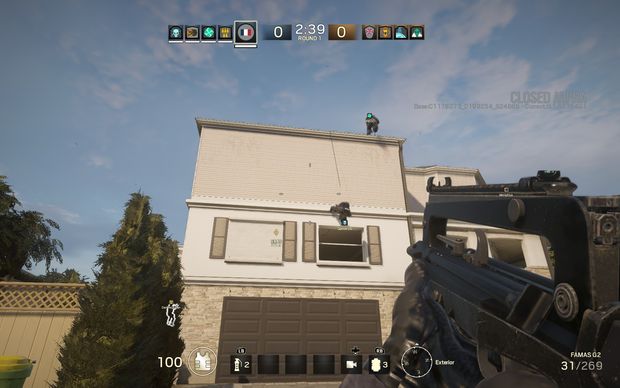 Classes are very unique, leading to some interesting counters. For instance one defender has the ability to see through walls at short distances, and one attacker can set charges to blow through barricades. At one point a player blew away an attacker while he was setting an explosive through the barricade while another player blasted through the ceiling and took him out. There are some “iron bars” in place so you can’t literally bring the whole house down, but it’s open-ended enough.

When choosing a loadout, players can very clearly see the icons of your team across the top, so even without direct voice communication you can get a well-rounded composition of classes. Teams choose their spawnpoints (and thus, where the hostage is located on the defense) for each round, and deaths are permanent until the next one starts. Because of the nature of shifting spawns, teams can both enter and defend the house in a multitude of ways every time.

In terms of its pedigree as a first-person shooter, Siege runs very smoothly on PC, and thank goodness, it’s not going to be held back by the previous generation — it’s set to only appear on Xbox One and PS4. The controls are very easy to pickup, but the two shoulder buttons assigned to each classes’ unique abilities is where the learning curve starts. Bullets have weight to them, and blowing away walls is satisfying every time. 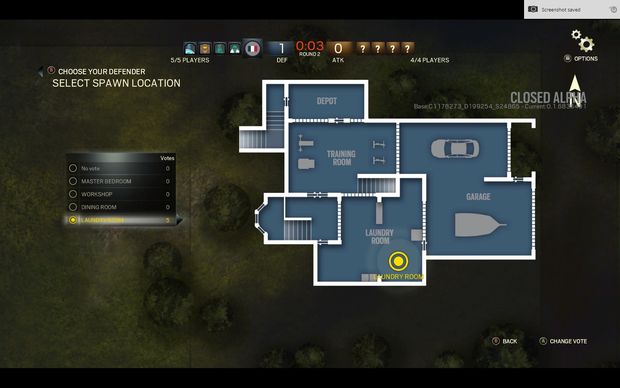 It’s too early to tell how Rainbow Six Siege will really turn out, but I’m impressed so far. It seems to have a great class system on its shoulders, and there’s a good mix of action and tactical gameplay abound. I can see this becoming a really fun eSport to watch if there are interesting teams involved.