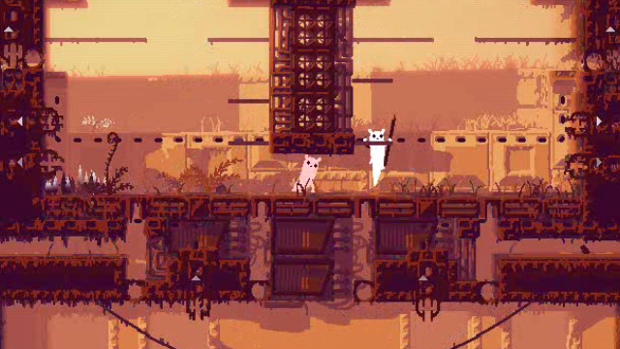 PUT YOUR EYES ON THIS GAME

Look at that art. That animation. That slugcat.

I saw glimpses of Rain World long enough ago that I had forgotten about it. How did I forget about this!? The liquidity of cats is a common joke as we watch internet videos of them squeezing themselves through socks and into bowls. Slugcat takes this to a whole new level. Just look at that physics-based globbing.

Rain World is a survival platformer focusing on the interplay between sneaking away from larger, more capable murderous beast and hunting others. After being developed as a passion project for the last several years, it has taken to Kickstarter, already in an obviously fully playable alpha, to hit the requisite polish for a wide release. The page is also full of more amazing gifs and a soundtrack sample that I will probably zone out to for the rest of the work day.

Right now it is slated for PC and Mac release. This is the hottest Kickstarter I’ve seen since Hyper Light Drifter, which rapidly expanded to include Wii U, PS4, and Vita releases when its campaign blew up. We reached out to see if any console release is planned and right now Rain World is only promised for PC and Mac, but the team is open to release on other platforms. So we’ll have to see how the Kickstarter pans out.

This would be a purrfect game to play on Vita. Existential crisis as I wonder if traditional cat puns are appropriate for slugcats.

Look at the slugcat pups