Keeping in line with the offbeat and interesting games that come from SCE Japan Studio, we have Rain. It’s being developed by Japan Studio, Acquire (Tenchu, Sumioni), and PlayStation C.A.M.P. (Tokyo Jungle, Echo Chrome) for the PS3 through download from the PlayStation Store, and it’s just the sort of idiosyncratic change of pace that Sony seems to foster.

Rain is meant to evoke the feeling of fright and wonderment that you might have experienced being lost as a child in an unfamiliar place. It does so by putting you into the transparent shoes of a young boy who has faded into invisibility in a mysterious city. He is lost, as alien to this world as the player. Only in the rain can he be seen — sort of like Ben Affleck’s vision in that terrible Daredevil movie. 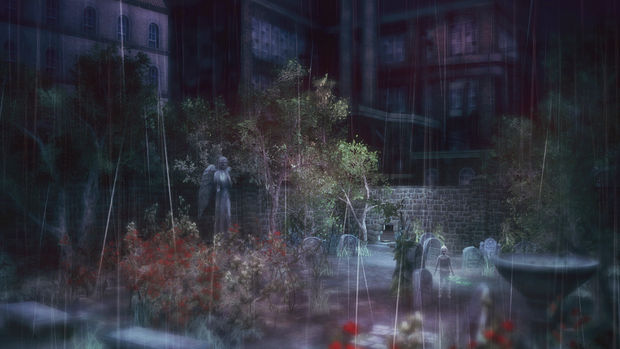 The most affective part of Rain for me came early on in what I was shown. The invisible boy, hereafter referred to as the Boy, is wandering aimlessly around the city to a pensive, somber, delicately keyed piano accompaniment. He wanders into an alleyway, at which point he completely vanished from view. Yes, your player avatar is entirely invisible when you’re not getting wet, save for some initial footprints in dry areas, damp vestiges of the feet that should be seen.

Going through this hallway invisibly, the Boy stumbles into all sorts of debris and obstacles, causing a cacophonic clack of tumbling crates and the like was surprisingly poignant. There’s something profoundly sad about his — in turn, the player’s — inelegant fumbling and stumbling around. While the Boy may be able to recognize his own existence when he’s invisible, he almost becomes nonexistent to the player, a fleeting remnant of what is there. Even when you’re initially scanning the ground for his footprints, you’re only ever seeing where he once was as you progress. There’s something to that metaphor.

Not surprisingly, the idea of creating an entirely invisible protagonist has been quite a challenge for the development team. Even now as they currently work their way towards their 2013 release, director Yuki Ikeda has explained challenges still arise from their undetectable main character. 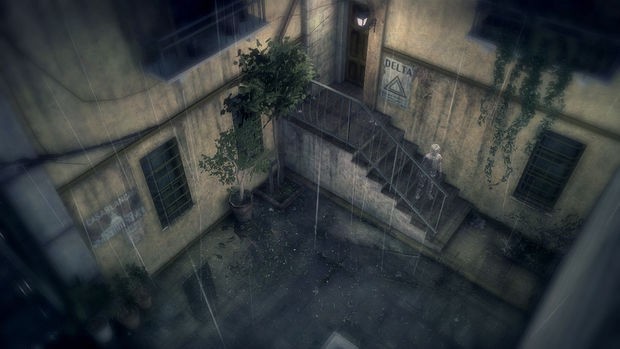 Exposition text occasionally fades in and out of the screen in stark white offering some commentary on what’s going on as you navigate the Boy throughout the world. The portion I was shown saw the Boy following an equally invisible girl who always seems just out reach. It’s not all somber navel-gazing, though. At one point, two Tim Burton-esque, dog-like monsters get a whiff of the Boy and give chase. Like the Boy, they’re invisible, given form by the rain, so finding covered areas is the key to safety against them. You have to effectively lose yourself to save yourself. It’s like a 90’s alt rock lyric.

Additionally, there was another chase scene, as well as a hints of organically integrated stealth-based gameplay and puzzle solving. Stealth makes sense, as you navigate covered (safe) and uncovered (unsafe) portions of the environment while the dog-likes patrol, snarl and snap. What I saw was a little facile; pattern recognition and sprinting between cover, but it works well enough. 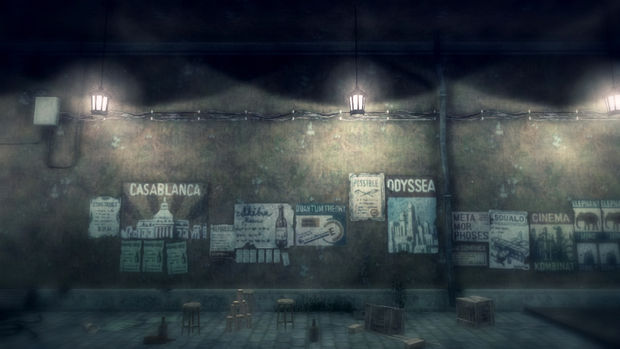 As for puzzling, one scene has you teetering across some scaffolding. The dog-likes bark menacingly below, chomping at the bit to get at you, eventually knocking it over. A little later, some scaffolding is blocking a path you need to take, and so you intuitively realize you should go in the other direction and lure the dog-likes smashing into the scaffolding to break it down. Hooray for human bait.

There is a cool unrecognizable familiarity to Rain’s washed out cityscape. It doesn’t draw influence from a particular city, but influence from many different ones can be felt metastasizing in the cobblestone floors and Metamorphoses and Casablanca posters on the walls. Everything comes together with the music, though, as Ikeda has carefully chosen tracks from the overall score to fit into the style and pacing of various points of gameplay. it won’t all be pensive and somber, either.

While it falls back on some traditional gameplay mechanics, I’m definitely excited to see more of Rain and explore it unique design feature, as well as its slightly nostalgic, rain-soaked world. I’m a sucker for rain.