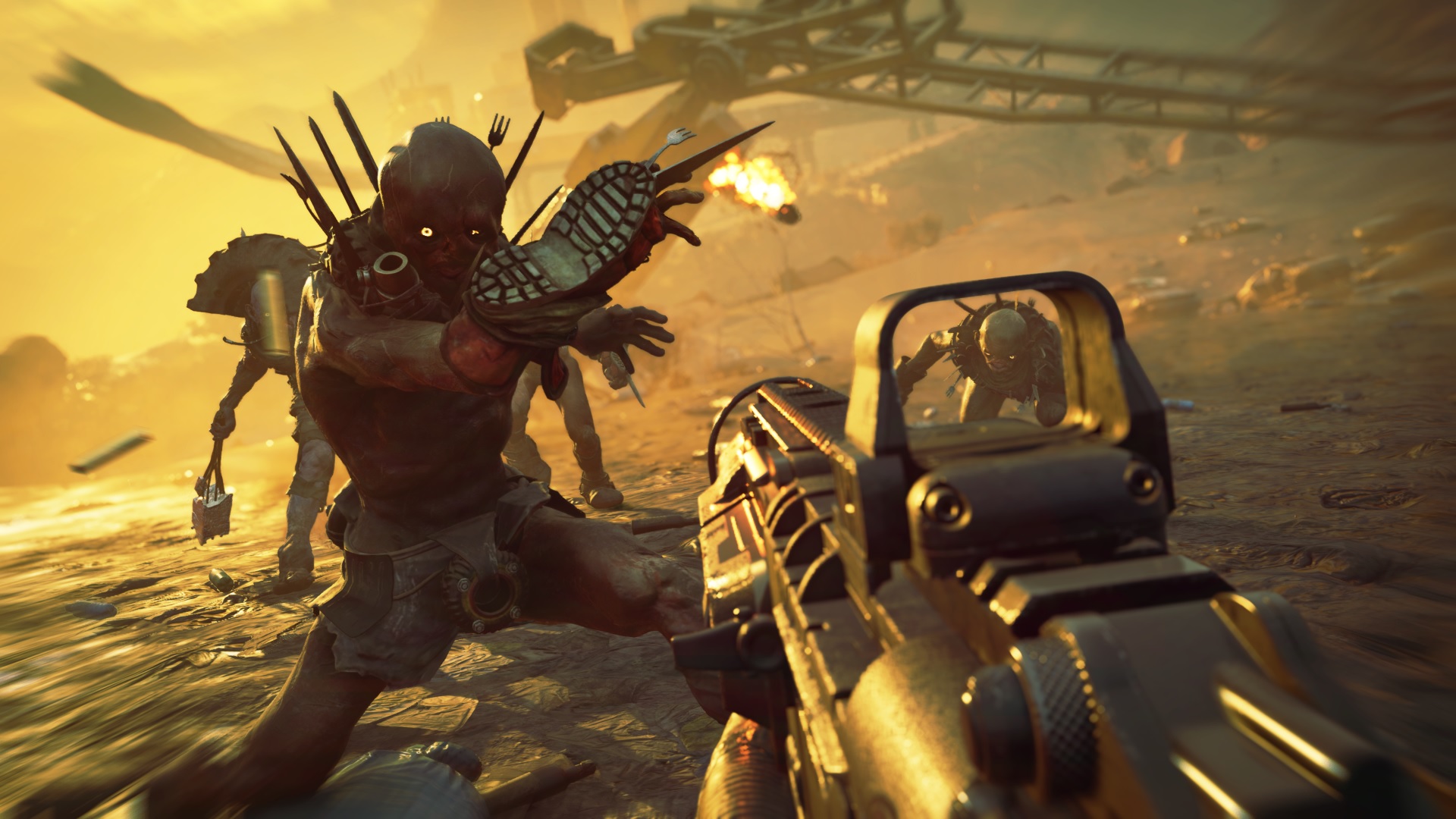 id Software’s Rage was a bit of a mixed bag back when it released nearly a decade ago. Trying its damnedest to combine a bunch of different genres together, it felt nothing like id’s back catalog, while lacking a clear identity of its own. Here was a shooter that was trying to be part-RPG, part-racer, part-adventure, and part-classic shooter. It only really nailed one aspect (the shooting), but never let that segment shine. Missions were over before you knew it and it was back to driving around an oddly linear wasteland to pick-up another repetitive quest.

When Bethesda announced Rage 2 last year, it was clear what needed to happen. Either id Software would have to focus on crafting another killer shooter or go full in on the idea of an open-world shooter in the vein of something like Borderlands. Giving the reigns over to Avalanche Software, Rage 2 does end up finding a much better balance of different styles, but does little to stand out from the crowd. 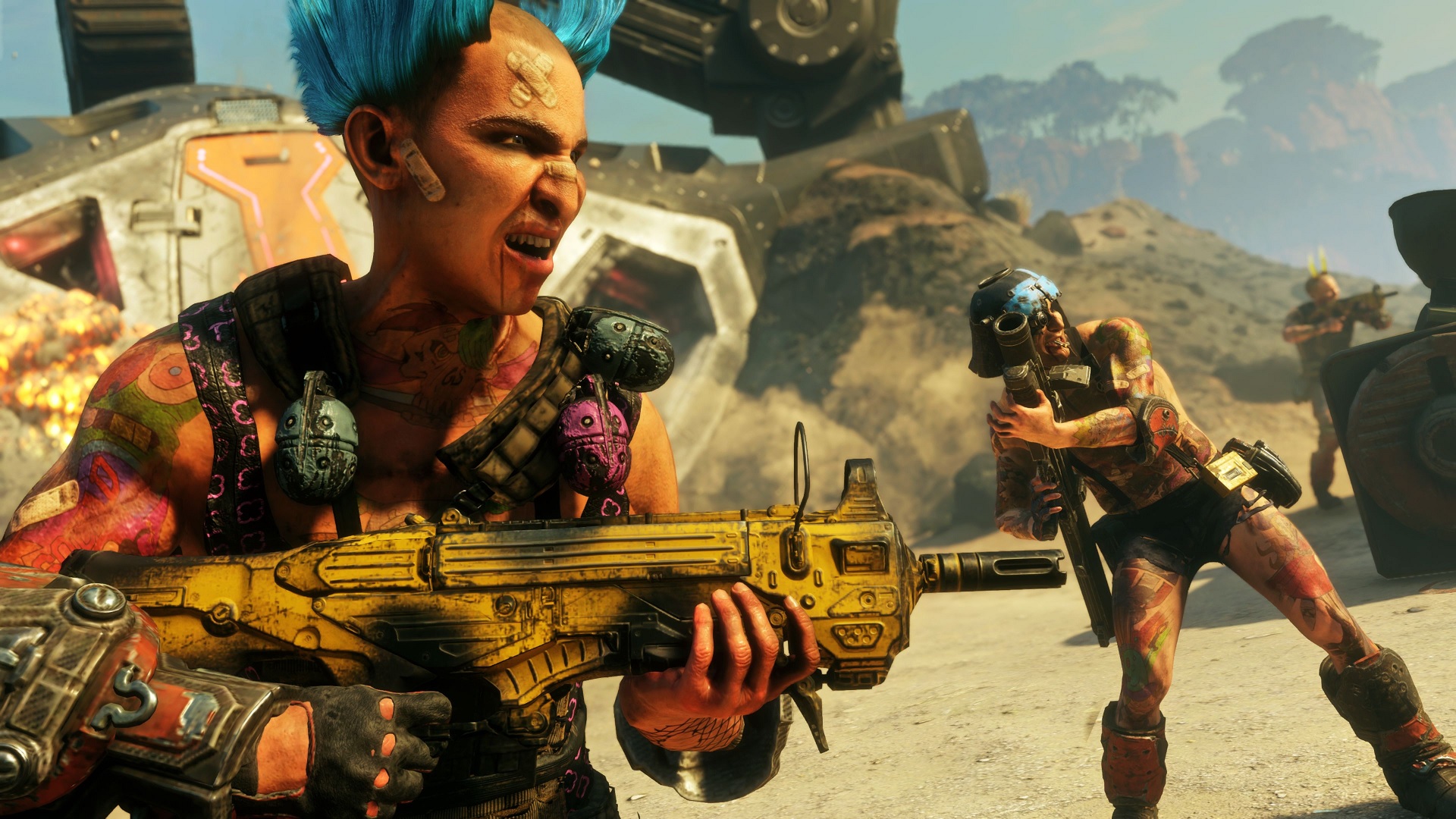 For the demo available to PAX attendees, Bethesda was letting people simply roam around the world Avalanche has created for his new vision of Rage. There was no real direction or strict limits, you could jump in your car and take off in whatever direction you wanted. I figured I would hit a wall somewhere, but I floored the gas and kept going for nearly 10 minutes without stopping. I went deep into some desert and was utterly lost.

I decided to pull up the map and that’s when a sense of dread swept over me. Maybe as a kid, I would love having a gigantic world to explore, but Rage 2 reminds me of all the insanely large maps that Ubisoft loves to churn out. It also has just about as many icons as any Assassin’s Creed game, with possibly 100 different items to visit. There are outputs, convoys, hidden locations, caves, and even main missions for you to dig into. It’s ridiculously overwhelming and just makes me think of how much time I’d be wasting to finish it all.

Seeing all of that, I closed the map and decided to drive to the nearest icon. A convenient on-screen compass shows the closest location of interest, so I hopped back in my car and took off. When I got there, I was greeted by some kind of automated turret that was firing lasers at me. I took out my “smart” rocket launcher and proceeded to fire a bunch of missiles into it. Being a “smart” rocket launcher, I couldn’t fire at will but had to wait for every single rocket to lock-on and alert me to it being ready to go. Talk about a momentum killer. 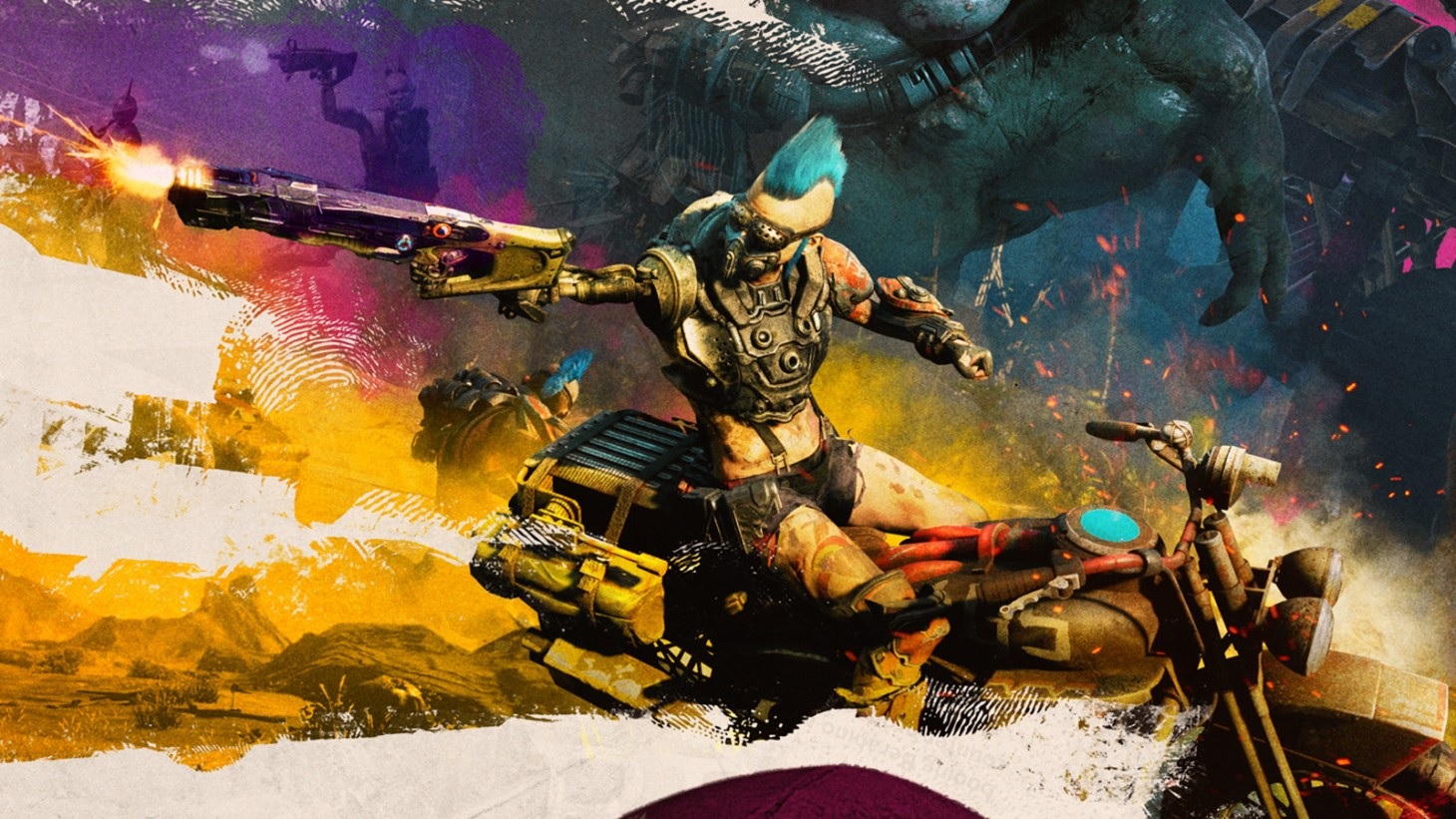 Once I was done with that, I saw a convoy driving by and decided to chase it. I hopped in my car and starting blasting rockets at anything I could lock-on to. When I depleted my ammo, I switched over to a turret and held the fire button until some guys exploded. There were a bunch of dudes on motorcycles following the main convoy that I believe was transporting explosives somewhere. After dealing with them, I had to repeat a process of shooting an exposed core on each segment of the truck before it dismantled the whole thing.

Since that chase sequence took me even farther in another direction, I was lost yet again. I spun around in a circle to see if anything was nearby but noticed the distance approximation said 1,400 meters. Not wanting to travel across all of tarnation, I gave in and picked out a much nearer location on my map.

When I got there, you could be mistaken for assuming this little garage was ripped straight from Borderlands. It had a few enemy vehicles and some regular enemies guarding what I thought was going to be a nice prize. Not one to run from a fight, I ripped out my assault rifle and proceeded to head-shot everyone without much effort. I’m not sure if aim assist was on, but the current build of Rage 2 did not have keyboard controls functioning properly. I was forced to use a gamepad, so it felt almost like the game was helping me a bit. 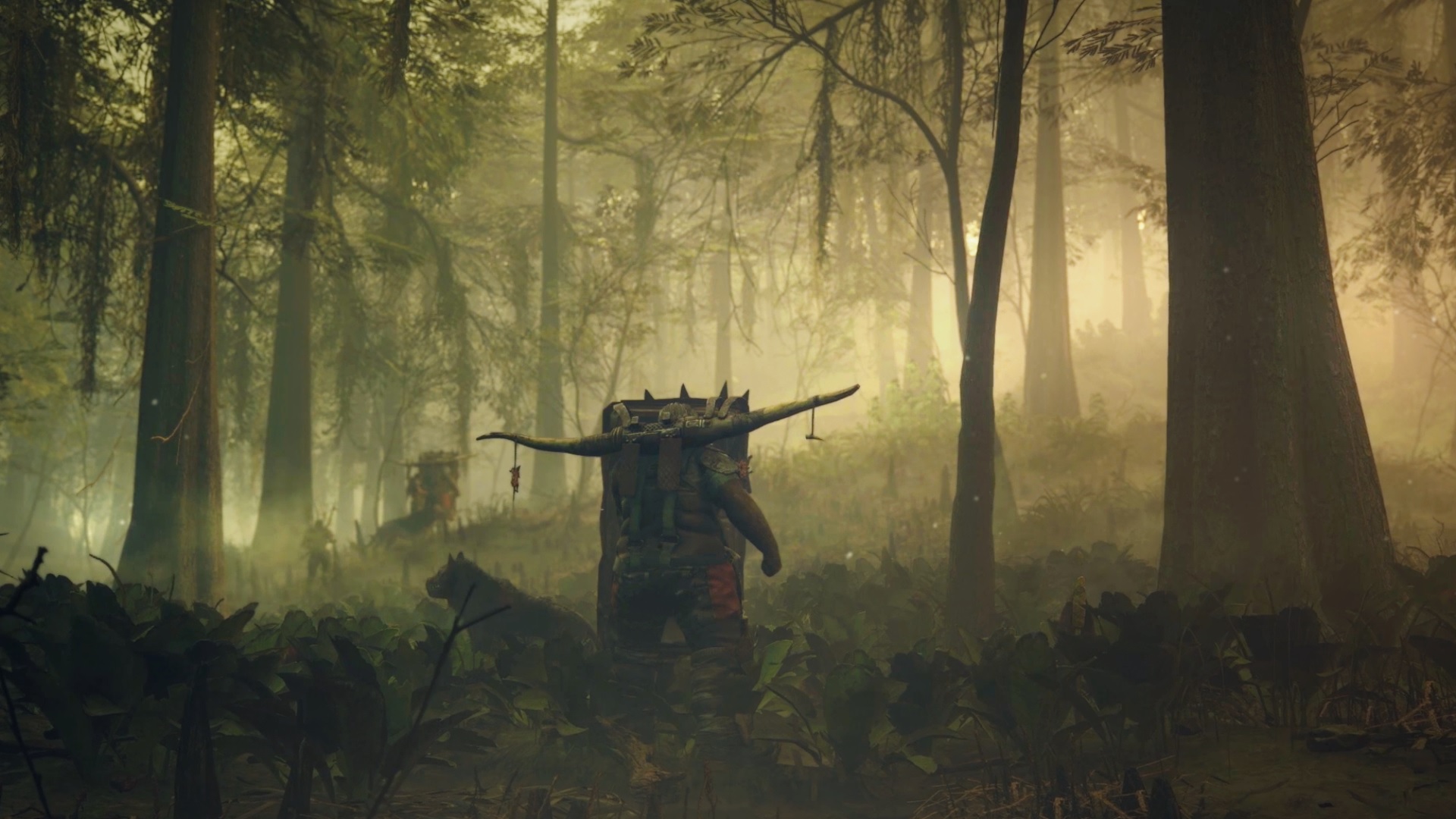 You also have some magic attacks, or whatever the game calls them (no tutorial was present in the demo) and they could potentially add some flavor to the proceedings. They aren’t a wholly original addition to shooters, but you get cool moves like a ground pound and telekinetic tosses. Sadly, I didn’t encounter anyone that needed these moves performed on them. I was head-shotting people with an assault rifle while they were tiny dots on my monitor. I didn’t see the point in mixing things up when simple bullets were fine enough.

At least the visuals were nice. Being powered by the latest version of id Tech, Rage 2 is comparable to both Doom and Wolfenstein 2 in terms of raw technical prowess. ID Tech 6 is being pushed much farther, with gigantic open areas that look almost photorealistic. Bushes ruffle as you drive past, dirt kicks up as you speed across the desert, and water splashes as you zip through streams with your foot to the floor. 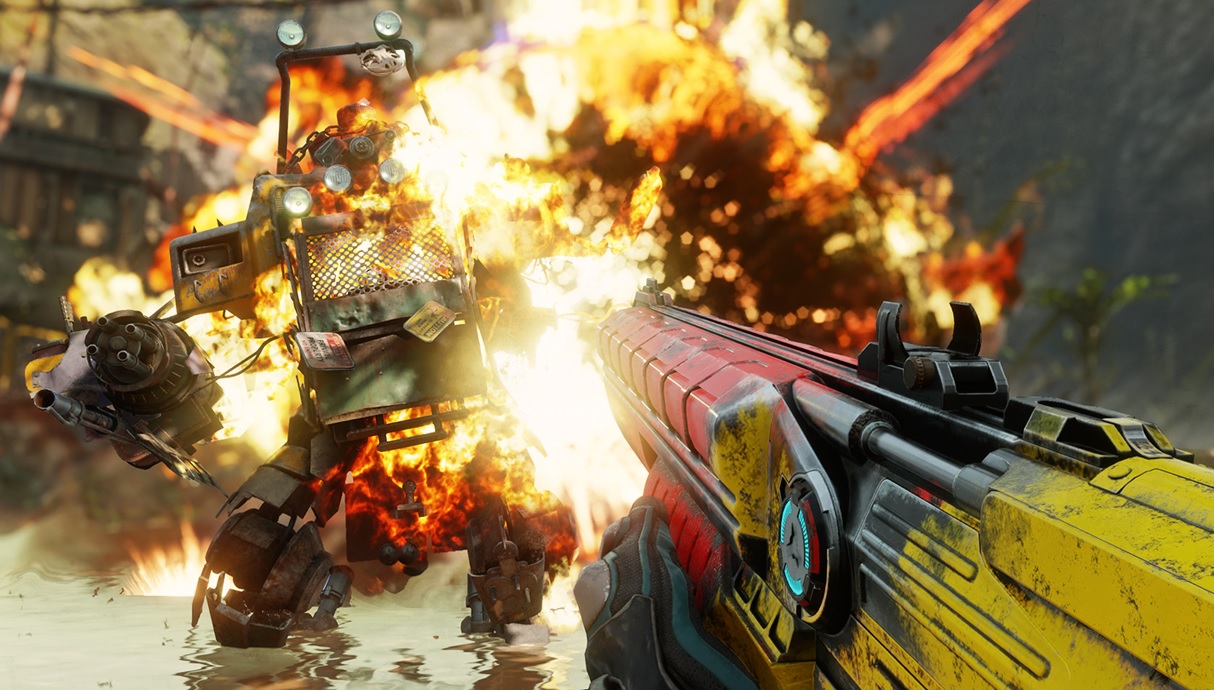 The only thing that sort of betrays this quality is the actual art style. I’ll be the first to admit that I like pink, but Rage 2 does not have an aesthetic that mixes with the color. You have these deep, saturated tones and then this obnoxious neon plastered on certain spots which, in my opinion, looks ugly. My only thought is that Bethesda is trying to my Rage 2 look as outrageous as possible, or it’s directly cribbing from Borderlands in an effort to steal Gearbox’s thunder.

That could have potentially worked if Gearbox didn’t just announce the long-awaited Borderlands 3. I wouldn’t call Rage 2 a “looter shooter” by any means, but it certainly looks the part. The only other thing I can think to compare this to is the litany of Ubisoft open-world titles from recent years. When you remind me of Ghost Recon Wildlands, I really don’t want to come back for more.

At least Rage 2 isn’t shying away from going full hog in a certain direction. Maybe it isn’t for me, but you can’t fault a game for jumping into a genre that is popular with many gamers. Avalanche has proven it can make titles like this, so we’ll just need to wait and see what the end result is like. If all else fails, at least we can still throw around that rad ass wingstick.