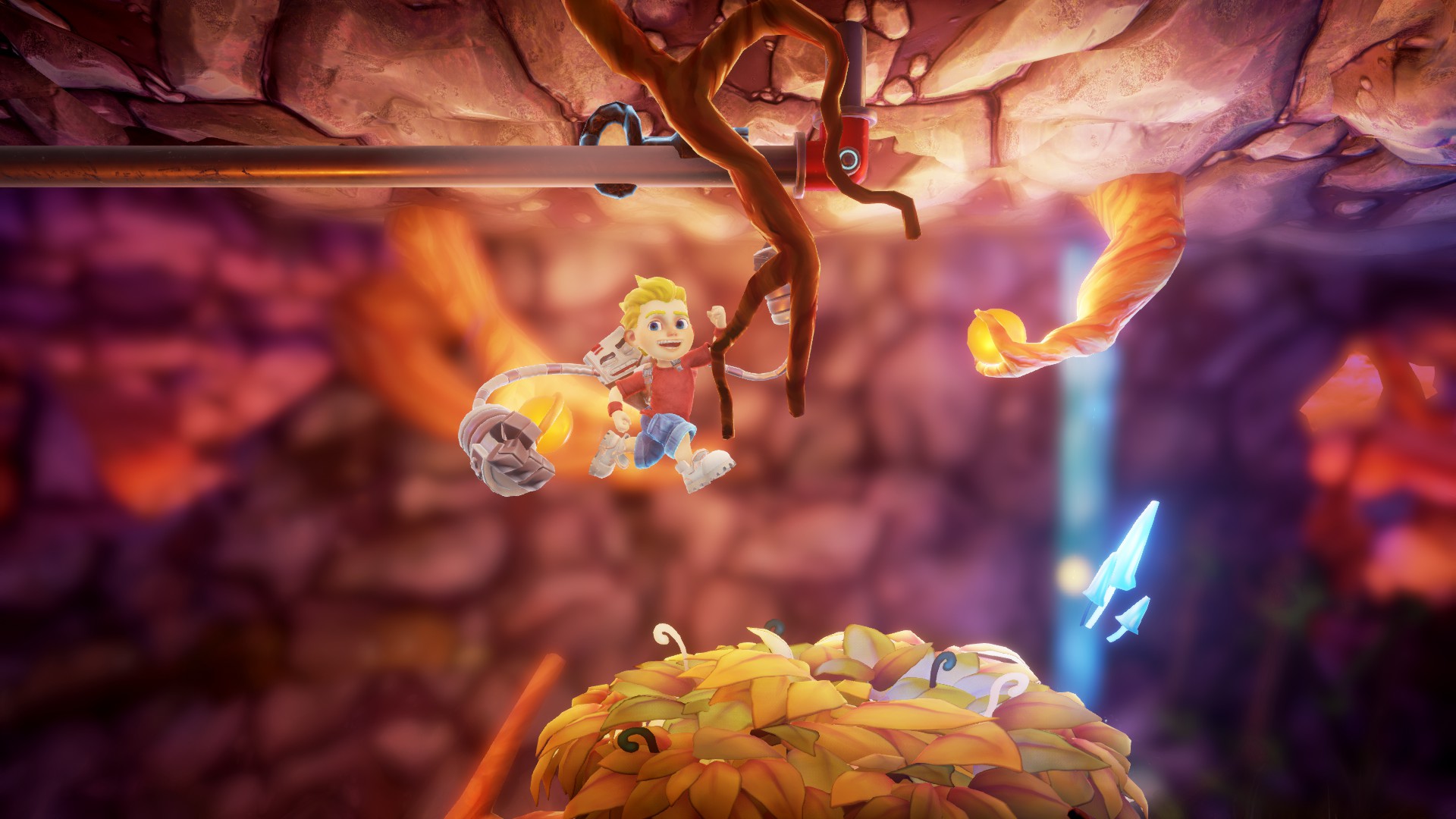 Rad Rodgers: World One is a game that, quite literally, came out of nowhere for me. We got a message from the publisher, 3D Realms, and I was blown away by the trailer. I wasn’t so sure the game’s humor would work, but the amount of polish was insane. Where was this title hiding?

Turns out, not much was known about it prior to a Kickstarter earlier this year. The developer, Interceptor Entertainment, launched its crowdfunding campaign with a simple goal: bring back the ’90s platformer. Taking inspiration from Commander Keen, Duke Nukem, and Jazz Jackrabbit, these guys were dead set on recapturing the early DOS glory of violence and puzzle solving.

While they’ve mostly succeeded, not everything about Rod Rodgers is a home run. 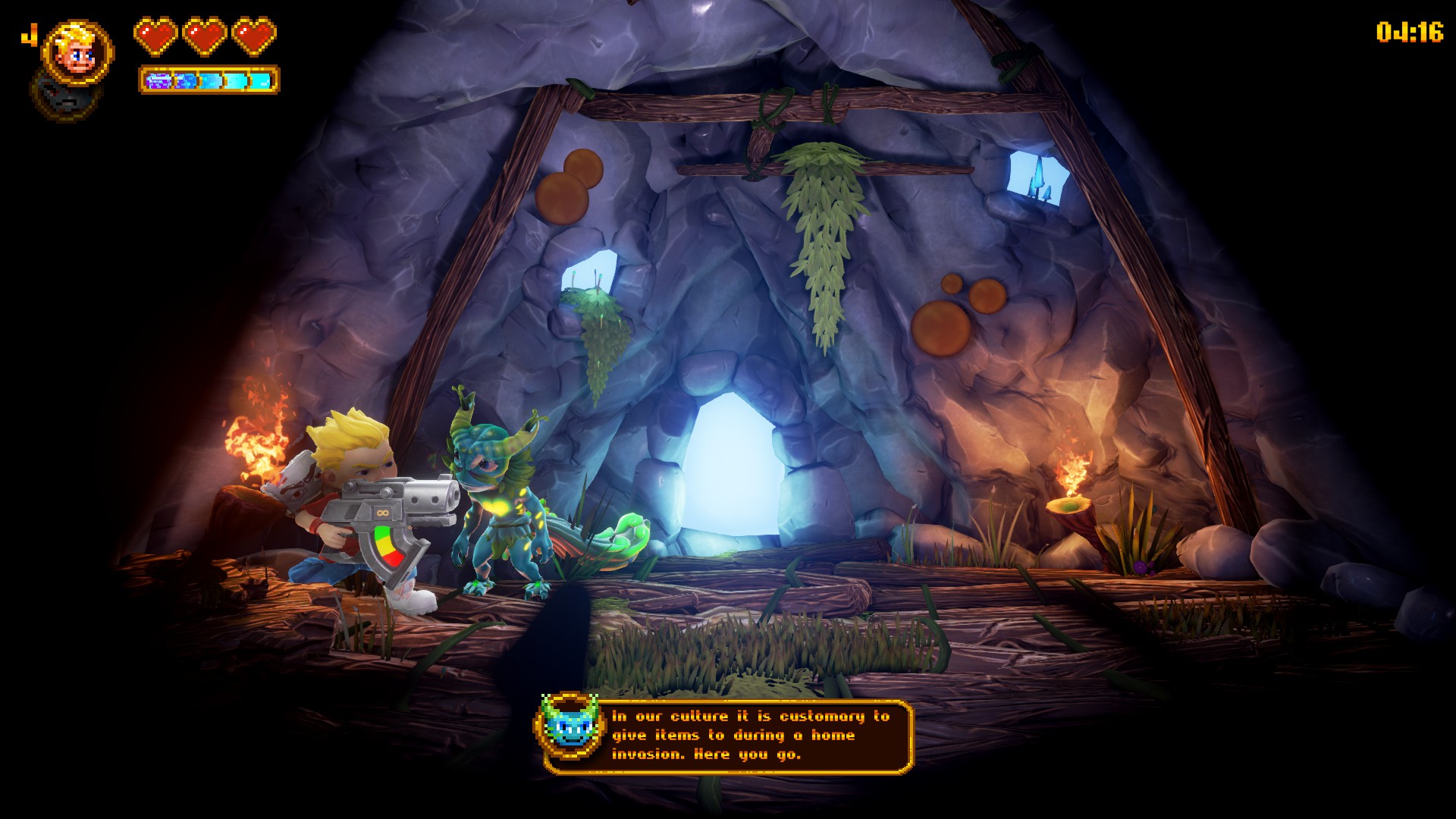 I’m going to get the best feature out of the way first; the graphics are unbelievable. Watching that initial trailer, I thought I was looking at an FMV. Rad Rodgers runs on Unreal 4 and looks phenomenal. This is like finally having a playable Pixar film as a game, something that only Ratchet and Clank ever managed to make possible.

There are a lot of bright and varied colors along with crazy particle effects and awesome atmosphere. Water rushes realistically, leaves ruffle was you walk past, and blood spews from your foes with a geyser that would make Tarantino blush. If this is the kind of stuff we have to look forward to with Unreal 4, then I’m on board for another generation of Epic’s engine.

That said, not everything about the presentation is top notch. The music is entirely forgettable. Even now, I can’t recall a single note from any of the tracks. There is a theme song on the menu, but I could replace it with any other classic gaming tune and it would feel the same. Hopefully this is just a problem with the early build lacking a majority of tunes. 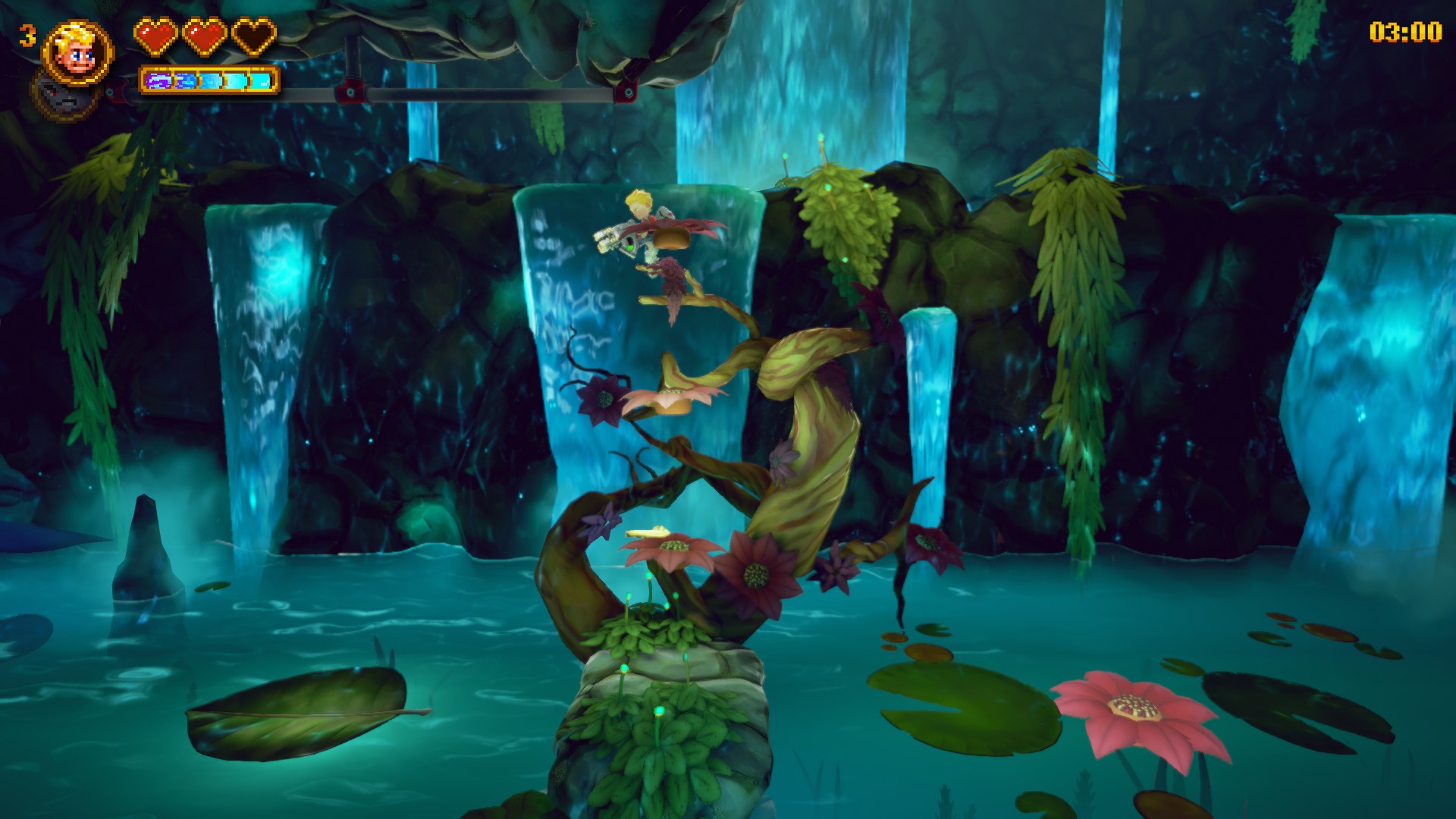 The voice acting is fine and all, but the humor is kind of hit and miss. The always classy John St. Jon voices your sidekick, Dusty. Dusty is a living console that happens to look like a Super Famicom with an incredibly foul mouth. Not every line is peppered with curses, but the legacy of Duke lives on through this plucky guy.

Rad is pretty generic, so far. His character is an encapsulation of the ’90s radical style mixed with childhood annoyances. His mom wants him to get to bed, but he’d rather play video games. I’m sure a lot of us had similar situations in our youth, but I don’t think we were as gun crazy as Rad is.

That being said, the plot is pretty reminiscent of Disney’s Tron. Through some weird kind of magic (or whatever), Rad gets sucked into his game. Upon waking up, Dusty is now alive and talking (and has a name). He instructs Rad to pick up a gun and get moving. 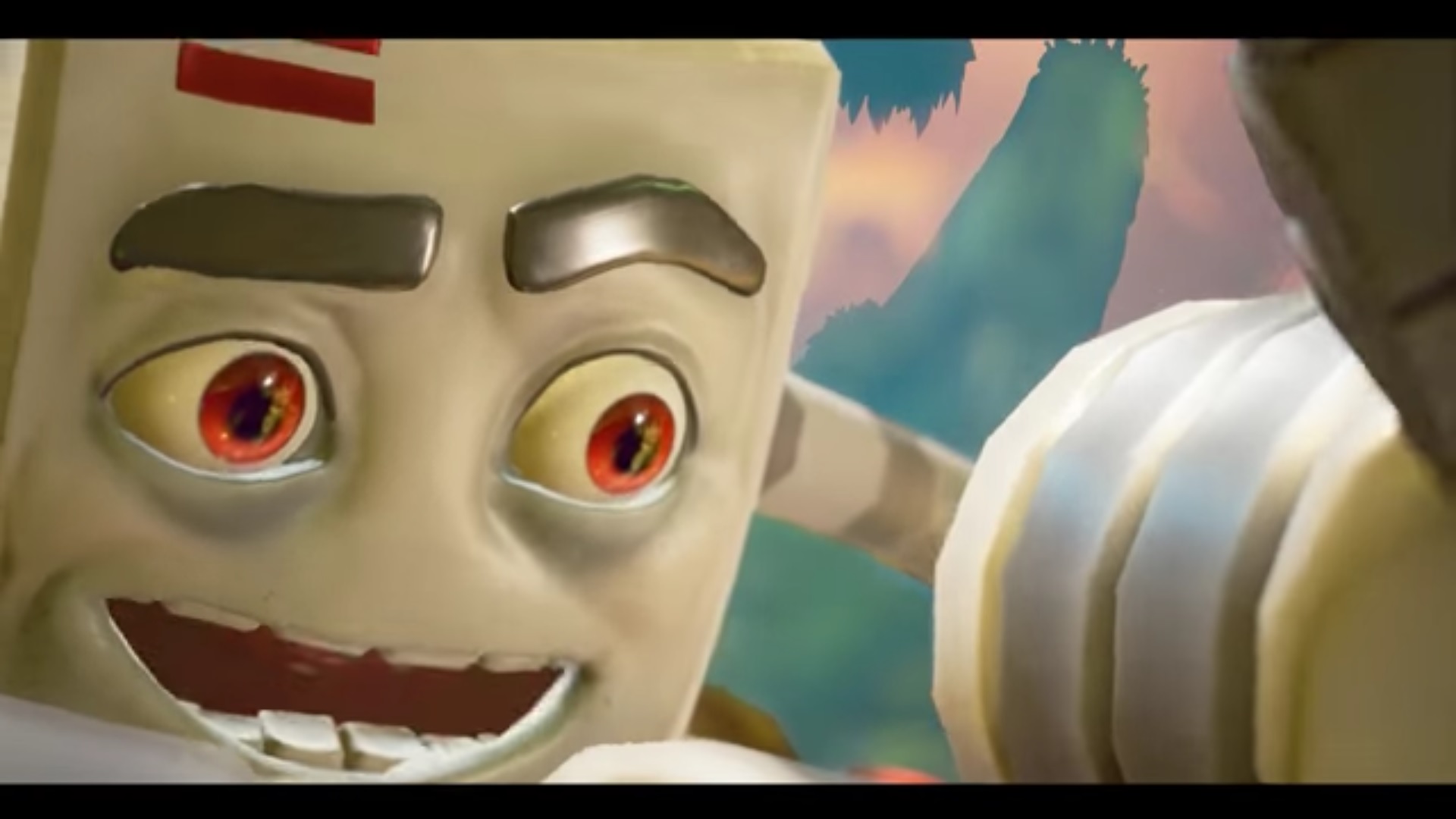 One of the first lines out of Dusty’s mouth is, “It ain’t polite to sleep during a cutscene.” Clearly you can tell that Interceptor is trying to poke fun at a lot of modern gaming tropes. The few NPCs you do find in the game world even utter lines about home invasions and Dusty laments how stupid tutorials are. Much like The Simpsons Game, though, these things are still present, despite being ridiculed.

The game controls like any number of side-scrolling action titles, though I specifically think of Contra. When using a d-pad (or WASD), you can aim in eight directions and fire. If you opt to use the right joystick (or mouse), you have 360 degrees of aiming to fire in.

It definitely is nice, if a bit strange at first. For quick segments, I tend to opt for the traditional method, but having fire mapped to both X (Square) and the Right Trigger (Left Mouse) makes for interchangeable methods. It takes a little getting used to, but works flawlessly when grasped. It is not unlike how Shadow Complex introduced combat. Instead of relying on antiquated limitations, the game makes use of modern technology while evoking a nostalgic feel. One place where it does fall short is with the weapon selection.

I like having multiple choices, but when you pick up one of the various weapon orbs, you have to exhaust the ammo supply before returning to your default blaster. I had situations where I grabbed a grenade launcher and couldn’t break some boxes that were in my way (the grenade bounced off of them). Why can’t I quickly switch back to the standard blaster? 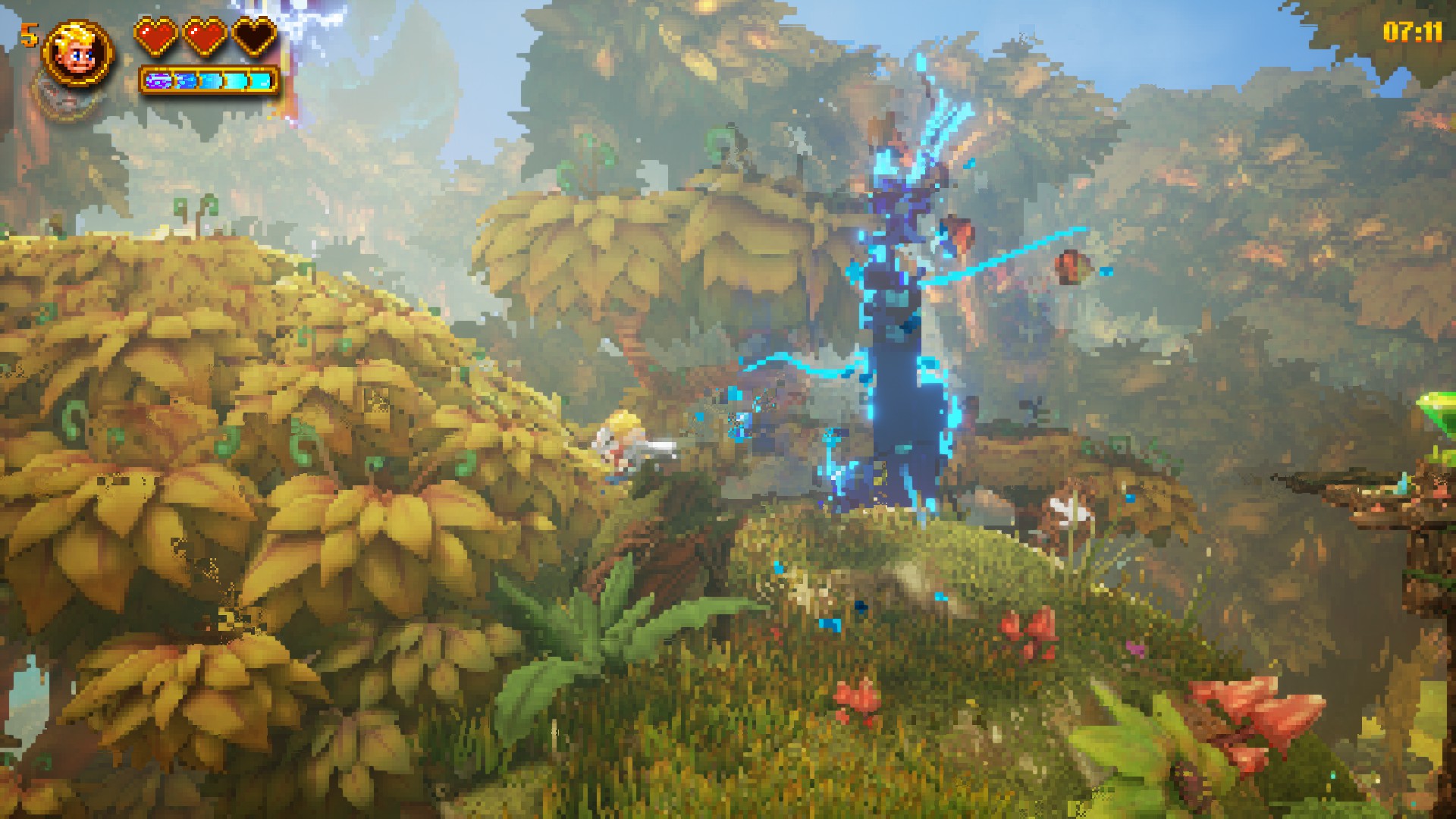 The one unique feature of Rad Rodgers is the Pixelverse, a realm that only Dusty can travel. In an effort to mock lazy game developers, certain areas of the environment are either glitched out or simply missing. Dusty can then enter the Pixelverse and correct the mistakes made by these people.

These sections are pretty boring. The combat with Dusty is lame and the pacing of these here is painfully slow. You pick up pixels after defeating enemies which allows Dusty extra time in these sections, but failing doesn’t incur a harsh penalty. At worst, you just waste some time.

Dusty cannot die while Rad can. So if you take damage in the Pixelverse, you just lose time and Dusty swears a bit. Take enough damage and you get bumped out with nothing else happening. I didn’t even think it was possible to fail, at first, but the lack of feedback is very jarring.

I also need to make mention of a lot of rough edges I saw. Level three, in particular, is kind of a mess in this early-access build. For starters, there is a plunger that was supposed to launch me to a higher platform that didn’t trigger. After playing for half an hour, I deemed the level unbeatable and stopped for the day. 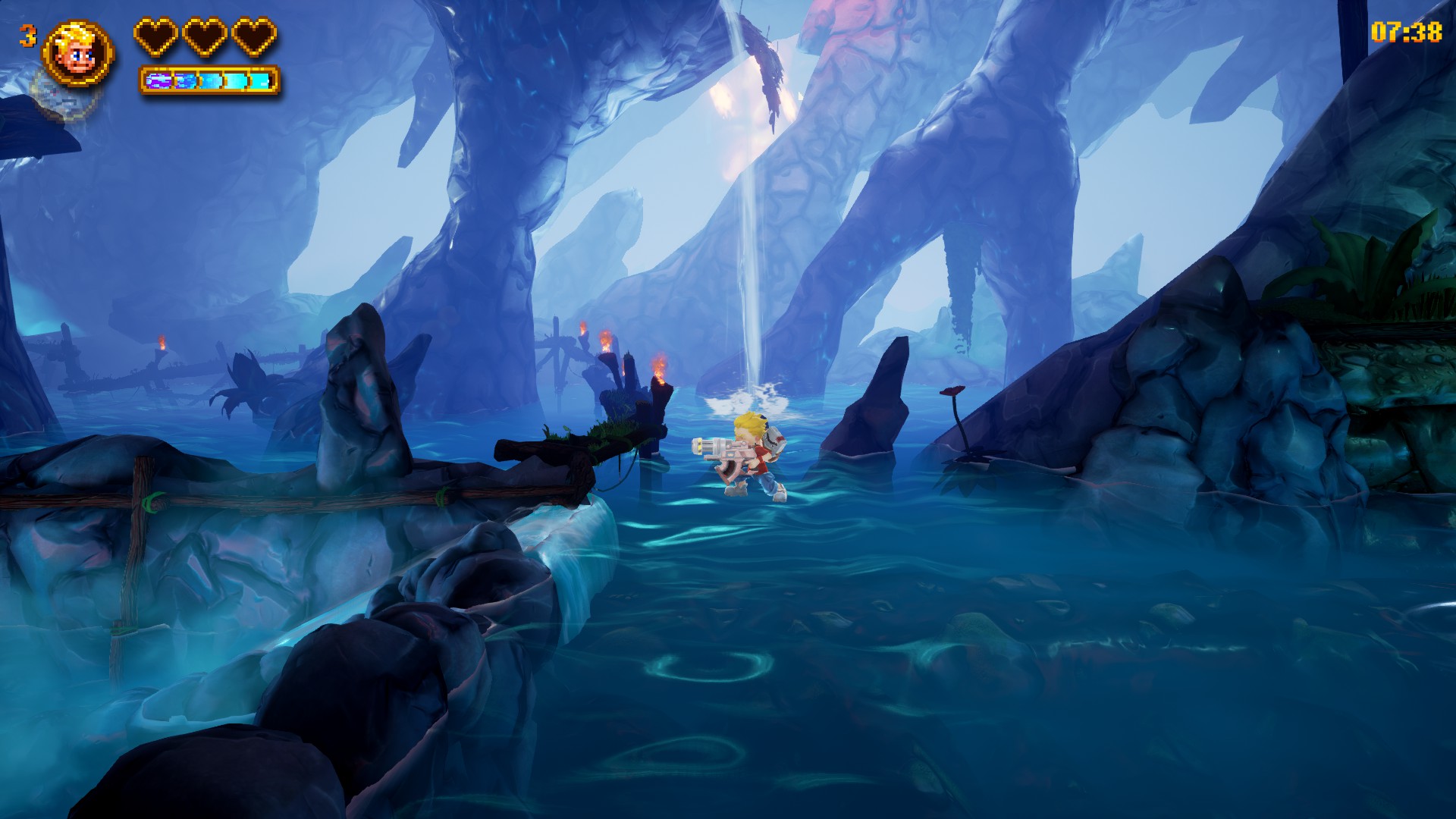 When I came back later, suddenly the damn thing worked. I looked everywhere, mind you, so I couldn’t have simply missed it. Later on in that level, Rad needs to jump on floating logs to avoid water (which he has a strange allergy to). Those logs never rendered, so I was confused about what I should be doing. It even happened again later in a segment where I needed to climb over some water and jump on logs, but I simply saw just water.

The combat can also be a bit boring as it doesn’t feel like it accomplishes much. I know a lot of older “classic” titles had enemies randomly placed about without regards to challenge, but I figured we had moved past that. Heck, one of the different types of enemies sometimes doesn’t even attack you all the time, which is just strange.

Then again, this is an early-access build. The game didn’t rake in millions on Kickstarter, just a mere $81,861. Shelling out $15 for an earlier build with the potential to grow isn’t that bad. I couldn’t tell you what is truly coming, but the first release is going to contain seven levels of varying challenge. 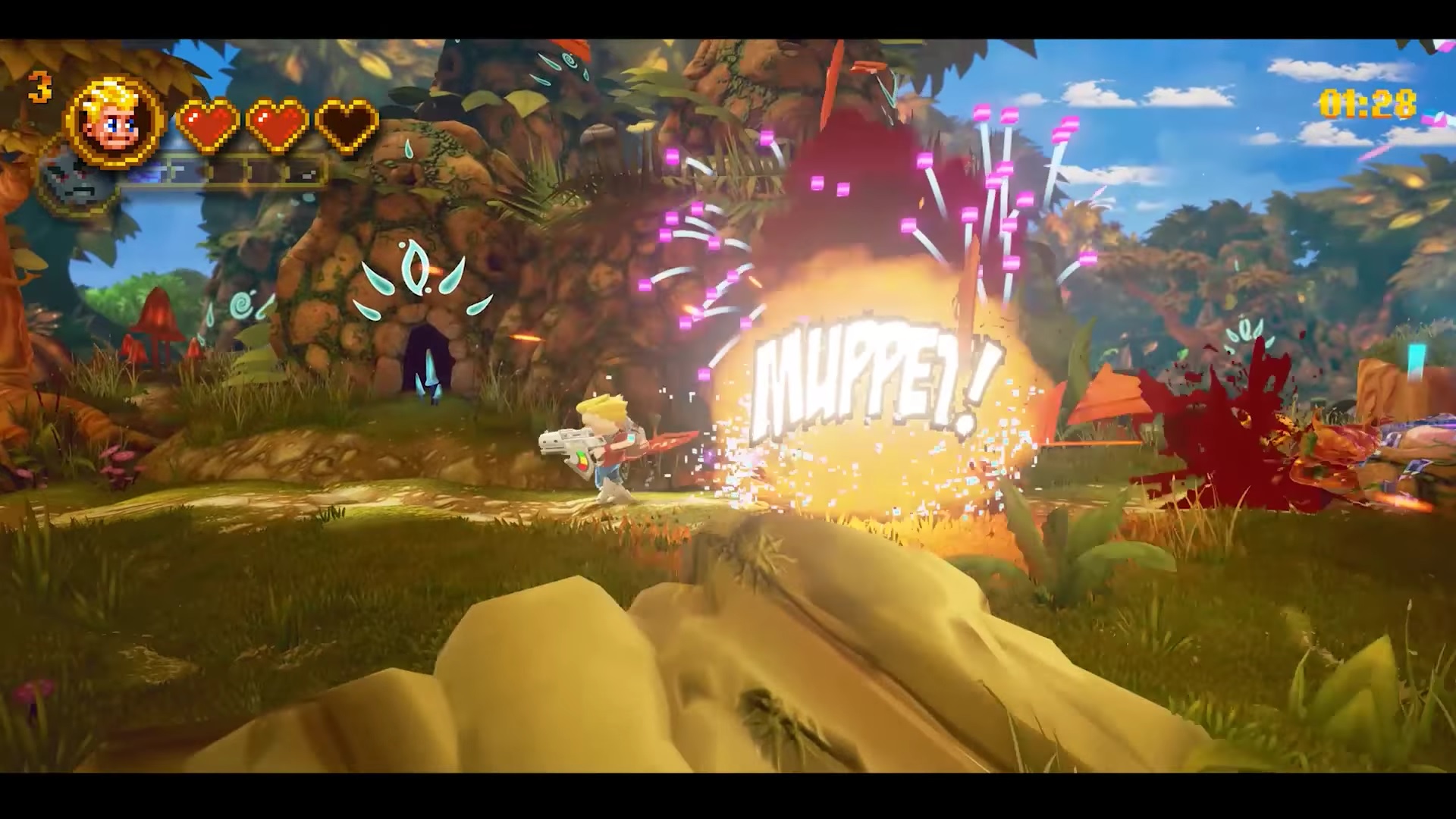 The developers eventually plan to add more worlds in an episodic format, not unlike how Duke Nukem 1 & 2 featured segmented gameplay. I don’t know if I’d settle for $15 a pop, but the initial purchase of Rad Rodgers should provide fun for a lot of people. Hopefully those bugs get squashed, though, because having crucial platforms and triggers missing really hurts the overall package.

As for when this will be launching, you can currently buy the game on Steam or GOG in early access. The full release will be on December 1, 2016 for $14.99. Along with the PC version, there will be a PS4 port for the same price. I wonder if Interceptor will opt for a Pro patch to get this in 4K (which would look magnificent).