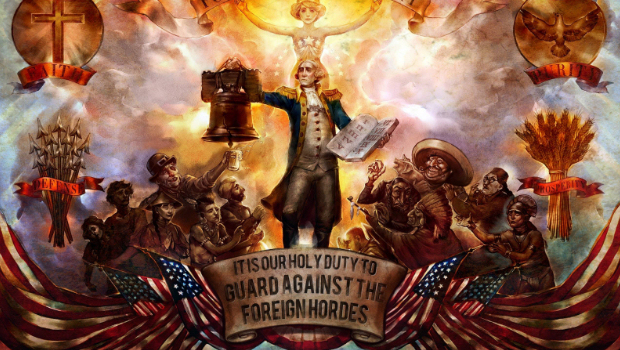 ‘Looks like a Jew trying to piddle on old small America’

The BioShock series has never been shy of offering political critique, and BioShock Infinite is biting closer to home than previous installments. The game themes itself around nationalism, racism, and what can happen when the love of America can go too far. Ironically, the folks at Stormfront missed the point, and set about proving it instead.

Stormfront is well known online for being a hub of racist tomfoolery, and a crazy old thread (discovered by PC Gamer) claims the objective of Infinite is to “Kill Whitey.” As you might expect, the self-martyrdom of the modern bigot is out in full force, as users show offence that a “Jew” like Ken Levine would pressgang white developers into making his anti-American game.

Yeah … it’s pretty wacky stuff. It also goes to how just how normal racists think they are, that a game about extremism, to them, is about killing regular white people. No. Regular white people don’t think the way you do, Mr. Racist. The game’s not about us.

You can read the whole thread for yourself if you want to be astonished at the victim complex of mostly white men (literally the most downtrodden people in the world), but we’ve also selected some juicy highlights for you to take a gander at. Be warned, of course, that some of it gets rather vile.

“The game is going to thoroughly mock and denigrate pro-white and patriotic themes. Columbia is an expression of Aryan genius, progressiveness, and creativity turned into a racially and ideologically pure utopia, but of course it all goes wrong and is fundamentally flawed, thus the plot of the game unfolds. The fundamental flaw of course is any and all pro-white ideology.” – Germanix.

“I wish somebody would make a game about an ethnically pure jewish utopia whose inherent aggresion and hatred of all non-jews causes the inevitable extinction of all human beings, jews included. That would be more in line with reality.” – Guts

“That really sucks that they made they theme of the game to destroy what is left of America. Instead it should have been killing an all-powerful federal government and racial non-white groups that bring nothing but violence and want ot end America and turn it into Africa or Mexico. And they worked so hard on that game, such a disappointment with the story line being 100% anti American and anti White.” – mrwigg1es

“The anti nationalist sentiment is more than slightly obvious really. It looks like a jew trying to piddle on old small america.” – Astragoth

“Not surprised, the owner of Irrational Games (the company who made this) is Ken Levine, a Jew. He and his like minded clique come up with these ideas, then get their white programmers and 3D designers to make it beautiful and marketable. It is thanks to the white piss-ons that the game looks as beautiful, and has the fun playability that it does, it is thanks to Levine and the higherups that it has the propaganda that it does crowbarred into it.

“99% of the people who actually make the games are white, all the designers, programmers, artist etc. But 99% of the company owners with the actual power are Jewish, such as Levine, Robert Kotick of Activision (the guys who make Grand Theft Auto) etc. Sadly the game industry is getting more and more taken over by the chosen. Anytime any small developer has any success, one of the big Jewish owned mega companies buys them out.

“Since games are distributed and advertised through much of the same pipelines as Hollywood movies, Jews have a temendous advantage in the industry, since as everyone knows they already control Hollywood. This means competition can be choked out, and their own games bolstered to success. Really makes me sick to watch it happen.” – Nexus 6

“To all the ‘gamers’ so addicted to their games and going along with every new trend and hype with each new title that’s released, incapable of objectively looking into them without even wanting to give up a bit of their ‘needs,’ I say: Enjew your beloved games, continue paying those vile Jews who’re out to destroy our race.” – End White Genocide Now

“Wow –That game could hardly become more anti white. I am not surprised that the media brainwashed masses can not admit to seeing it. It is very much like trying to debate a liberal over gay rights. They will support the transvestites no matter one says simply because tv told them to.” – Rictoven2

“I can’t believe it… yet at the same time… I can. I have a hard time believing those of you who say you cannot see what the big deal is. This is payback, pure and simple, it is a (barely) subliminal portrayal which depicts the patriots behind the tea party movement as the crazy, racist, and obsolete morons that the media has been trying to convince people they are. It is a multi-million dollar attempt to further convince a youth that the patriotism these individuals are longing to revert to is simply a buttered-up way for them to mask their true and evil xenophobic allegiances and intent.

“It is to remind them that the principals and foundation of our nation are not to instill pride but to instead attribute shame to anyone whom would. It is to vilify our founding fathers and those who would honor them, and to leave upon the youth the impression that they will only evolve when they are free of the Constitution. Why bother to fight and expose yourselves, when you can subtly convince those who oppose you to destroy themselves without any conflict at all? I’m left completely in awe upon viewing this video. I am in awe yet again of just how intelligent and insidious the enemies of our people and our country can be when threatened and forced to retaliate. It’s sickening. “On a lighter note, I know of at least one brilliant young game designer who is a regular here on SF and has a very different perspective to reveal to the youth than the one that has been forced upon them since birth. I can only hope and I do suspect that there are others like him as well, who both hold sacred the best interests of our people and keep a keen eye on the left.” – vius

“It’s good that your informing us on this advertisement because I feel that it’s a reminder that we must take action against these advertisements of hatred. I am going to complain to the company saying that I’m not going to buy their game because it is racist, I am also going to show this to other news networks saying that this advertisement is racist towards Whites, I am going to fight this commercial as much as I can and in every way that I can and make sure that this poodle doo prejudiced company gets the message and they know that this kind of advertising won’t be tolerated. I suggest that you guys do the same.” – YouSinYouWin

“Duke Nukem is filth, John Carmack is married to an Asian, Red Faction is neither an FPS or pro-nationalist, and the first BioShocks were terrible.” – Loland