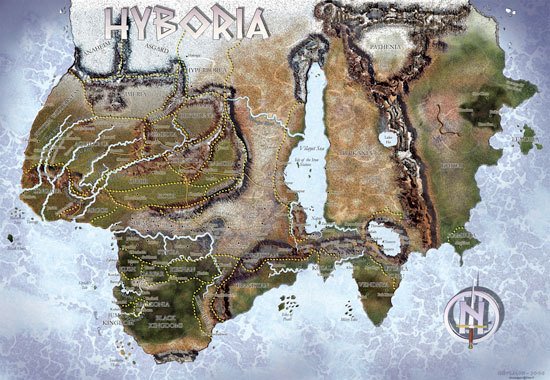 As a black gay Irish albino, I know the sting of prejudice, the invisible walls of racial stereotyping that isolate me from my fellow men. I hate it. I hate and I hate and I hate, even going so far as to declare myself Imperial Wizard of my own secret society for the Advancement in America of Black Gay Irish Albinos. I have not attracted any other members yet, but if you’re white, and if you’ve ever woken up in the dead of night to find a stuffed Pillsbury Doughboy Doll, crucified upside down and burning on your front lawn, I’m sorry to say that was me.

But I think Robert E. Howard has gotten a bum rap as a racist for his Conan stories, and, by association, I think Funcom’s latest MMO, Age of Conan, is being unfairly tarnished by the same brush.

Taking a look at the Age of Conan forums, it’s easy to see that there’s a common set of people convinced that the Conan stories were filthy exercises in racist hate-mongering. In this thread, for example, one Age of Conan fan comments:

Conan is a misogynist and a racist, a fantasy reflection of his creator’s worldview.

Oh yeah, Conan calls people “Black dog”, kills them, and gets the gerl in the end through a display of infantile machoism and “Triumph of the Will”.

Ya, I’m reading Conan: The Hour of The Dragon by R.E.H. and the first thing that popped out to me was the term negroide or something like that. So far he’s presented a depiction of black poeple in his books as primitive and neanderthalish. It’s kind of interesting but at the same time it’s very unedgucated.

Leading to this final conclusion:

Arguments so meticulously wrought, put forward with such erudition are certainly compelling. But one wonders what sort of racially-sensitive Cimmerian murder machine these guys were imagining when they came to the Conan mythos.

It’s true, Conan does call some Stygians “black dogs” right before he drives an axe through their brain pans. It’s odd that, from the perspective of these enlightened 21st century free thinkers, pointing out the color of someone’s skin in anger is worse than just murdering them in anger.

It’s also true that Howard uses the term “negroid” to describe Stygians and other black races. But, of course, in 1930, when Howard was writing, that word wasn’t considered racist: it was widely used as a term of now-outdated anthropological description. Howard is, perhaps, to blame for not being forward thinking enough to refer to his Stygians by the politically correct term “African-Americans…” except, of course, that Stygians are neither Africans or Americans. They are Stygians.

And that’s the rub. In my opinion, Howard’s supposed racism was actually a very clever literary device, less racist than a literary example of cultural archetyping. In essence, in creating Hyboria, Howard wanted a large fictional canvas upon which he could indulge his love for history and historical drama without having to be burdened with the responsibility of rigid historical accuracy.

The literary method Howard used to achieve this was very clever. Instead of creating an entirely fictional world, he imagined a Eurasian super-continent, rife with civilizations unrecorded by history. However, Howard still wanted to be able to call upon the vague outlines of his reader’s historical and cultural knowledge: populating his world with mythical civilizations, he wanted the Stygians to evoke the mysticism and necromancy that permeates our impressions of early Egyptian culture. He wanted the Acheronians to inflect the opulence, decadence and might of the Roman Empire. For the Cimerians, he wanted to invoke Celtic fury and ruggedness. For Aquilonia, Howard wanted to invoke the chivalrous mythos of France’s Carolignian Empire. And so on. But at the same time, he did not want to be tied down by all of these civilization’s historical constraints.

What we have then are less racial stereotypes than archetypes based upon the cultures of long dead civilizations which bore little resemblance to even the contemporaneous races and nations of Howard’s own time, let alone ours.

The Age of Conan developers have been understandably defensive about Howard’s perceived racism, and that’s certainly a wise business move: it simply isn’t worth starting a controversy about, especially when — with a few small alterations — they can take advantage of the breathtaking richness, the lavish viscerality and the epic scope of the Hyborian Age without alienating any focal groups.

On the other hand, it does strike me as odd, a smidge hypocritical, because while racism should certainly be avoided, almost all MMORPGs and TBS games are based upon a racialist design element. Granted, these are often abstracted upon imaginary races (although I would point out that all of the peoples of the Hyborian Age are races of the imagination): in World of Warcraft, for example, choosing to play the undead over a Tauren gives you different benefits. The Civilization series or the Age of Empires series are also excellent examples of racialism in games. Almost every one of us has made a conscious decision on which race to play when picking up a new game, and most of us never think twice about it.

At the end of the day, I don’t really know if Robert E. Howard was a racist. I know very little of his personal life, and, in fact, it is not so hard to swallow that he may have been just as racist as many other people who lived in his time, when most of America was white and the human instinct to fear and hate the unknown was more largely unchallenged.

But it’s his literature that counts at the end of the day, and from what I’ve read of the Conan stories, his supposed literary racism is a clever literary device to quickly put a reader in a world with a minimum of exposition or confusion. His technique is not much removed from the same sort of racialism you find in many popular games. Yes, in Conan’s world, most blacks are slaves… but Conan spends a great deal of his time in Northern climates, where blacks would have been enslaved within the fiction of his world. And most Stygians are evil… but again, not all.

Ultimately, it seems a shame to me that a game set in such a rich, vibrant would as Hyboria should constantly be apologizing for its source, especially when the source is not nearly as insidious as some would make it out. For me, you’d be far better off apologizing for the rampant misogynism of Hyboria, where all women go around topless and throw themselves into a swoon at the first sign of danger. But, of course, no one will get outraged by that, because if gamer’s can’t accept any hint of racism in their games, they will always enthusiastically accept misogyny if it means they get to see a nice set of tits. And I’m right there along with you guys.

This is obviously a contentious subject, and I know gamers are fantasy readers. Please let me know if I’m seeing Howard through glasses rose-tinted by my fondness for the many lusty Sunday afternoons I spent as a boy, curled up and transported to Conan’s Hypborian world.

Along with Eliza Gauger, Florian Eckhrdt is Imperial Wizard of Ectoplasmosis, a fringe art and culture blog. He also writes far dorkier stuff at AMC’s SciFi Scanner, a sci-fi blog. He ate olives for dinner last night and now feels a bit briny.