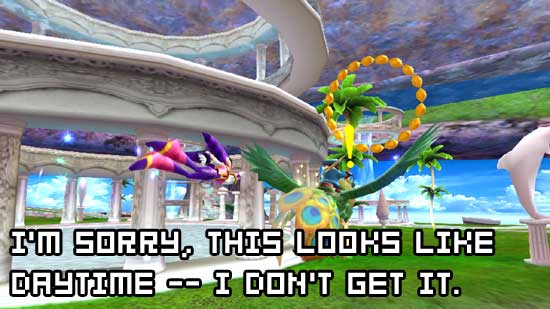 In a press released that shuffled its way towards us this morning, Sega has announced that the upcoming Wii sequel, NiGHTS: Journey of Dreams will feature a two-player mode and network support.

While we already know about one of the game’s duel modes, the release is devoid of any further information that we might need to know. Things like what two-player modes will be included, or how many Friend Codes we’ll need to simply access the multiplayer menu, for instance.

To distract us from the lack of information, Sega has also revealed that the Artificial Life (A-Life) feature in NiGHTS is making a return on the Nintendo Wii. Originally appearing in the Sega Saturn title, NiGHTS Into Dreams, A-Life lets players capture, raise, and combine Nightopians from the world of Nightopia. It’s kind of like Sonic’s Chao Garden, only with a pretty cool evolving soundtrack that changed depending on the mood of the Nightopians. Pretty music is pretty.

NiGHTS: Jouney to Dreams is scheduled for a Fall 2007 release.