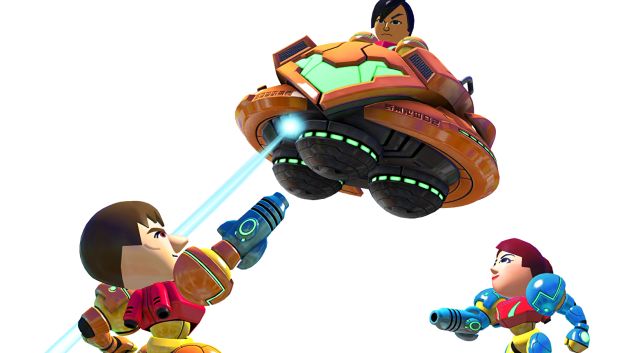 Blast Mii if you can

With only a few more months to go for the Wii U launch, we recently got a chance to check out the latest addition to the Nintendo Land lineup. A basic arena shooter, Metroid Blast doesn’t really capture the fun in simplicity like Nintendo Land’s other offerings.

Metroid Blast comes in two flavors, co-op and adversarial. In the first, players team up to take on waves of enemies, blasting them away to score point until the last one is gone. Mixing in some of the asymmetrical gameplay that Nintendo has been talking up, the player with the GamePad controls a hovercraft (modeled after Samus’ ship) shooting enemies from a birds eye view. On the ground players control their Mii with a Nunchuck, while using the Wiimote to aim and shoot.

While controlling the hovercraft works well enough, controlling your Mii with the Nunchuck can get a bit wonky. Whenever I had to aim high, or at any enemy that wasn’t level with my Mii, the camera had a tendency to act a bit crazy, making it easy to get turned around. Apart from this minor gripe, Metroid Blast just isn’t all that fun. Whereas Mario Chase is simple and fun, Metroid Blast is just too bland. You spawn in, blast some enemies, score some points, cut to the menu.

Things do get more interesting in the versus mode, though. Here, you and up to four other players have to team up to shoot down the player in the hovercraft. Versus mode also lets you play around with the Metroid staple grapple beam, letting you navigate the arena that much quicker. All things considered though, this is not one of Nintendo Land’s finer offerings.