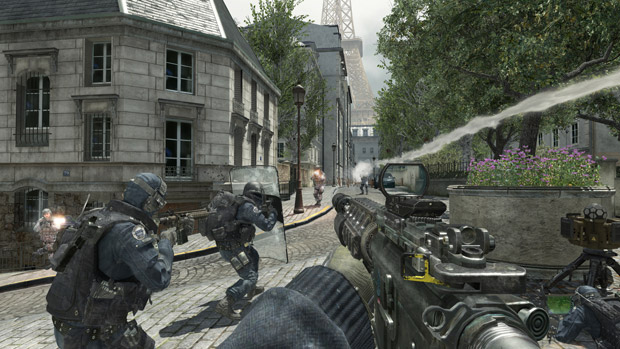 My hands-on time with Modern Warfare 3’s multiplayer was way too short for me to form a deep preview at this time, but I thought you all should know for now that IT’S REALLY FREAKING GOOD. Visually, the graphics are just so sharp, crisp, and clean now. There’s actually a lot more detail than previous games, especially in the environment. Don’t get me wrong — it’s not a huge leap, but definitely loads better than in previous games.

I’m sure they could have gone even deeper, but then that would have hurt the 60 frames per second and quick gun action we’re used to. Speaking of which, something about the overall game felt noticeably faster. It’s hard to explain exactly, I just felt my actions were being performed faster than that of, say, Black Ops.

I’m also digging the new weapon proficiencies concept. Basically, the more you use a weapon, the better the weapon gets. You’ll be able to adjust a lot of different features of a gun; exactly how and what is something I’ll try to find out at Call of Duty XP today.

Sorry, I know this is really quick impressions but I need a few more hours of hands-on to get a really good feel for Modern Warfare 3’s multiplayer. The overall core concept is the same as ever, but there are definitely lots of new changes that really refresh the whole Call of Duty experience.

This is a good as thread as any to ask your questions or let me know what content you’re looking to learn more about specifically in Modern Warfare 3’s multiplayer. In any case, know that I am loving what I’ve played so far.