When Square Enix told us that we would be seeing something new at PAX this year, I didn’t expect to see anything like Quantum Conundrum. What a nice surprise. Square Enix is working with Airtight Games and Portal creator Kim Swift on this, so all I had to go on was Portal. After meeting with Swift and seeing a demonstration I can tell you that while Portal influences are definitely there, Conundrum also moves into a cuter, sweeter dimension.

In this game you play as a kid that was just dropped off at your uncle’s house. Boring family weekend, right? Actually, your uncle is an inventor, Professor Fitz Quadwrangle. It seems he has gone missing in his own crazy mansion, and you decide to go look for him. Forget ordinary uncles or houses, though: both are nuts here. Fitz’s house is outfitted with all kinds of crazy test tech for him to prove his theories, and you’ll have to work through all of these physics-based tests to find him.

You’ll make use of your uncle’s wacky invention, the Inter-Dimensional Shift Device. This IDS can shift dimensions at the touch of a button, and you’ll use these shifts to change your world to solve some pretty clever puzzles.

There’s a lot of physics play, like in Portal, but the difference here is that the environment is changing with your shots. The IDS can do things like make heavy objects as light as a pillow by utilizing the Fluffy dimension, or help you access things on the roof in the Reverse Gravity dimension. There’s five in all; we were also shown the Normal and Slow Motion dimensions, but the fifth remained under wraps for now. 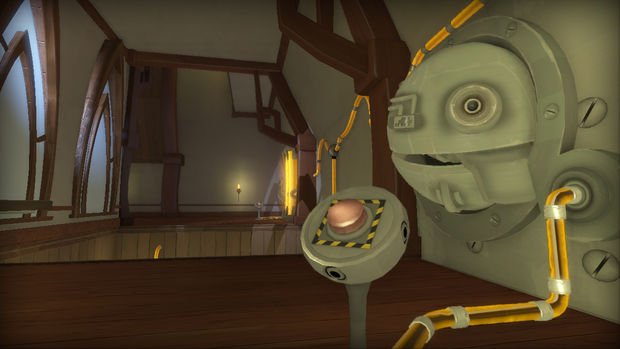 One of the best examples that used many of the game’s revealed dimensions had the player changing a heavy safe into a fluffy, light one, so that it could be lifted. The safe was then thrown forward, and then switched back to its original, heavy state while in mid air. From there the player switched to the Slow Motion dimension, where time passes 20 times slower. While in slow motion, the player jumped onto the flying safe and then switched back to the normal dimension, riding it until gravity began to take over. From there he alternated between the normal and Reverse Gravity dimensions, falling and rising alternately, to ride the safe across a wide pit to sort of fly across to the other side safely. 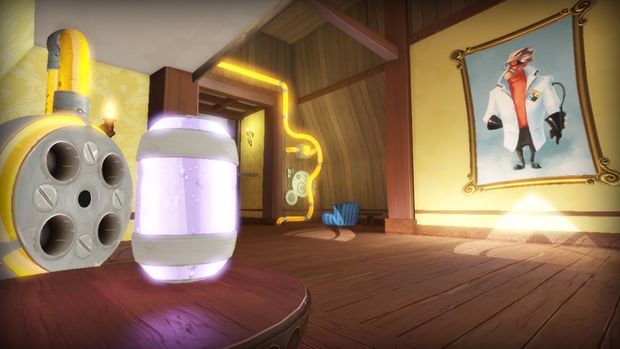 It’s not another Portal, but you can definitely feel the influence. The dimensional angle is a different direction, for sure. The cuter, more cartoon-y art style and fun environment seem to be aimed at a broader audience. Don’t let Conundrum’s charming looks fool you into thinking that this is something a bit more simple, though. The demonstration Swift gave us proved that this game could be every bit as complex as Portal — maybe even more. You’ll still need to wear your thinking cap, but you may smile more with this one.

Look for Quantum Conundrum on XBLA, PSN and Steam next year.