I never thought I’d play Rise of the Triad multiplayer again, and I especially didn’t imagine I’d be playing it at QuakeCon with others right beside me. It’s a surreal thing but Rise of the Triad is coming back thanks to some loyal fans at Interceptor Entertainment and a reformed Apogee Software. Though I only got to play a pre-alpha build for a couple rounds, I got a good sense of the direction that this reboot is taking.

Yes there are jump pads and Excalibats, but there are new additions as well.

The reveal of Rise of the Triad (2012) didn’t go exactly as planned. The info leaked out earlier in the day from a promotional Twitter account for the game, the reveal was pushed back two hours because of QuakeCon scheduling, and when the trailer was finally shown it was missing sound. Even worse, the reveal barely got a round of applause from the audience. This is to be expected though because ROTT isn’t Doom or Fallout. It’s a weird obscure game that only meant something to a few PC gamers in the ‘90s, but it meant a lot. Interceptor seems to be aware of this and is trying its best to make a worthy reboot.

ROTT runs on the Unreal Engine 3, but it feels closer to Quake III in play. It’s furiously fast in comparison to modern shooters, including arena shooters like Nexuiz and Quake Live. The inclusion of jump pads and the small scale of the maps only makes things more hectic. There aren’t many games that play at the speed of ROTT, but that’s not necessarily a bad thing, especially when no one else is filling this niche.

The map I played on took place in a dingy, grim looking castle, including a dungeon with malnurished inmates and a courtyard for long distance rocket firing. The outdoor space was filled with jump pads. Some would shoot you up to a second level, giving players a good spot to camp. Others would throw you across the map for a quick getaway. The map is filled with tight corridors that lead to some intense rocket exchanges, but it doesn’t exactly make me feel nostalgic. The map is also horribly lit, with many areas being not far from pitch black. 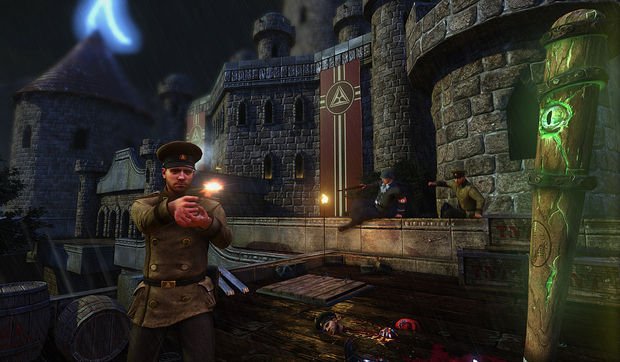 The original ROTT wasn’t exactly a colorful game, but this reboot is in desperate need of some more lively art direction. The Wolf 3D engine and character models taken from photos of actors gave the original ROTT a lot of personality that the Unreal Engine 3 doesn’t bring on its own without some much needed modification. Then again, I may find that necessary element in the single-player (preview to come). Even so, there is a lot of technical issues with this multiplayer demo, including weapons magically disappearing from my inventory and weapon models not immediately showing up. Again, this is pre-alpha but it didn’t exactly make for a strong first impression.

The comparisons to Quake III doesn’t stop at speed, tight corridors, and jump pads. You’ll also be dealing with a LOT of rockets. The demo map included two rocket launchers (one heat-seeking), an MP-40, and the legendary Excalibat. The pistols — pick-up an opponent’s pistol for akimbo — and MP-40 can be fired via ironsight by hitting the right mouse button. This is an interesting feature to include in such a fast, frantic arena shooter. I didn’t end up using it that much, but I appreciated its inclusion, nonetheless.

Being thrown through the air by a jump pad and firing rockets at the ground below never gets old, but it’s all about the Excalibat. Not only is the Excalibat ridiculous, it’s also pretty versatile. It makes for a great melee weapon and a powerful long range weapon thanks to its alternate fire that shoots off exploding fireballs. There is also the Firewall gun but I never saw it — though I got killed by it a number of times.

ROTT multiplayer is kind of what I expected it to be. It’s a fun and chaotic arena shooter that has gone out of style over the past decade. The uninspired art direction and buggy presentation didn’t leave a strong impression, but I have faith that Interceptor will be able to polish the game before its release later this year. If nothing else, it will make for a fun couple nights of drunk, nostalgic gaming.