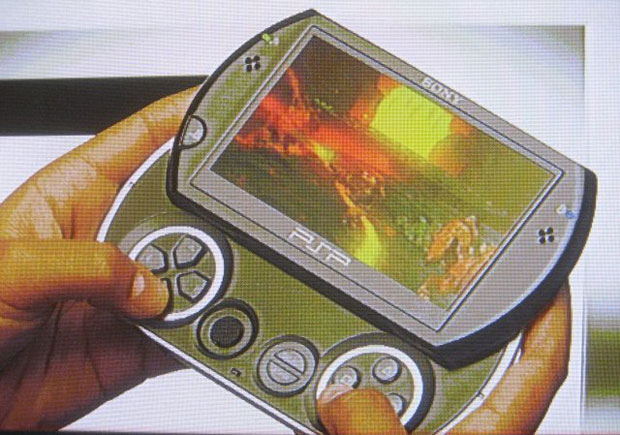 Above you supposedly have your first look at the PSP Go, Sony’s rumored new handheld that we told you about back in March.

This according to Gaming Console Network who has claimed it received the June 2009 issue of Sony’s digital magazine Qore a bit early. While they’re not the best images (they’re said to be snapped from a camera off of a television), what we do see jives with what we’ve been hearing — thin like a Blackberry, sliding screen… and no UMD drive.

According to GCN, the episode confirms 16 Gigs of internal memory (our rumors suggested there would be two SKUs, one with 8 Gigs, as well), and a memory slot for more. No price has been announced, but the unit is said to ship in Fall of 2009. The episode reportedly also mentions that the Go will not replace the PSP 3000 on retail shelves; I seem to remember Nintendo saying that about the DS Lite less than a year before they stopped shipping them to retailers.

Another bomb — the long-awaited Gran Turismo PSP is set for an E3 2009 reveal. Will it only be available as a digital download, as a way to push PSP Go sales and the new direction of the handheld? If these images and information pan out, we’ll know more next Tuesday.

[Update: Yanking the “rumor” from this one, as we’ve seen the episode of Qore in question with our own eyes. Sony’s John Koller gives Qore’s Veronica Belmont a run down of the new handheld, while also revealing that a new Metal Gear game is on the way, along with the aforementioned Gran Turismo.

You can see the world’s crappiest YouTube video of part of the segment in question here. Thanks, fadecy!]

[Update 2: Another YouTube video, with better video quality, found after the jump. The audio could use work — it crackles and is out of sync, so when Veronica opens her mouth, Koller’s voice comes out. Totally frightening. But you get the idea. Thanks, electrolemon.]