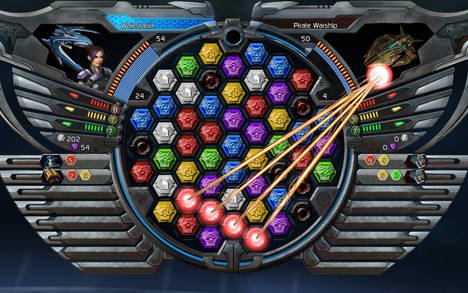 D3’s Dorks, Dealers and Double-Ds party last week had prostitutes, gambling and crack — The crack being Puzzle Quest: Galactrix for the DS and PC. There were multiple stations of each version of Galactrix at D3’s party for people to try out by themselves or head-to-head against each other in multiplayer. All versions of Galactrix are the same in that they share the same story and gameplay. The only difference is that the DS version isn’t as animated as the PC counterpart.

Yet when I played the DS version, I just couldn’t get into it. The limited graphics really just killed the fun for me, which I fully don’t understand why as it’s such a minor issue. It’s a puzzle game after all, so something like graphics shouldn’t even be a problem. I guess all the flashing colors and special effects from the PC version have spoiled me.

As for the PC version, you already know what I think about the game. If you’re still on the fence about it, just go try out the one level flash demo or the full demo for yourselves. If you still don’t like it, then you’re a horrible person that doesn’t like fun … or crack.

Puzzle Quest: Galactrix will be out on February 24 for the DS and sometime early 2009 for the PC, XBLA, and PSN.