Most core gamers saw Microsoft’s Kinect sensor and scoffed, dismissing out of hand its potential for use in anything but kids’ games and casual experiences. The people at EA Tiburon, however — having already implemented precise motion controls for their Tiger Woods PGA Tour titles with Wii MotionPlus and PlayStation Move — saw a chance to make their golf videogame more realistic than ever before.

I discussed Tiger Woods PGA Tour 13’s Kinect support with executive producer Brent Nielsen at a recent EA press event in New York. Kinect’s cameras are able to track an entire body, and that gave Tiburon an idea: “Instead of just simulating the swing of a club […] we thought, ‘You know what? We actually have an opportunity to simulate the full golf swing.’ Because the golf swing is not just about the club in your hand; it’s your hips turn[ing], your shoulders, it’s the [swing] plane, and how your hands come through.”

Tighten up your swing, amateurs. You wouldn’t want to look silly in front of Kinect. 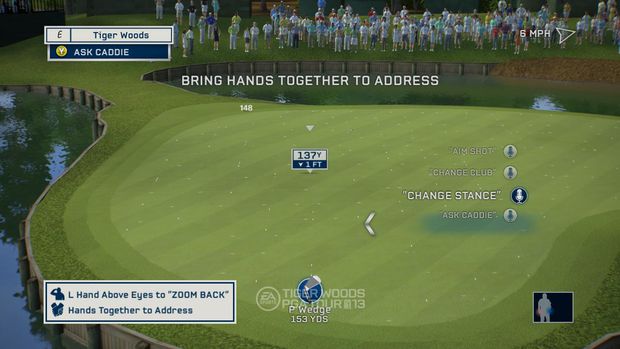 Tiburon has been contemplating Kinect support for Tiger Woods PGA Tour since before the peripheral’s debut in November 2010. But a couple of important considerations prevented them from implementing it until this year. For one thing, the studio “wanted to make sure that Microsoft was far enough along in advancing their [Kinect] libraries,” Nielsen explained, referring to the software side of Kinect upon which developers build their games.

In addition, Tiburon had to work with a compressed development period for Tiger Woods PGA Tour 12: The Masters; EA had moved up its ship date from the series’ traditional mid-summer release to the end of March, so it would coincide with the Masters Tournament. “We wanted to make sure that we had the full cycle to do the proper R&D, to investigate the different types of things that we wanted to do to capture that golf swing. And we’ve spent basically this entire year working on that,” said Nielsen. 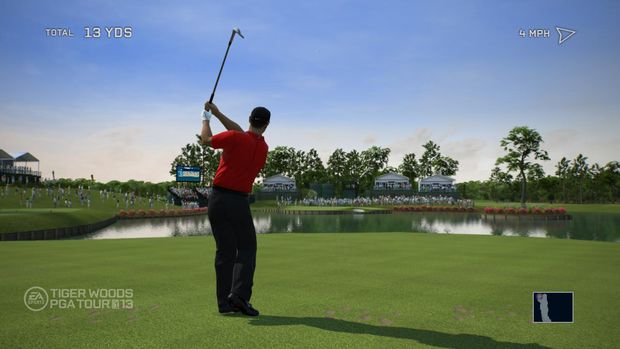 The fruits of their labors are impressive: PGA Tour 13 boasts full Kinect support, and in-game voice functionality to boot. The only thing you can’t do without a controller is aim the club’s sweet spot at a specific point on the ball. Otherwise, the whole game is Kinect-enabled, with gestures that mimic a golfer’s actions in ways that I occasionally even found amusing. Unlike the setup on Wii or PlayStation Move, you don’t swing toward your TV; since Kinect has to track your entire body, you stand with your feet pointing ahead, and swing across the screen from right to left (or left to right, if you’re a lefty).

Here’s how you might play a hole on Kinect. Before taking your tee shot, you say “aim shot” out loud, then hold your left hand to your brow — as if to block the sun’s rays while you squint into the distance — to zoom the camera to the general landing zone. Here, you hold out your open left hand, then close it into a fist to drag the aiming reticle around. Once you’re satisfied with the location, you clasp your hands together around your invisible golf club and swing away. (Psst… If it’s more comfortable, you can actually play the game with a real club in your hands. Microsoft won’t tell you that, since their marketing for Kinect hinges on the device obviating the need for any extra peripherals, but don’t let them stop you.)

After your drive lands safely on the fairway, you look to switch to an iron for the approach shot. “Change club, 5-iron,” you tell the game, and proceed to send the ball flying toward the back of the green. But the pin’s near the front, so you point your fist at the bottom of the screen to put backspin on the ball in mid-air. Once the ball’s on the green, you crouch in front of your TV to check the lie of the green. Now you’re ready to putt — but everything’s riding on a birdie here, so you ask the game for a “putt preview” to check the ball’s path before proceeding. With a smooth, controlled motion, you sink the putt; your only regret is that Kinect doesn’t render your triumphant fist-pump in the game. 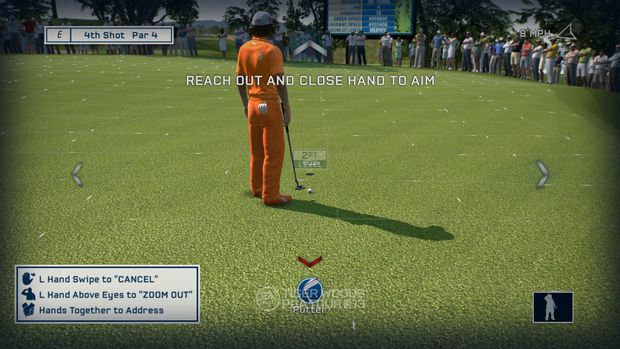 I found the experience’s fidelity remarkable. On the higher difficulty levels, Kinect translates your entire body’s movement to your on-screen golfer’s swing. Rotating your hips and arms too far will send the ball off course; overextending your backswing or swinging too quickly will add too much power to your swing when you might have been looking for some touch; a herky-jerky, stuttering motion will provide less reliable results than one with a smooth cadence. As you swing, you’ll see the same trail that shows up when you play PGA Tour 13 with a controller — a visual cue that offers feedback on your motion.

The motion controls gave me very little trouble. After a quick tutorial from Nielsen, I followed the copious on-screen prompts and managed to birdie the first hole I played. The aiming mode sometimes held on too long, failing to detect when I had opened my fist to signify that I’d finished moving the cursor. Other than that, the game never felt unresponsive or did anything I didn’t want it to do.

According to Nielsen, Kinect’s machine learning technology made that possible. “We [got] six-year-old kids, adults, big, small, tall — all shapes and sizes — and we had them record their swings, gestures, putts, chips, [and] full swings,” he told me. The developers tagged that data, and used it to teach Kinect to differentiate between golf swings and other motions. “When we first started doing it,” said Nielsen, “you could do a baseball swing, and it would hit [the ball].” That’s not the case anymore. 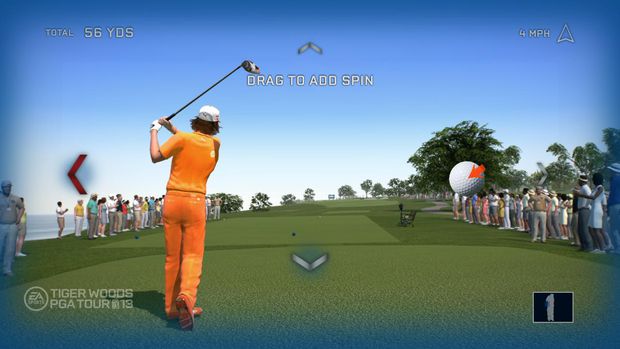 Golfing isn’t the only place where Kinect comes into play. Tiburon has redesigned the game’s menus for Kinect, taking cues from Harmonix’s Dance Central interface and the PlayStation 3’s XMB, so you almost never have to pick up a controller. You navigate tabs to the left and right, scrolling up and down through options within tabs. A right-hand swipe to the left selects, while a left-hand gesture backs out.

I had a modicum of skepticism about the Kinect functionality in PGA Tour 13, but once I played last year’s iteration with PlayStation Move, I figured Tiburon knew what they were doing. After trying Kinect with this game — the peripheral’s first-ever sports simulation title — I won’t soon doubt the studio again.