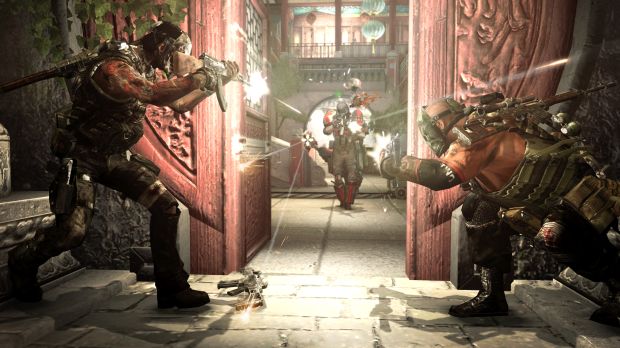 You know, I’ve been looking at Army of Two: The 40th Day for about six months now. After an initial preview, followed by another hands-off opportunity at E3, as well as a solid play through of the first level of the PSP version, I’ve been able to get a pretty good idea of what Army of Two: The 40th Day is going to offer. Just, you know, I haven’t had a chance to play the damn thing.

The first thing you’ll notice when you boot up the multiplayer mode of Army of Two: The 40th Day is that the multiplayer options have been increased exponentially. Original versus mode Warzone is back, but it is no longer the 2v2 deathmatch mode, but rather a 12-player mode. While I am mostly unfamiliar with the original version of Warzone, I am well aware of how it functions, and this update is startlingly bizarre. The changing objectives are just that much more chaotic with the increase in players.

The team-based mechanics of the single player are still in place, so you can restock from your partner, heal up, and make last minute saves, but it all spread out over large battlefields based upon ruined locations in Shanghai, such as a zoo or a shopping area. Teaming up with your buddy to pop shots over the corpse of a hippo is strangely satisfying. The goal is to follow a series of changing objectives and beat out the other team. It is actually much faster than I expected, and you  have to be careful for sneaky opponents coming up from behind for a kill. Killzone players should have a very good time with this mode as the changing objectives (VIP, Destruction, Assassination, and Infiltration) keep things interesting.

Co-op Deathmatch is one of the new modes in the game. Six teams of two duke it out in a deathmatch, and it plays out just like you would suspect over the six levels. However, instead of two teams of six, it is six teams of two. And like Warzone, it is very fast for a third person over-the-shoulder shooter, so gamers should expect to work hard on tuning their reflexes. Talking to Eric Chartrand, the Lead Designer of Multiplayer, I found out that if you just split from your partner, you’re going to be dead pretty quickly. Stick with your buddy, and you’ll always have someone at your back.

However, one thing that concerns me is how there is so much going on. It doesn’t seem like a problem with the amount of players, it is just there are so many damn teams. Unlike a traditional versus mode, where it is 1 versus all or whatever, a mode like Co-op Deathmatch is teams of two versus all. That means, if you are really good, and your partner is really bad, tough it out buddy, because you ain’t going to win. It’s very fast, and the chance of dying seems to be really high. You have got to communicate to your partner, because there are ten other players who really want to make sure you stay dead. Interesting? Yes. Will people like it compared to other types of deathmatch modes? Let us see.

One more traditional “new” mode, Control, is a team based Capture the Flag with two teams, TWO and FDI, working against each other to gain the most points. There is a pole in the middle and the two teams compete to control the pole and defend it to score points. Fairly simple stuff. Actually, it is probably the most recognizable mode in the game, and fans of this sort of multiplayer will probably be most comfortable here.

The final mode, Extraction, is basically Horde from Gears of War, with four player co-op against rising waves of enemies, with four maps to choose from. A group of journalists and I worked to get through the entirety of the zoo level, and while the initial zones were easy enough, by the fourth area we were getting crushed by enemies with rocket launchers. Communication was really key, as one of us would die, and another would try to save him and get shot in the process. Like Horde, things can ratchet up really quickly, so communicating with your partners is very important. Apparently we can’t communicate very well. Oops.

Army of Two: The 40th Day looks really nice. Things have not changed negatively since the last time I saw this game, and the multiplayer keeps the tradition of looking good. The maps are particularly large and fluid, and the whole destruction theme of the single player has moved over into multi, as each level looks like some serious s**t went down.

One neat little feature I liked was how the bullet trails for different teams would match their team colors. This was helpful for a couple reasons, as it made it easier to see what team was shooting at you, especially in the 6-team Co-op deathmatches, and it also gives an opportunity for purple garbed muscle heads to shoot you with fabulous purple bullets, a humiliating sight to behold. While it is not an overblown effect, it can make modes a little too polychromatic, and Chartrand confirmed that this feature might be taken out.

Something to expect in the third Army of Two multiplayer would be the inclusion of customized weapons in multiplayer. I asked Chartrand about this, and while it is something that they would love to include in the future, don’t expect diamond encrusted Uzis this time around. DLC, like always, should be expected, and generally the multiplayer in Army of Two: The 40th Day has received a lot more attention than in the previous game. Don’t expect this to be an afterthought.

So what do I think? It looks cool, actually. I’m a little concerned that there just might be too much going on, especially in the Co-op Deathmatch, but I certainly had fun with it. Besides, the peppy speed of the game was surprising and appreciated, and the cooperative elements of the game made sure you are constantly interacting with a team mate. Certainly an interesting game to look forward to for the post holiday blues.