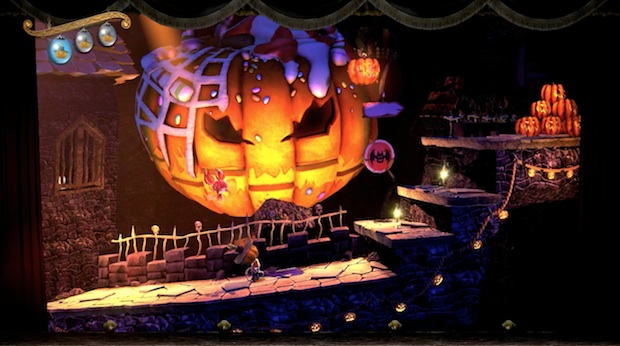 No, that’s not a typo

Check out the world of Hallowee Ville, from upcoming PS3 game Puppeteer. I had to look at the name two or three times to make sure that I wasn’t crazy. It’s like one of those mind-bending visual tricks that makes you see something that isn’t there!

While beautiful and charming, Puppeteer is also kind of spooky, so this new trailer is perfect for Halloween. In it you’ll see a pumpkin-headed Kutaro (he uses interchangeable heads) using his magical scissors to chop away at a world full of huge, pop-out Jack-o-Lanterns, laughing ghouls, and zombie hands that seem to be ‘raising the roof’ in a Halloween-themed dance. Later, see what looks to be a giant candy-headed Jack-o-Lantern that might be barfing frosting. And that flying skeleton with the glowing lungs looks to be a jerk.

I cannot wait for this game. It’s coming sometime next year — hopefully before Halloween.