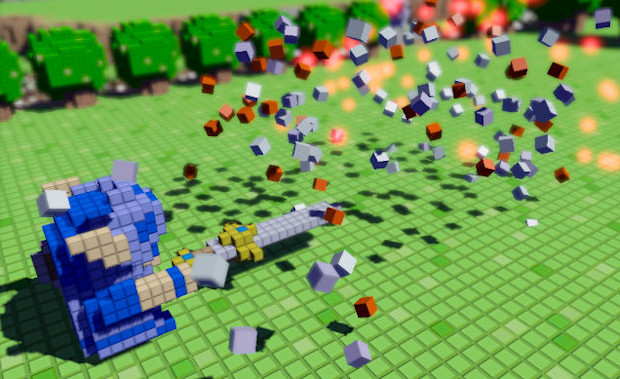 At the beginning of the week, I promised that I’d make it my mission to find out about the Western release of 3D Dot Game Heroes, the brilliant looking action RPG that Zelda copied everything from. My first stop was to chat with Sony, since the game’s a PS3 exclusive, and I was told that there was publisher buzz around the project at TGS, although no confirmations were able to be made.

So, I decided to hit up the usual suspects, the publishers who would most likely be localizing a game such as this. I’m sure you can guess which publishers they are, but if you haven’t, they were NIS, Atlus and XSEED. The latter is yet to respond, but the others were more than happy to comment.

“3D Dot Heroes is indeed a very interesting and amazing game,” states NIS. “Actually, we have been asked by some other media about this game. At this moment, we do not have plans to release this title, however, we would love to do so if the opportunity arises.”

I also asked Atlus’ PR department, forgetting that I once said an Atlus rep sounded like Scooby Doo. He did not forget, and his first response was “ROOBY ROO?” When I then stated how much I hate getting my comeuppance, Atlus’ Aram Jabbari very kindly answered, stating that he knows nothing of a Western release, but that he’d “love” to see it come Westward.

So, early investigation seems to indicate that nobody has openly made a move for the game, but that people are very keen to see it come this way. I think that pretty much confirms the inevitability of somebody publishing the game in America, but I shall not rest until I get an official launch announcement in my grasping talons.