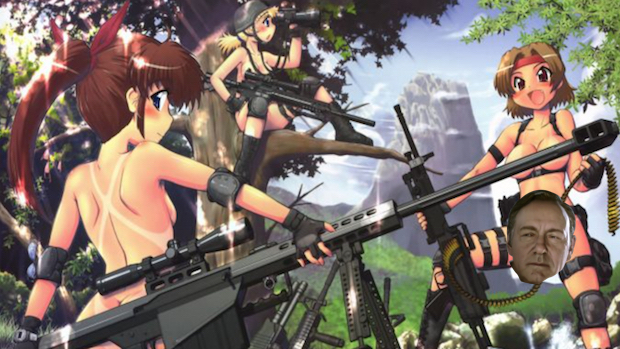 On July 15, gamers in the U.S. and Europe will get their hands on the highly anticipated first-person shooter The Kill Squad. The title, developed by Gunner Games, will also see a release in Japan but players there will have to wait a little bit longer after its Japanese publisher, Kodako Games, announced it would be reverse-censoring the game to really tramp it up for its audience.

“This game is far too modest for consumers in Japan,” Kodako Games director Yoshi Otori said in an interview after plans for The Kill Squad were announced. “Where are the panties? Where is the zettai ryouiki? Where are the giant breasts? These are all questions our potential audience will ask and we need to have answers for them.”

Otori detailed some of the changes that will be found in the Japanese release, the biggest of which will happen right at the start of the game. In the first chapter of the game’s story mode, the eponymous Kill Squad, a group of grizzled male soldiers, is involved in a helicopter crash. That crash is still a part of the Japanese release; however instead of waking up to find themselves surrounded by the enemy, the now 18-year-old female heroes of the reverse-censored version will awake to find all but a single thread of fabric has been burned from their bodies and they’re all suffering from amnesia. These types of changes, Otori says, will help the game avoid the dreaded “A” rating.

“A modestly dressed female with a sensible breast size is a death knell for these types of videogames in Japan,” Otori explained. “Nobody wants to buy them and no retailers want to stock them. That’s why we must make all breasts bigger and the butts bigger and guns so big that the girls don’t shoot them as much as they straddle them seductively.”

Since the announced changes, many in Japan have taken to the Internet to express their disappointment in Kodako Games for not going far enough with the reverse-censorship. Several dozen people are threatening to boycott the game until the publisher adds in at least three steamy bath scenes and a mini-game where each member of the Kill Squad take turns licking the sweat off of one another.