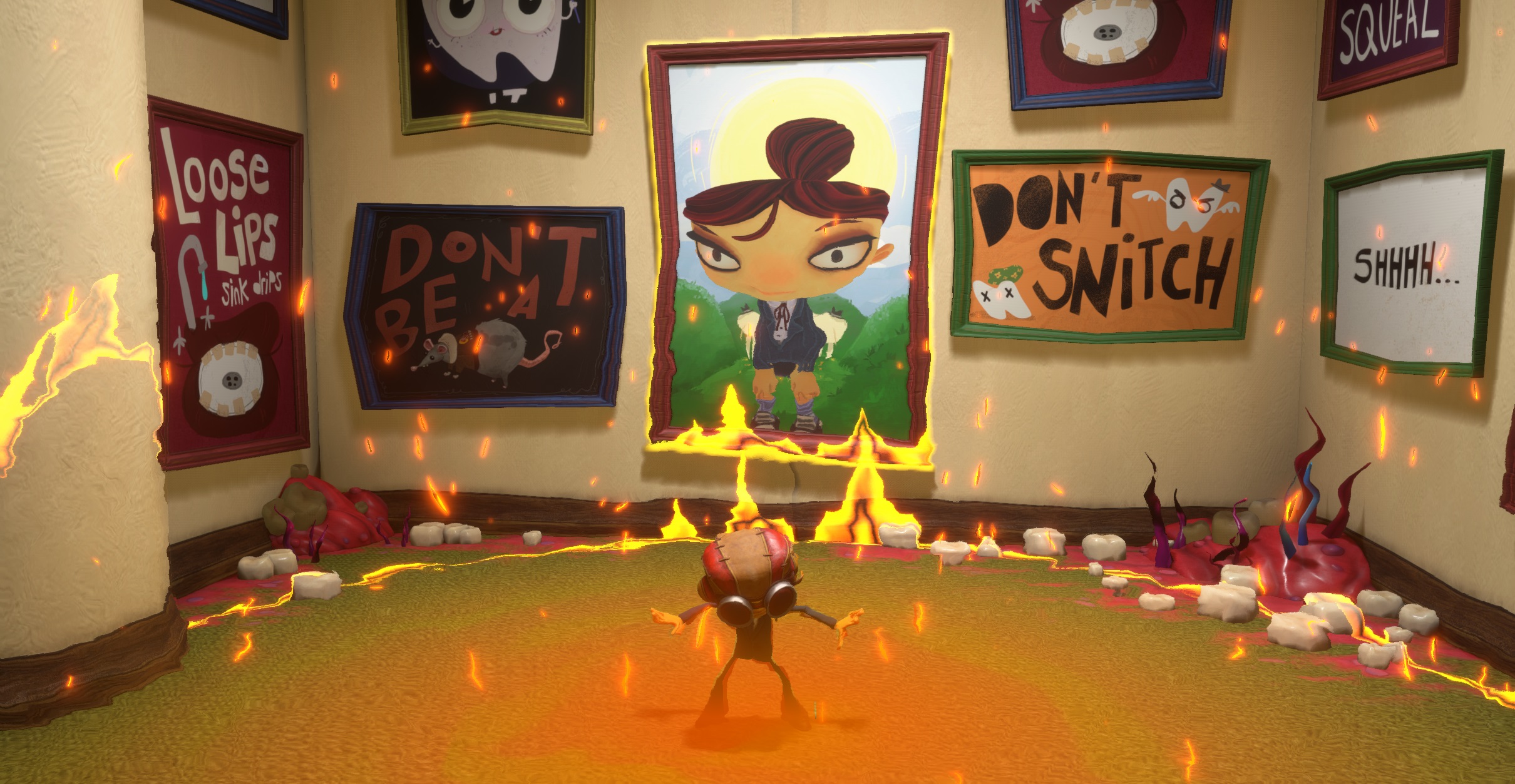 The story of Psychonauts is one of the happiest underdog stories in recent memory. The original launched to critical acclaim in 2005 but underperformed so badly that plans for a sequel were scrapped fairly early on. The relative failure of the game forced publisher Majesco to step away from video games for a few years. While Tim Schafer and his team at Double Fine would produce games in the following years, it seemed like a continuation as Raz’s story would never come to light.

Eventually acquiring the publishing rights for the original, the future of Psychonauts 2 became a little brighter. The first game was put up for sale on digital distribution platforms and started to sell quite nicely, which sparked hope for the sequel. Then, a bone got thrown Double Fine’s way. Kickstarter, a crowdsourcing website, grew in popularity and showed that average people were willing to throw down money for games that looked to recapture the glory of their youth. After a massively successful campaign for Broken Age, Double Fine realized that Psychonauts 2 could become a possibility in this modern era of indie development.

Enter Fig, a platform launched in 2015 as more of an investment source than Kickstarter. The premiere title for this platform was Psychonauts 2, the long-awaited sequel to the plucky, darkly intriguing action platformer. Another smashing success of crowdfunding, Psychonauts 2 was quickly funded and is now nearing release after four years of development. Thankfully, that time spent in gestation seems to have paid off as the E3 demo I saw had some remarkable levels of polish. 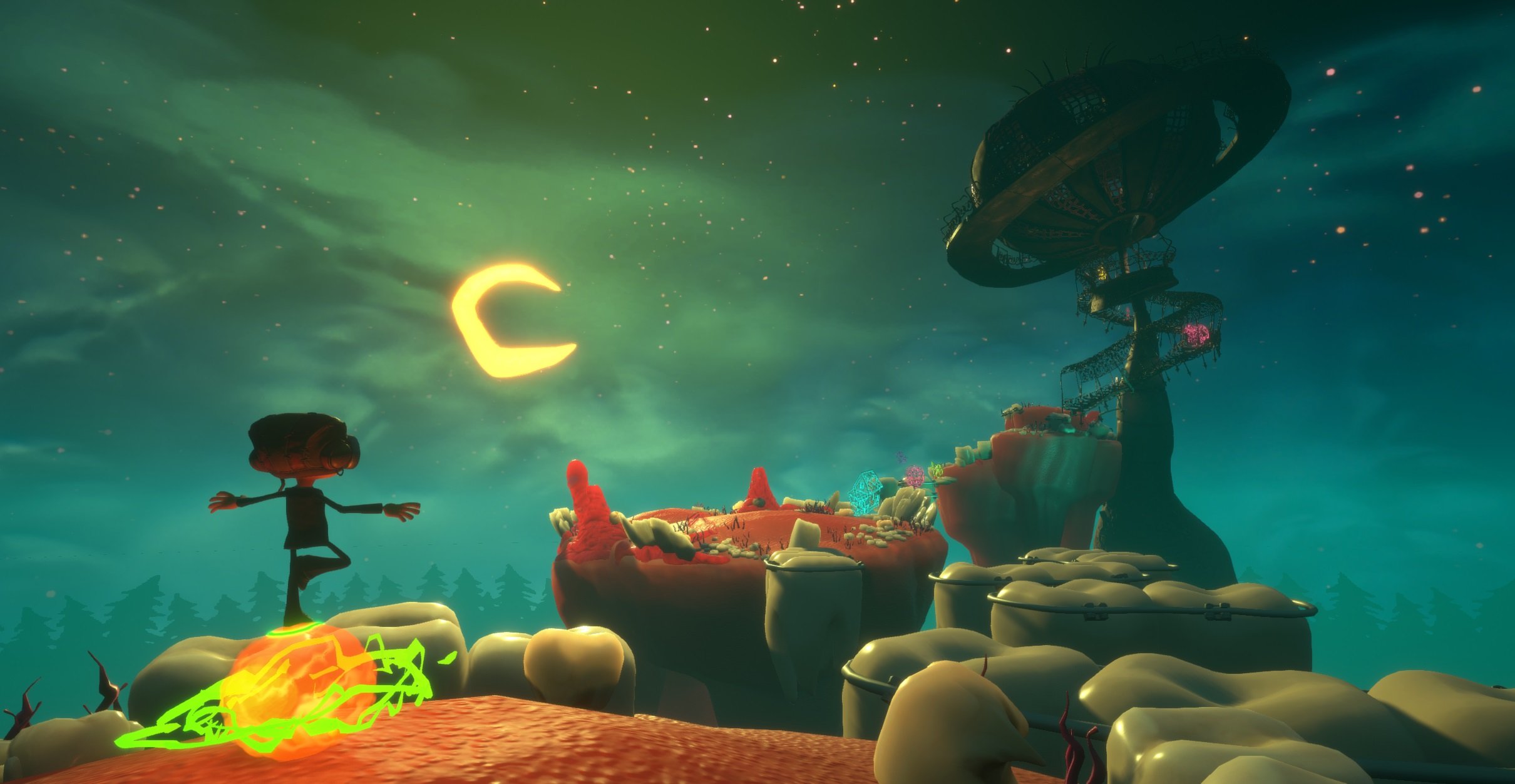 In a behind-closed-doors demonstration, a bunch of other media and I were shown the introduction level to Psychonauts 2. Taking place directly after the events of the VR spin-off Rhombus of Ruin, the game sees protagonist Razputin and the Psychonauts going into the mind of Dr. Loboto (one of the antagonists from the original) to discover who he is working for. A series of humorous events unfold in an appropriately dentistry themed level.

Starting with a panning shot over a bunch of office cubicles, it looks like one of the central themes of Psychonauts 2 will be realizing that life isn’t always what you thought it would be. Raz, clad in a suit and tie, confides in his girlfriend Lili that working for Psychonauts wasn’t exactly how he imagined. He figured there would be more action and danger instead of being cooped up in an office all day. While not an original storyline, it could be seen as an echo of the development troubles that Double Fine had in making this title.

After that bit, we pan into a boardroom where Dr. Loboto is given the “Employee of the Month” award. Not catching on to the fact that this is a ruse, Loboto becomes confused when asked to get his boss to sign off on the planned vacation he has won. A little bit of stealth later and Loboto finally realizes something is up, to which the demo shifts into a sequence resembling the original Psychonauts. 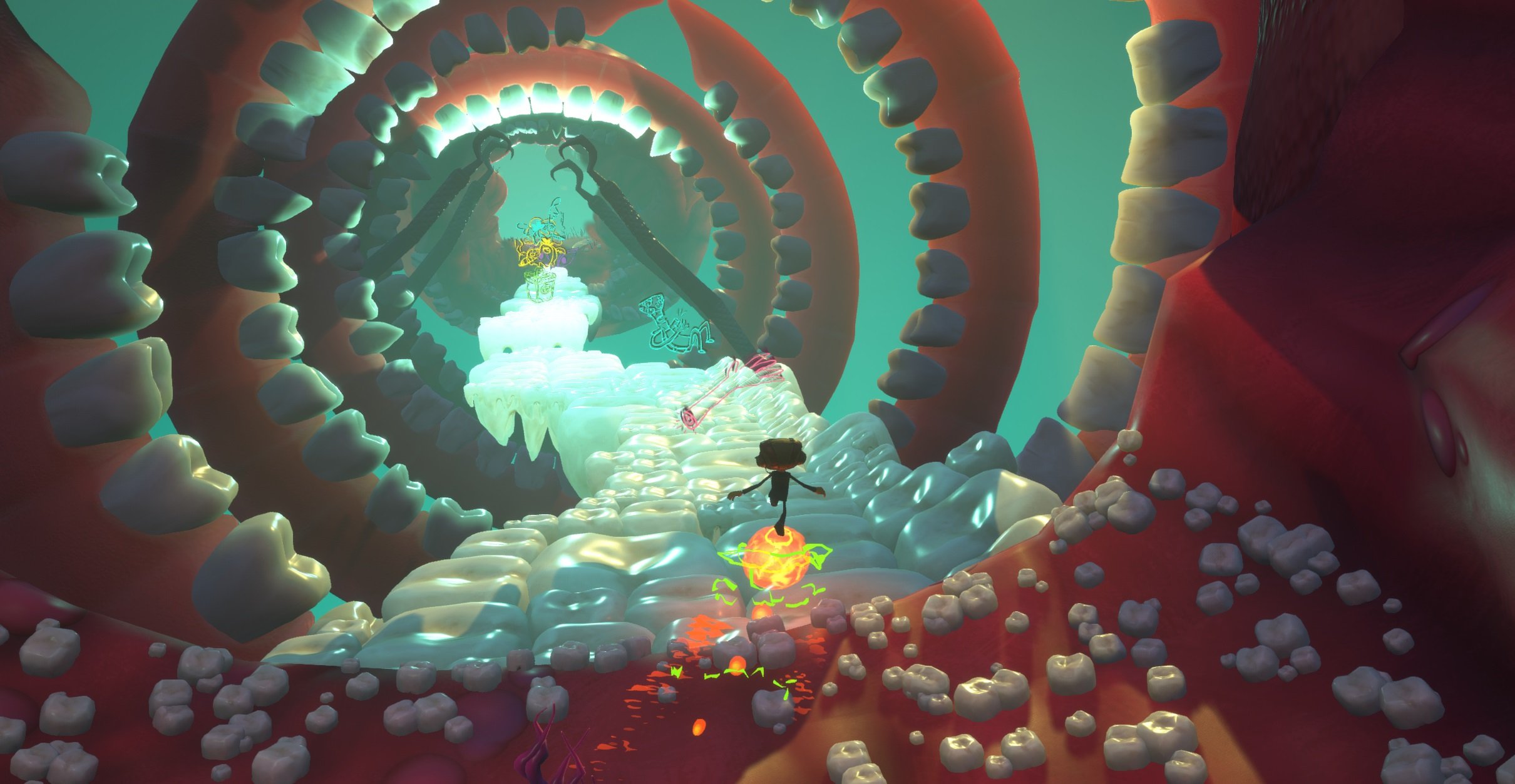 Even without seeing a lick of gameplay up to this point, the visual design of Psychonauts 2 is incredible. With a lot of crowdfunded games, the meager budgets usually result in an understandably low-rent look. Since Double Fine opted to seek additional funding beyond the Fig campaign (which was disclosed at the time of its launch), Psychonauts 2 ends up appearing like a traditional high-budget title. I wouldn’t go so far as to say there is a claymation style here, but it does look like a fully realized video game version of a Tim Burton film.

Character models have dramatically higher polygon counts than the first title, but retain their angular designs that artist Scott Campbell originally envisioned. The environments are lush with detail and have an impressive amount of moving parts, but aren’t going for realism. You can tell this is animated and it looks very distinct, warm, and colorful.

Getting into what the gameplay looks like, everything appeared just as I remember it from the first Psychonauts. Raz still has the extended hand attack, can summon his ball to roll around on, and can float through the air. The attention to detail in recreating those animations is nice and makes the game feel like a real love letter to what people enjoyed about the first. It also looks to have that same gameplay flow that the first game had, which should satisfy fans. 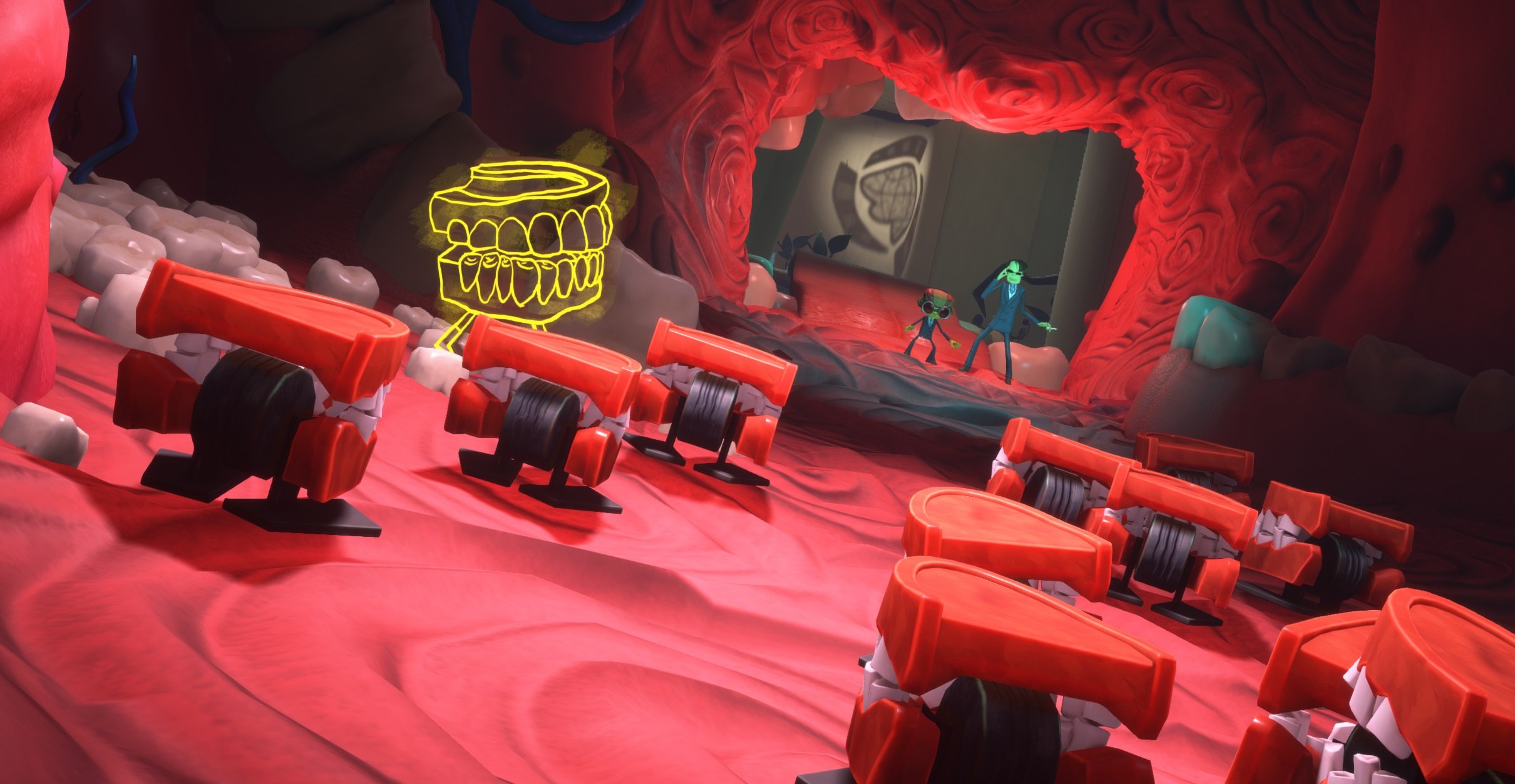 I was more impressed with how organically the tutorial was integrated into the level. While not everyone is going to remember all of the ins and outs from Psychonauts, the sequel doesn’t beat you over the head with incessant prompts or constant reminders. Some quick tool-tips pop up on screen and you can actually utilize all of Raz’s abilities from the start if you know them. Since Raz was caught off guard by Loboto’s sudden discovery of their plan, he actually forgets things in the heat of the moment and other characters give him a quick reminder of his skillset. It sounds great and lets the writers flex some of their comedic talents at the same time.

I also got a look at how Raz’s powers have been improved from the first title. In the original, using telekinesis to move objects was mostly static and scripted. Psychonauts 2 introduces the ability to move objects at will, playing with physics more than what was possible before. I’m not sure if you’ll be able to circumvent parts of levels by coming up with impromptu solutions, but there appears to be more flexibility in puzzles than before.

The jokes, as well, seem sharper. Comedic timing is more graceful thanks to this new engine making animations look less stilted. The voice actors sound more comfortable in their roles, which allows you to get a better grasp of how they are thinking about the situation. Even the enemies throw insults at you that don’t repeat on loops, which does wonders for creating a believable world. Everything seems to be majorly improved on from the first. 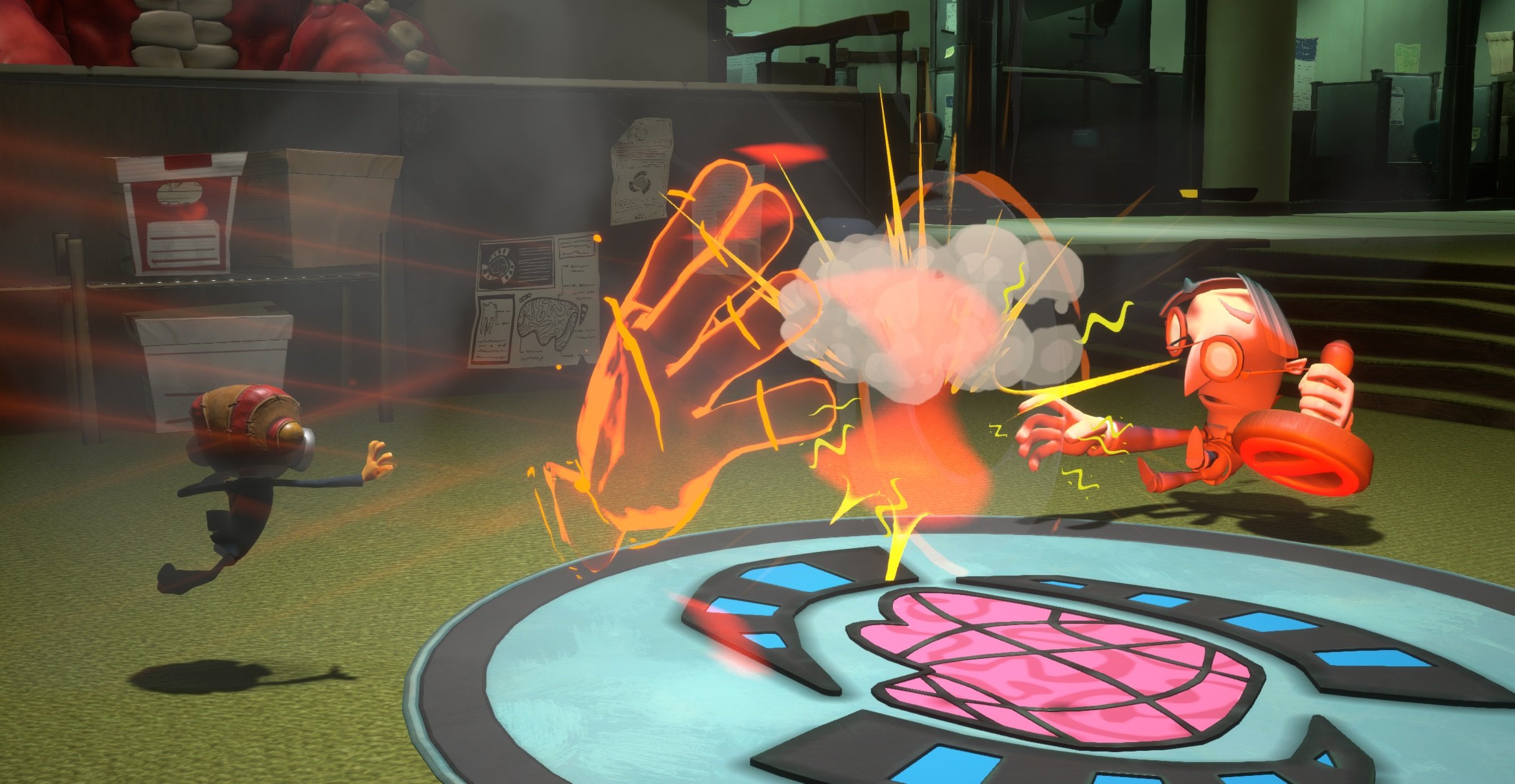 Apart from inferring all of that, though, there wasn’t much else to really go on for this demo. Without getting hands-on time with it, I can’t say for certain how everything will feel. The level itself was not anything new, but something shown to backers of the project. You can even watch the official trailer and catch glimpses of what I saw, just in shorter form.

With a launch planned for sometime next year, it makes sense that Double Fine wouldn’t have much else to present. While I doubt this is the only level currently finished, I get the feeling that Double Fine is trying to avoid having spoilers running around the internet for everyone to mistakenly click on. I personally don’t think knowing more would ruin the surprise, but I can understand how people that have been waiting 14 years for this game would want to go in completely blind. Sometimes pre-release hype can spoil an otherwise solid game, so I can’t fault Double Fine for playing it safe.

The demo ended with a tease for the real menace behind Dr. Loboto’s plan and then we were ushered out of the room. I will say that I had a pleasant time seeing how Psychonauts 2 has progressed, but I can’t make any conclusive statements about the gameplay. If you were worried that all of the hype might be for naught, at least you can now rest easy. Psychonauts 2 seems to be progressing nicely and should be everything that fans have wanted for the better part of two decades.