GameStop has come out declaring that 2008 is the year that they start to appeal more to the casual gamer. To quote Daniel DeMatteo, Chief Operating Officer of GameStop, “Honestly, we are having to retool the way we think of things in our stores in terms of merchandising, layout and also customer service because it is no longer only the hardcore gamer walking in who knows exactly what he wants.”

Funny, I was in a GameStop yesterday buying some games, and the same thing crossed my mind. I was so compelled by my experience, that I wanted to write about it even. However, after going through their recent comments to the media, I believe GameStop’s solution is missing the point. If you stand in the middle of a GameStop store for 15 minutes, you get a pretty good idea what they need to do to make the shopping experience better. Because that’s what I did.

Hit the jump for my take on all this.

1. Too many games on display!

I have never been in a GameStop where it didn’t look like there were just way too many products on display. It’s overwhelming. Too many displays, too many games, too much of everything. It’s like a high school kid who has decorated his room over the last five years, and covered up every single inch of space with some sort of poster, sticker, or toy, that is an expression of himself. It’s just too much.

The stores definitely make an attempt to lay things out in a way that you can tell where each section is. But quite frankly, it’s not working, simply because it’s clutter-fest. You don’t need to display 10 copies of a game. One is just fine. You don’t need to have six of your magazines on display. One front and center is enough.

2. The store is way too cramped.

Naturally, the first bullet point results in this second one. The aisles are too narrow. It makes the place very claustrophobic. Unless you are petite like a Japanese school girl, you feel like a bull in a China shop walking through a GameStop.

If you want a more inviting store, you need to create a greater sense of space. Either get bigger retail space, or rotate more of your inventory so that you have less on display, but it is updated more often. Instead of showcasing a ton of ads and displays — which I reckon is necessary because of the MDF that goes into a retailer — they can do things like use LCD monitors to rotate 10 ads on a display, rather than display all 10 ads on a wall. 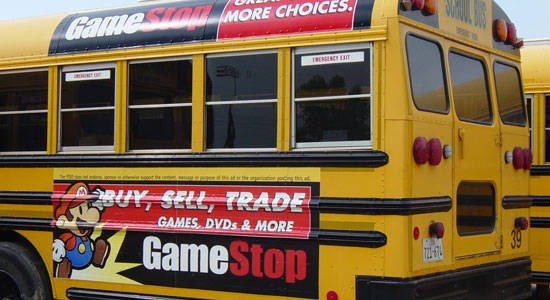 I don’t know what it is about these small game stores, because there is a lingering odor. I don’t think it’s the staff, or typical nerdy customers, as I’m sure some people would like to point fingers at. I actually think it may be because of all the used games they sell.

I recall before that GameStop had a much fresher new store scent. Ever since they started to sell used games, there is a hint of an odor that just isn’t so fresh. If you think about it, they display hundreds of boxes that have been owned by random people, and I’m sure many games weren’t stored in clean environments. You stack up enough of these used games, you are bound to get a funkiness in the air. I’m sure having the store so crowded isn’t helping the ventilation.

You’d be surprised how certain smells can be more inviting than others. Many companies even do research into what smells they pump into their stores to increase sales.

While you gotta give credit to the staff since they generally try to be on the ball, I’ve run into too many of them that would make the average casual gamer uncomfortable. Perhaps it’s the long fanboy ode to what games they love, or the not-quite-there training they get when they have to hawk their magazines, and membership service, which results in overzealous pitches. Even I, who has been shopping there for years and am borderline fanboy, sometimes can’t wait to get out of the store, because it’s just too much.

When you add all these things up, it basically results in a retail environment that is intimidating for anyone but the hardcore gamer. This is a fundamental issue that can’t be just addressed by adding more things to make the casual gamer happy. They need to tone down the hardcore stuff to make it less intimidating. They need to rethink their overall store atmosphere.

Now, before all the hardcore gamers shout out “Who cares about casual gamers! Bah!” — I for one would love to have my girlfriend, and mom, and gay uncle Charlie buy more games. Share my love of gaming with them.