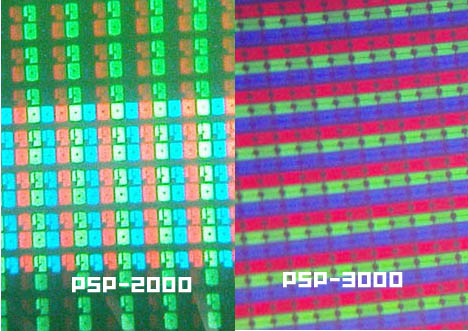 Along with everyone else, we had beef with the new PSP’s screen. The 3000 model has scanline and interlacing issues that Sony called “hardware features,” but then didn’t say much else. It wasn’t until some nerds at Logic Sunrise put the screens under a microscope that the answers to these issues were uncovered.

With the help of a 40x microscope, the difference between a 2000 and a 3000’s screen becomes apparent. On the new screen, the pixels seem to be arranged horizontally. On top of that, the blue pixels on the 3000 were brighter. We’re not scientists, but it’s pretty clear to see where these issues come from.

Too bad this isn’t something that can be “fixed.”

In the end, if you’re playing a game, you’re not going to be thinking about the color of the pixels and their horizontal arrangement. In fact, I think gamers would only think about this if two different units were placed side to side. So it’s not that big of a deal. Still, it’s interesting to see the difference between the two under a microscope.