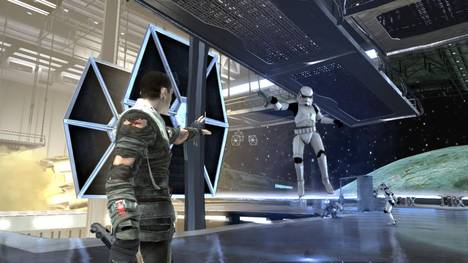 I’m prepared to dodge stones: I’m not a huge fan of Star Wars or its universe. I get it — really, I do — but I’ve never really gotten it. But if a Barbie game looked as kickass as LucasArts’ Star Wars: The Force Unleashed, I’d be just as excited about that.

So it’s with great excitement that I bring news of a The Force Unleashed demo that is slated to hit PlayStation Network and Xbox LIVE Marketplace next month. The demo will give players a handful of force powers in a demo version of the game’s “Tie Fighter Construction Facility” level which, if early video of the game is any indication, is going to get trashed.

LucasArts’ marketing dude Matt Shell confirmed the demo in an interiew with G4 TV, stating that the demo would have a “unique ending” for demo players. Anyone care to guess what that might mean?

The full version of Star Wars: The Force Unleashed is scheduled to hit retail Xbox 360 and PS3 on September 16. If you’re too impatient to wait for the demo or too lazy to play it yourself, be sure to check out our hands-on preview.