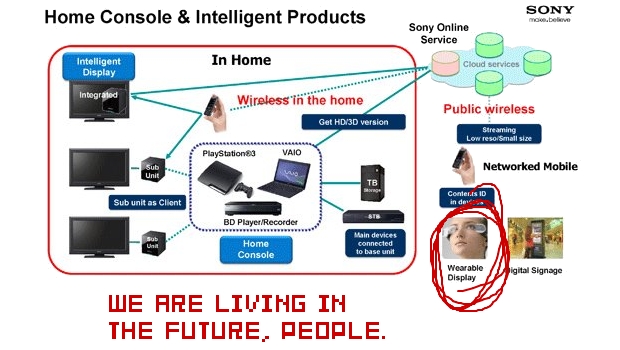 World domination. It isn’t an easily achieved goal. Talk to any dictator with aspirations to rule over Europe or Asia in recent history and they’ll tell you, it don’t come easy. Sony has a plan though, and it starts by taking over every electronic you own and then building SkyNet. Step one in that plan is to use PSN as the backbone for all of its online service offerings. The tentatively named Sony Online Service was revealed at Sony corp.’s global strategy presentation and is a way for Sony to offer a single user experience across all of its electronic platforms. Part of this plan is that premium service that was announced at the same presentation.

At the meeting Sony Computer Entertainment CEO Kaz Hirai outlined the strategy, saying that the system would support a single user ID across the entire service and offer consumers an “enhanced value” that will be delivered thanks to SOS’s ease of use and universality. “The service will be launched economically and quickly by leveraging the PlayStation [Network] service platform. For example, key assets for creating a network service management system, payment system, and content distribution system will be shared with the PSN platform so that initial investment risk can be minimized,” Hirai said while his presentation showed off PSPs, PS3s, Blu-ray players, Sony’s electronic books, laptops, Walkman MP3 players and pretty much every other electronic Sony makes.

Sony also wants the SOS to expand into its mobile line-up and challenge iTunes’ dominance of the downloadable media market. To demonstrate that Sony could be successful at this Hirai pointed out that the PSN already has 33 million registered users and those users download 25 petabytes of content each month. He then sat down in a chair, began to pet his white cat gently and laugh maniacally as he pointed out that the company expected to sell $50 billion dollars worth of downloadable goods on the service during the fiscal year ending March 31, 2010.