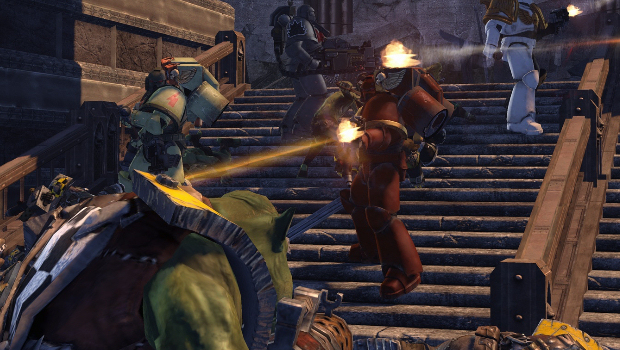 In a week dominated by Battlefield 3 and Uncharted 3, it seems incredibly silly Warhammer 40,000: Space Marine to release a new mode, but that’s the situation we’re in. For those of you still playing Relic’s Ork-blasting action game, the “Exterminatus” co-op mode is now available to download.

You can grab the content via PlayStation Network and Steam right now. It’s due to hit Xbox Live pretty soon.

Exterminatus is a fairly typical survival mode in which up to four players take on waves of enemy creatures. It’s pretty fun stuff, and ought to be a good way to get those final level upgrades if you haven’t already nabbed them.

Still, for those of us who stopped playing a while ago, I can’t see it as a major incentive to put the disc back in, at least when faced with such an avalanche of alternative titles. At least it’s free, and pretty fun, so grab it if you’ve hung onto a copy of the game.