Hold off on getting the game until our full review

Our review for SimCity is coming, but server issues are making the game unplayable. I’m sure you’re already aware of the need to always be online to play, but it goes a lot deeper than just a DRM issue. Data isn’t stored locally, so server issues can destroy save games and potentially cause the loss of dozens of hours of gameplay. Amazon has even pulled the game from their digital store.

SimCity has a big focus on region gameplay, where cities can be connected with up to fourteen other cities. This concept is interesting and has some promise, but it just fails to work correctly with the way the servers are right now. Basically, the game is broken, and not worth buying at all right now. 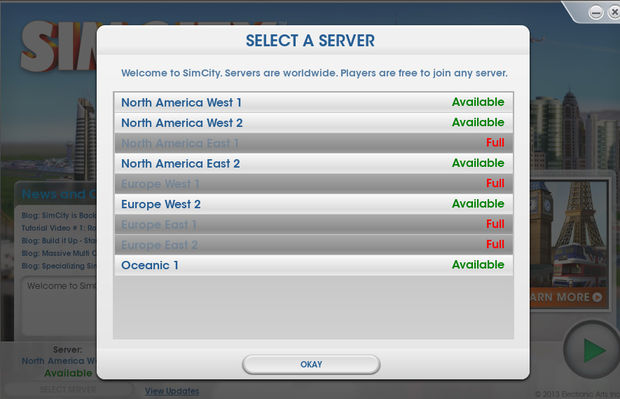 One of the biggest changes about the new SimCity is that the map size is smaller compared to past games, which I find disappointing. It’s a really small map, and it’s impossible to do everything with one city. There is a big push to focus the city on a specific thing, and to depend on other nearby cities for stuff like power, sewage treatment, or education. So I created a private region to test out having one city filled with industry, while another one focused on schools and tourism.

This multi-city approach could work and compensate for the tiny map size, but with the current server issues I’m not sure how well this actually functions. My cities aren’t saving correctly, which is making it hard to tell what’s going on. My industrial city was setup to receive sewage waste and trash from my nicer residential city, and this seemed to work until the game refused to acknowledge that the other city was there. This caused a temporary backup of waste and trash, and all of my citizens starting yelling at me. Eventually the entire region reset to a save from a couple days ago, causing me to lose at least six hour of gameplay.

It’s disappointing that there is no option to play offline and have data saved on my machine instead, but if they can get the servers running correctly it might not be an issue. Sadly, it is an issue right now. I enjoyed my initial time, but I’m still undecided about my feelings on a lot of the design decisions. I am skeptical, but also hopeful that it could work, but it all depends on the servers running correctly. 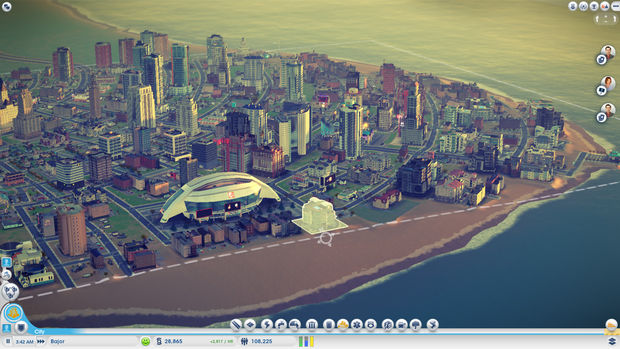 There are multiple servers and EA is working on adding more, but the problem with this is that cities don’t migrate across servers, meaning your saved games are stuck to the server you started them on. Even if today you decided “Hey, the European server isn’t full, I’ll play on that!” it won’t matter. You could lose access to your cities once the new influx of players come in after the European release.

I am fighting with the same connection issues that everyone else is facing. I have lost entire cities to server issues, and playing is almost completely impossible right now. Don’t buy SimCity, not yet at least. The game isn’t done, and you would be spending $60 to be a part of what boils down to a beta test for their servers. Save your money and see how things pan out.

I have spent around forty hours in SimCity for our review and have had a good look at a lot of the features, but the networking issues are holding back my progress. I can’t play, and neither can a lot of other people. This review is going to be for you, our readers, so what do you think would be fair? Should we review the game as it is, or wait and see if these server issues can be resolved?