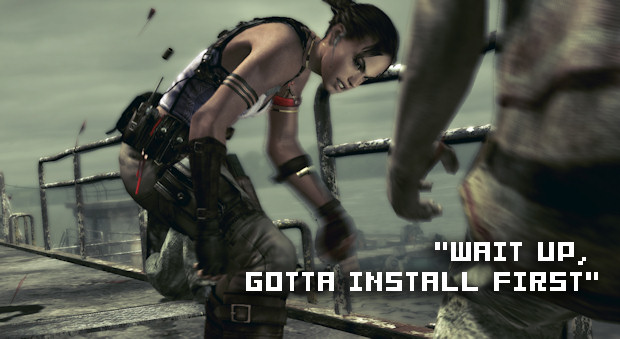 Oh dear. It looks like the PlayStation 3 version of upcoming action game Resident Evil 5 will come with yet another annoying forced install that serves no greater purpose than to piss people off. MTV is reporting that their retail PS3 version of the game demands that 5GB of space remain on the PS3 hard drive — the typical calling card of forced installs.

We don’t have a retail PS3 version in our clutches (we’re rocking a debug 360 version) but be warned that if this is the sort of thing that affects your buying decisions, it is there for consideration.

This whole mandatory install thing is incredibly annoying. I love my PS3, but I absolutely detest the amount of waiting around that needs to be done in order to get into a game. System updates take forever to download, game patches are considerably lengthier acquisitions than on the Xbox 360, and even things like installation of PSN games after download just reek of unnecessary bullsh*t that gets between me and my videogames. Far too much of my PS3 experience has been spent sitting and waiting for the console to gets its act together. We live in a “must have now” society, and the PS3 is too plodding and pondering sometimes.

If installs were optional, that would be one thing, but the fact that they’re forced makes them incredibly obnoxious. Having to install every individual chapter in Metal Gear Solid 4, for example, was atrocious. Please Sony — let’s put choice into the hands of the players. Some of us don’t mind an extra second of load time if it means we can play our videogames as soon as we actually put the disc in the system. Remember when videogames just played without all the pointless bells and whistles? Those were good days.