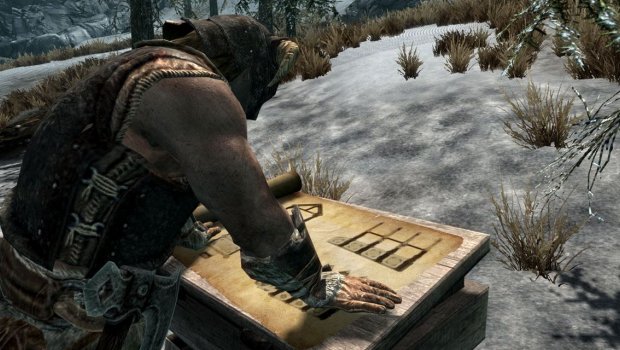 The Elder Scrolls V: Skyrim received it’s Hearthfire home-building DLC this week, but only if you have the Xbox 360 version. PC users will have to wait, while PS3 users haven’t even got Dawnguard — and may never get it.

Naturally, Bethesda’s Facebook page is inundated with complaints, but interestingly it seems that a number of fans have been able to offer some solutions — either buy an Xbox 360 or shut up. It’s a nice little example of the modern gamer attitude, where logging a complaint is no longer a valid consumer option, and you should just keep giving the industry more of your money until your problem goes away. Well … I guess it’s a solution that works in a perverse sort of way.

If you’re a PS3 user steamed at Bethesda for its handling of games on your preferred system, you’ll want to read this fantastic advice from a range of experienced gamers. It’s the first step on the path to happiness.

[Thanks for spotting this, Charlie!]

“Love how when PS3 users get an exclusive game or DLC they rub it in then when it happens to them they rage about it ha, heres an idea why not trade in your very clearly inferior console for an xbox? And stop crying !!!!“ – Daniel Anderson.

“PS3 users quit complaining. If it sucks that much to you, quit being a bunch of cheapo’s and go get a 360. Then you will realize why 360 users pay for their content. How often do you see PS3 go out and provide their fans with exclusive content. THEY DON’T! Xbox puts our hard earned money to where it should go, video games. AND THEY KNOW THE ONES TO SPEND THE MONEY ON FOR SURE!” – Logan Phillips.

“Oh boo hoo! Not Bethesda fault that PS3 is crap to code for! Just buy it on PC since you obviously have problems with getting a XBOX! I have it for 360 and PC! As well as Dawnguard on both machines! Just buy a second copy on steam! And stop complaining!“ – Anthony Darryl Abeyta.

“The PS3 will most likely not be getting the DLC! Don’t you guys already know this! This is for XBOX users who actually pay for online service that in turn Microsofts spends the money on EXCLUSIVE content! Get over it, your system sucks and you all know it!“ – Anthony again … he just really wants you to know!

“Maybe the reason we (xbox players) got them first is we actually pay for a service rather than be cheap and use an inferior service because its free xbox buy rights to early content because its users pay its not bethesdas fault you ps3 players don’t get DLC its Sonys blame them and buy a console that cares about its customers!” – Jack Brown.

“There are no ‘AMAZING’ PS3 exclusive titles… Average ones at best!” – Stuart Robb.

“Were lucky Microsoft actually kno how to make a console, people say the ps3 is more powerfull etc, yeah ofcourse it is lol well…. enjoy ur extra bit of power, im off to play skyrim an all the dlc 🙂“ – Doran Doz Seddon.

“I love PS3 people complaining about no DLC. What about Morrowind that was never on PS2, not to mention 4J studios ported Oblivion over to PS3 in the first place. Your lucky you even got Skyrim, they could have never even made it for PS3. So just let them take their time in working on the DLC for a system they never worked with before. Or you could get a PC that can run it or a 360. The choice is yours.“ – Jeremy Jeffries.

“Anyone who truly truly is an Elder Scrolls player will in no doubt appreciate this cheap and cheerful add on. Hearthfire is for true fans of the series much like any other previous dlc. The only people complaining are pc and ps3 users. Bethesda signed an exclusive 2 DLC deal with Microsift before they released Skyrim. This info can be read on wiki and other related pages. I played this dlc today and it is great, new, fresh ect. All xbox owners should play this game. All ps3 owners should just go away.“ – Adam Jeffryes.

“You guys complaining about PS3 not getting stuff, blame Sony. Bethesda tries hard to get stuff released on all platforms at the same time but Sony sucks for getting stuff.” – Jason Radeke.

“All I hear and see is QQ about why its not on PS3. Id suggest you all make the wise decision and buy an xbox already. With all the crap Sony has put you through, why havent you bought an xbox ages ago? oh ya thats right…some people like their account and credit card information stolen (insert darcastic face)” – Tanner “Darcastic Face” Bills.

“Oh ps3 gamers…I would feel bad if your consoles main selling point wasn’t free online play haha why don’t you get a real piece of hard ware instead of that flimsy pile of trash.“ – Matt Moffett.

“It’s like racism but with consoles. Awesome job Bethesda.“