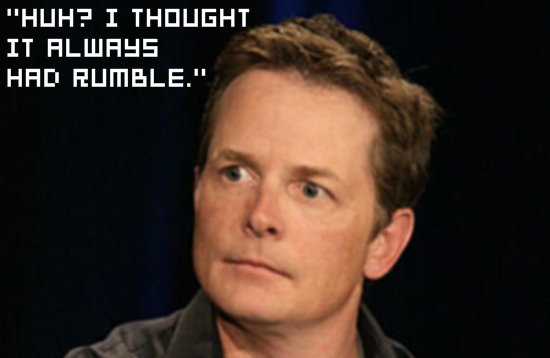 We pretty much knew this was coming eventually and now it’s been all but confirmed, barring an official press conference. After famously deriding rumble as a last-gen feature, Sony has demonstrated it was pulling the “I never loved you anyway” card that males use when their girlfriends leave them, as the company swallows its pride and puts rumble into PlayStation 3 controllers. The news was confirmed by IGN who felt the shakes when playing Burnout Paradise at TGS’07.

The controller looked exactly like the Sixaxis, save for a sticker that labelled it as “RUMBLE.” IGN’s Anoop Gantayat also noted that it was considerably heavier than the standard Sixaxis.

This leads to a few questions. Firstly, how is the new Sixaxis going to be sold? Will it come packaged as standard in future PlayStation 3 boxes? Will it be marketed as an optional attachment? Will previous games released before the new controller add in rumble features, possibly through a downloadable patch? How does this affect Talladega Nights? Most importantly though, how many “last gen lol” comments is this going to get from gamers? Humble pie tastes of humble, I heard.

Seriously though, well done for Sony finally dropping the act and joining the rest of us in the last generation.