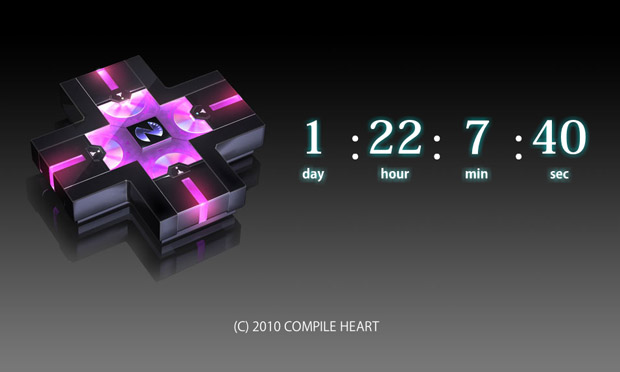 Compile Heart has a countdown page going. There’s one day and 22 hours left on the countdown. At first I had no idea what that thing in the picture is. It looked like an ’80s version of a Bang & Olufsen on-wall CD player. Now I know. More on that later.

The URL has “np_countdown” in it, so we’re guessing this is for upcoming PS3 role-playing game Neptune.

What’s Neptune? It’s from the makers of Record of Agarest Heart, and it’s coming to the PlayStation 3 this summer. It’s about a videogame console named Neptune. (Is that a nod to the Sega Saturn?)  Believe it or not, that thing above is the console, and it transforms into a girl. The game is set in the videogame industry, says the latest issue of Famitsu. Nice.

No word yet on a U.S. release.

[Update: Hit the jump to see more details on the game’s world. There’s worlds inspired by the Wii and Xbox 360!]